What Happened to Nuclear Rockets? 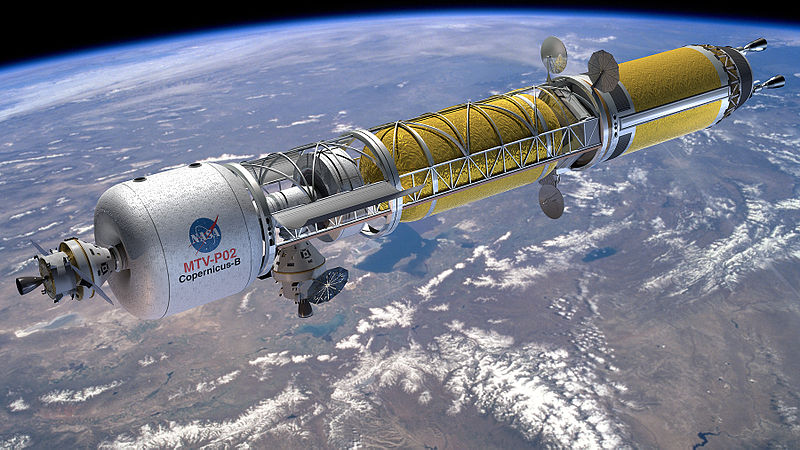 With NASA mulling plans to take astronauts beyond the orbit of Earth for the first time in four decades, the agency needs to take a hard look at other forms of propulsion - including nuclear. Image Credit: NASA

While the Apollo Project was taking all the limelight in the ‘sixties, scientists and engineers at Los Alamos Scientific (now National) Laboratory, New Mexico, were working on a way to send humans rapidly to Mars and beyond. They were building and testing nuclear thermal rockets – propulsion systems that, when fully developed, could send manned ships to the Red Planet in a mere four months and the moons of Saturn in just three years.

Now NASA is revisiting those old nuclear rocket designs with an eye to using them as part of the upcoming Space Launch System and possibly for crewed Mars excursions.

A nuclear thermal rocket (NTR) works by heating a fluid – liquid hydrogen is ideal for the job – using a nuclear reactor, and then allowing the hot gas to expand and escape through a nozzle to produce thrust. Being more fuel efficient and lighter than a chemical rocket, a nuclear rocket can in theory reach much higher speeds. But the engineering challenges in building a safe, practical one are considerable.

The US Air Force started proof-of-concept tests in nuclear propulsion at Oak Ridge back in the late 1940s before it lost interest in powering ICBMs this way. NASA’s involvement in the field stretches back to 1955 and the advent of Project Rover, which picked up where the Air Force left off, with the goal of building nuclear rockets for use in space. Responsibility for designing and putting together the reactors lay with the Atomic Energy Commission, and the project was managed by the Space Nuclear Propulsion Office (SNPO).

NASA’s side of Project Rover was called NERVA (Nuclear Engine for Rocket Vehicle Application). At the end of 1968, this had been so successful that SNPO was able to certify that the most advanced NERVA, based on the KIWI reactor and known as the NRX/XE, met the requirements for a manned Mars mission.

Ambitious plans were drawn up to use NERVA rockets as space tugs to boost payloads from low Earth orbit to much higher orbits and to power the upper stage of a more capable Saturn V. But even as it seemed nuclear space propulsion might become a reality – and sooner than expected – budget cuts in the US space program completely undermined it. Congress lost its appetite for a manned assault on Mars and the Nixon Administration brought the Apollo program to an abrupt end and, with it, the Saturn production line. Los Alamos kept Project Rover running at a lower level until 1972 when it was finally shelved.

Back to the future

Now, forty years later, interest is stirring again in the use of nuclear engines, both in the upper stages of launch vehicles and, in the longer term, as the main propulsion system for deep space missions. At NASA’s Marshall Space Flight Center work has begun on a three-year project known as the Nuclear Cryogenic Propulsion Stage (NCPS) which could form part of the upcoming Space Launch System. NCPS has its roots in NERVA but will take advantage of 21st century technology to achieve higher reactor core temperatures and thrust-to-weight ratios.

Since above-ground nuclear testing has been universally outlawed since the last time NASA  experimented with NTRs, researchers are instead using Marshall’s Nuclear Thermal Rocket Element Environmental Simulator (NTREES) – a device that can model many of the key elements of a space reactor using non-nuclear materials. Optimism is growing that a first-generation nuclear cryogenic propulsion system could help loft heavy cargo and science payloads into Earth orbit and propel human explorers more quickly to Mars thereby reducing the crews’ exposure to harmful space radiation. Beyond that, further development of such a system could provide the kind of high-thrust, high-speed means to take human crews deeper into the solar system.

Thank you, David, for your webpage regarding NTR computer modeling at the Marshall Center. I find this to be very interesting and not a little exciting for many reasons and for many areas of development. Certainly I am also aware of and excited by SpaceX but at some point we will need to make that leap to nuclear. The numbers just can’t be denied.

Are you aware of any routine updates on this NASA nuclear project? After almost a year I would hope that some have accrued. While recognizing that it is a 3 year project and contains the knee-jerk N-word, I would like to keep tabs on developments.

NTREES is actually a large facility which can reproduce the conditions (minus the radiation) which would occur inside a nuclear rocket engine during operation. Fuels can be heavily instrumented and safely tested to failure in the device. It is also licensed by the NRC to handle uranium bearing fuel elements. This type of testing is fairly inexpensive and yields considerable operational data.