Vice president: US astronauts on Moon within 5 years 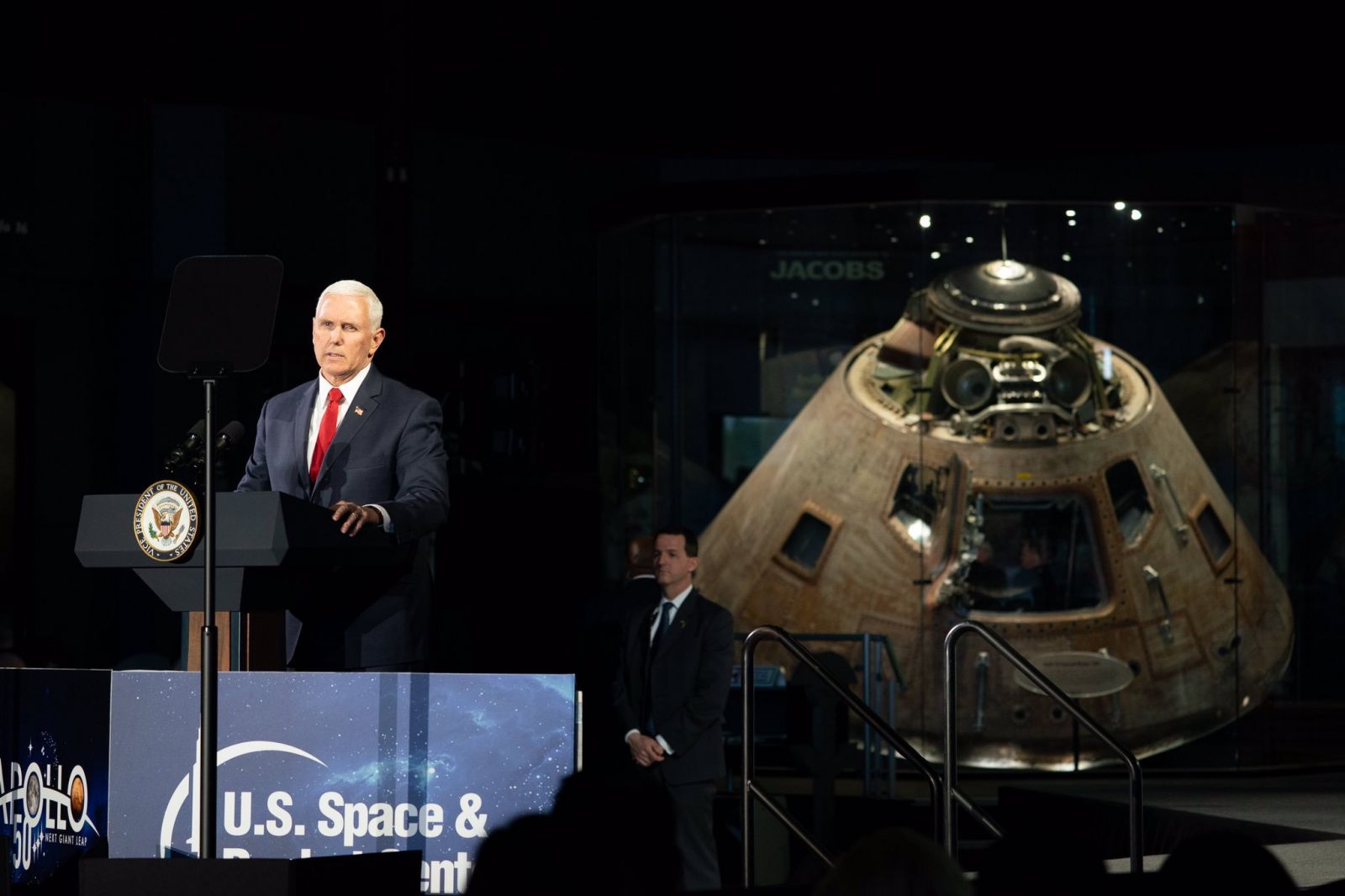 Vice President Mike Pence lit a fire under the feet of all involved in returning U.S. astronauts to the Moon, telling NASA to do so by 2024 using “any means necessary.”

On March 26, 2019, at the fifth meeting of the National Space Council, an advisory body led by Pence, it was called for NASA to return humans to the Moon, specifically to the lunar south pole, by 2024. Should the goal be achieved, it would be by the last full year of the Trump administration, should he win a second term in 2020. 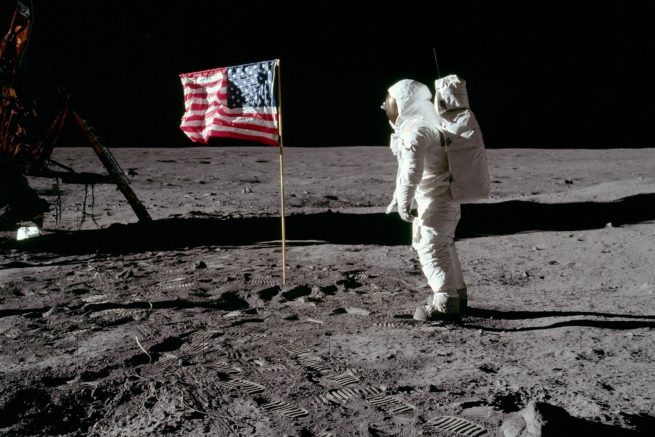 Nearly 50 years have passed since the United States first landed on the Moon and 47 years since the last person walked upon its surface. Photo Credit: NASA

“Just as the United States was the first nation to reach the moon in the 20th century, so too will we be the first nation to return astronauts to the moon in the 21st century,” Pence said at the Marshall Space Flight Center before the National Space Council meeting began. “I’m here on the president’s behalf to tell the men and women of the Marshall Space Flight Center and the American people that, at the direction of the president of the United States, it is the stated policy of this administration and the United States of America to return American astronauts to the Moon within the next five years.”

Instilling a sense of urgency

Under the plan before Pence’s speech, NASA was hoping to return astronauts to the surface of the Moon by 2028. It would involve using a variety of commercial rockets, the Space Launch System, commercial resupply and refueling ships, commercial landers, and a small space station-like outpost in a highly-elliptical lunar orbit.

However, critics argue that this approach would take too long. Additionally, the Space Launch System, which is years behind schedule, isn’t expected to launch until 2021 at the earliest.

Without mentioning names, Pence suggested that Boeing, the prime contractor for SLS, figure out a way to speed up its development schedule for the giant rocket or NASA would move on.

“I call on NASA to adopt new policies and embrace a new mindset,” Pence said. “If our current contractors can’t meet this objective, then we’ll find ones that will.”

Pence made it clear that the Trump administration wants to instill a sense of urgency to return astronauts to the Moon.

“It took us eight years to get to the Moon the first time 50 years ago, when we had never done it before,” Pence said. “It shouldn’t take us 11 years to get back.”

The Space Launch System has been in development since 2011 and was supposed to have its first launch as early as 2017. However, that was since delayed to 2020 and now even farther unless Boeing and NASA can speed up the test schedule. Image Credit: James Vaughan / SpaceFlight Insider

‘By any means necessary’

Pence said there have been incredible breakthroughs in space technology over the decades since the Apollo program ended in 1972 and today there are technologies to go farther and more-safely than before.

“Here in Huntsville and throughout this program, we must accelerate the SLS program to meet this [2024] objective,” Pence said. “But know this, the president has directed NASA and Administrator Jim Bridenstine to accomplish this goal by any means necessary.”

Pence said NASA, in order to succeed, must focus on the “mission over the means,” and consider every available option, public or private. He said the Trump administration isn’t committed to any one contractor.

Pence said failure to meet the goal of humans on the surface of the Moon in five years is not an option and will require renewed focus and a “relentless will” to achieve the mission.

“NASA must transform itself into a leaner, more-accountable and more-agile organization,” Pence said. “If NASA is not currently capable of landing American astronauts on the Moon in the five years, we need to change the organization, not the mission.”

Speeding up development of SLS

Not long after Pence’s speech, Bridenstine was able to make several comments regarding what NASA needs to get to the Moon by 2024. He said he understands that the vice president wants the SLS development schedule to speed up.

Bridenstine also said that he opened the conversation to having commercial rockets fly the uncrewed Exploration Mission-1, the first test flight of the Orion spacecraft around the Moon. 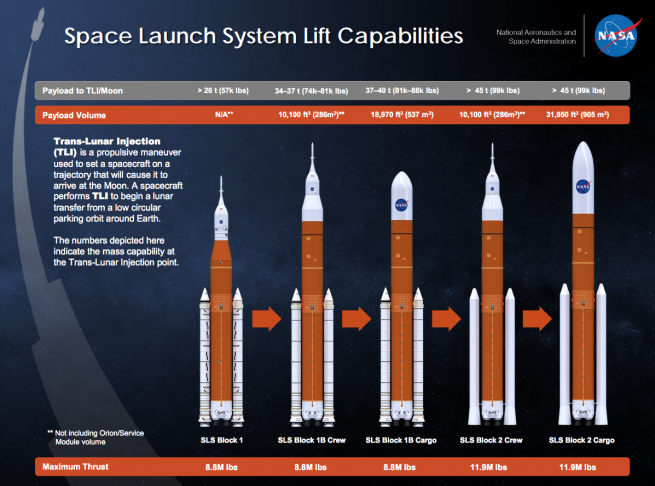 NASA’s Space Launch System was designed to evolve over time, from its initial Block 1 configuration up to the Block 2. Image credit: NASA

“There is an opportunity there in the future,” Bridenstine said. “I will also tell you, if we want to achieve 2024, we have to have SLS, we have to accelerate its agenda, and when we talk about being able to co-manifest payloads, when we talk about putting humans on a spacecraft with habitation modules at the same time and delivering to the Moon all at once, we’re going to need an exploration upper stage and were going to need that probably early, by EM-3, the third launch of the Space Launch System.”

While Bridenstine told the vice president what he believes is needed, it is important to note that the president’s fiscal year 2020 budget request does not allocate any money toward this exploration upper stage, which would form Block 1B of the SLS.

Bridenstine told Pence that NASA and Boeing are looking at every way possible to only do what is absolutely necessary to get to that first launch, including getting rid of tests that aren’t deemed necessary for the first flight.

“Mr. Vice President, I can tell you I am confident we can get to that first launch in 2020 for SLS and actually fly a crew capsule around the Moon,” Bridenstine said.

Bridenstine also said he believes the Gateway is essential for this 2024 plan, as it is designed to be a “reusable command module” with propulsion that can give access to more parts of the Moon than possible before, including the lunar south pole. 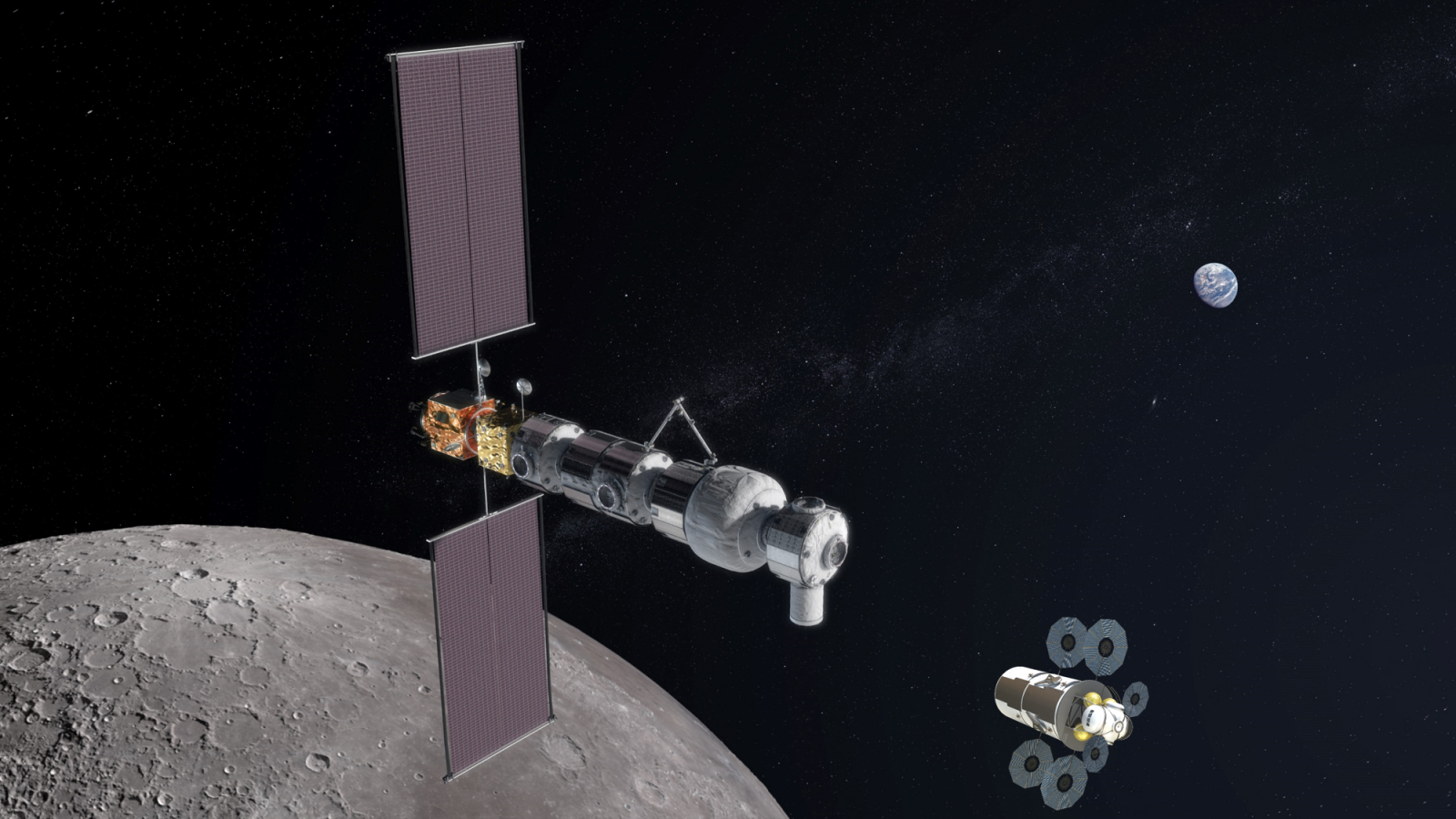 An artist’s illustration of a completed lunar Gateway flying around the Moon with a commercially-developed lunar lander. Image Credit: NASA

However, with all of the talk of ambitions timelines, little was discussed about how much money this new mindset of “urgency” will cost and if Congress, which holds the purse strings, will go along with this plan.

Currently, the SLS program spends around $3 billion a year. If no new funding is allocated, nothing is likely to change.

If the Exploration Upper Stage, SLS, Gateway (at least part of it) and a human-rated lunar lander are all to be developed, tested and flown in the next five years, billions more in funding will likely be required annually.

In a statement released by The Coalition for Deep Space Exploration, an industry advocacy group, the organization said it supports the renewed focus on urgency and aggressive timelines. However, the group is aware of the resources that would be required to meet these objectives.

“Bold plans must be matched by bold resources made available in a consistent manner in order to assure successful execution,” the statement reads. “Similarly, the contracting mechanisms by which spacecraft, facilities, systems and supporting equipment are incorporated into a robust Moon-to-Mars architecture must be applied in a rapid and flexible manner with only the absolute minimum of bureaucratic process and oversight necessary to succeed.”

The Coalition could not be more precise in its response.
If you want it, pay for it.

Where is Elon Mask and SpaceX in that story?

In the Falcon Heavy photo 🙂

Only if his cheap-ass party and his orange boss monster are willing to cough up the funding for it.

Am I the only one who thinks he’s trying to buy votes?

Good. Trump and he’s team know how to light fires under slow and outdated projects and organizations. I think this will satisfy most space loving folks as we can’t reach mars before testing our stuff on the moon. This mission will benefit all sciences and technologies and the sooner it happens the better. I trust The NASA administrator will have an open line to the president and his team and would figure out what and how much is needed and when. I also sincerely hope this will become a bipartisan mission as it will benefit all. Much love from South Africa! – Chris

Funding for this? Hopefully NASA won’t be required to re-allocate funding for current space missions to fund this boondoggle.