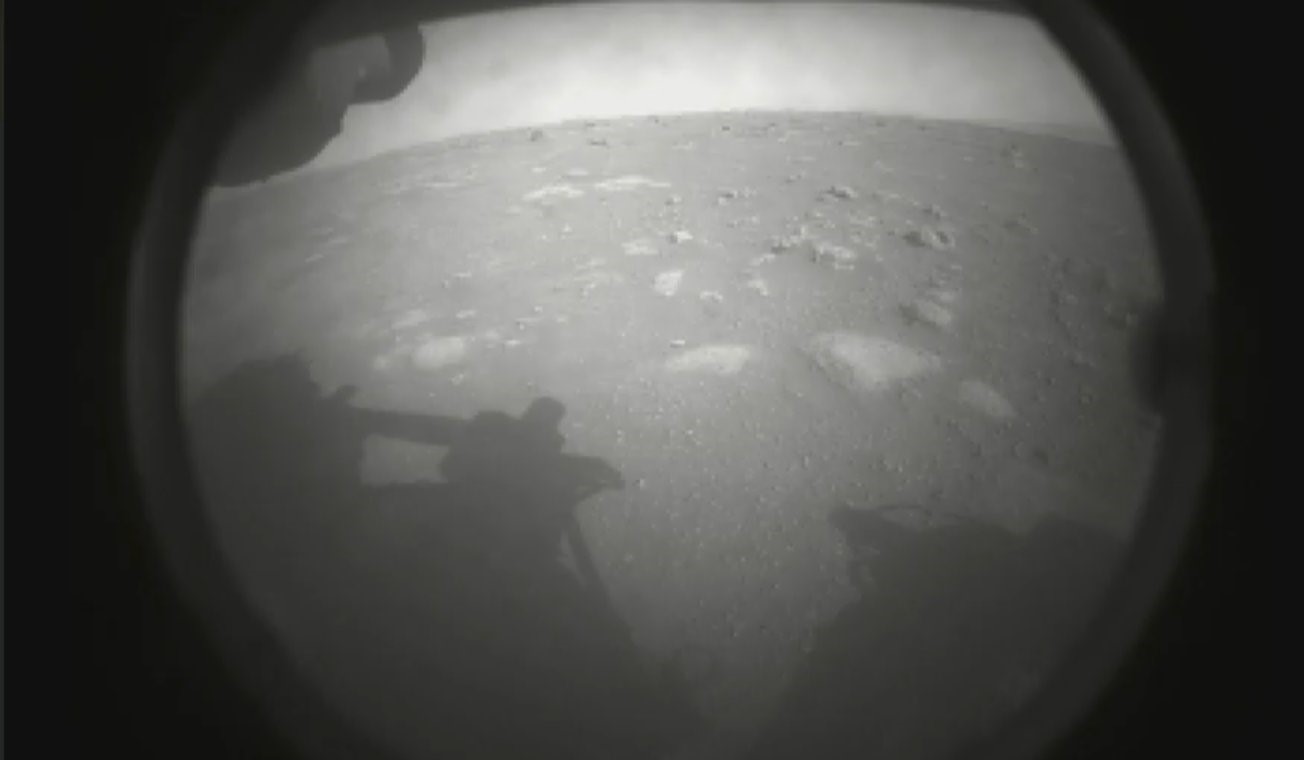 The first photo of the surface Jezero crater on Mars sent back by NASA’s Perseverance rover. Credit: NASA 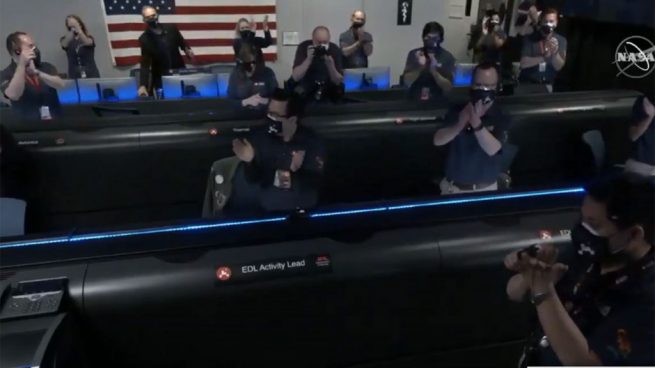 The rover was named Perseverance by seventh-grade-student Alexander Mather of Virginia, the winner of NASA’s “name the rover” contest. According to Mather in his winning essay, all the names of recent past Mars rovers were after qualities possessed by humans: Curiosity, Spirit and Opportunity.

“But, if rovers are to be the qualities of us as a race, we missed the most important thing. Perseverance,” Mather said. “We as humans evolved as creatures who could learn to adapt to any situation, no matter how harsh. We are a species of explorers, and we will meet many setbacks on the way to Mars. However, we can persevere. We, not as a nation but as humans, will not give up. The human race will always persevere into the future”

Many at NASA have commented that the name could not have been more appropriately named. In the height of one of the greatest challenges in modern history, the coronavirus pandemic, teams at NASA, the Jet Propulsion Laboratory and United Launch Alliance persevered toward the launch and landing of the Mars 2020 rover.

Perseverance’s journey began atop an Atlas 5 rocket on July 30, 2020, when NASA and United Launch Alliance sent the spacecraft on its interplanetary journey. This 300-million-mile (470-million-kilometer) journey included several course corrections to ensure it arrives at the red planet at the right place and time for a landing in Jezero crater. 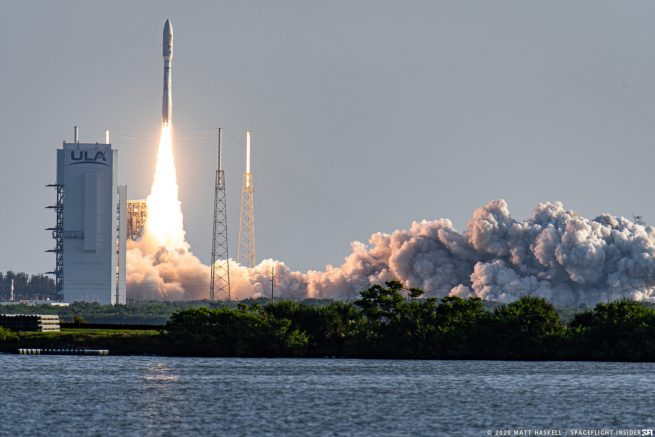 As the rover coasted toward the red planet, it was protected by a backshell, which covered the rover and descent stage and shielded them from potential hazards it could encounter on the way to Mars.

Approximately 45 days before landing, the vehicle began the approach phase. This included two trajectory correction maneuvers to make any last-minute adjustments as needed, to ensure a precise descent and touchdown. 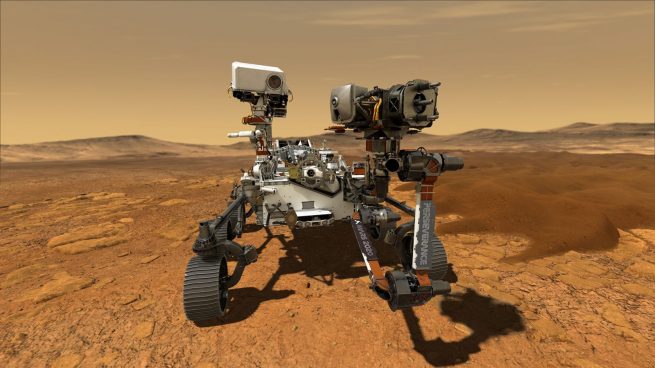 As the vehicle approached the Martian atmosphere, the outcome of the last seven months boiled down to just seven minutes in the entry, descent, and landing phase, infamously known as the “seven minutes of terror.”

Because the one-way light travel time was just over 11 minutes, this phase had to be completely automated as Earth-based intervention was not possible. By the time the first signals announcing the spacecraft was at the top of the Martian atmosphere, the a landing or crash would have already occurred.

Perseverance is also equipped with some instruments never before seen on any Martian probe; in particular for entry, descent and landing, two audio microphones that will be used for scientists to hear the sounds of the vehicle rushing to the ground.

The rover is also the first spacecraft to use terrain-relative navigation, allowing it to estimate its location during the final phases of its descent and landing with an accuracy of about 130 feet (40 meters), or better, according to NASA.

This is important as Jezero crater is the most dangerous location NASA has ever attempted to land at on Mars. While its landing ellipse is roughly 4.5 miles (7.2 kilometers) in diameter, it is littered with hazardous features, including large boulders, dunes and cliffs.

Scientists are eager to study this location as they believe an ancient river flowed into a lake contained by Jezero. Perseverance’s landing zone is site believed to be an ancient river delta that at one point may have contained a vast amount of water, and possibly even life. 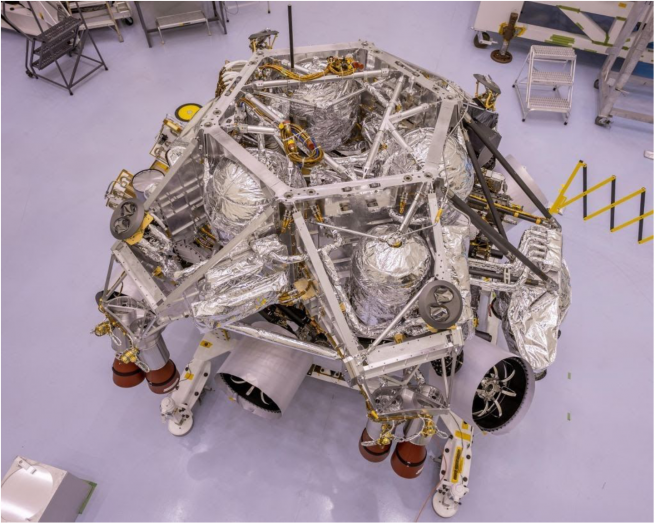 This image of the rocket-powered descent stage sitting on top of NASA’s Perseverance rover was taken in a clean room at Kennedy Space Center on April 29, 2020. Credit: NASA

The vehicle is equipped with additional cameras that allow scientists to observe the parachute deployment and the rover as it makes its way to the ground. However this data will not be relayed back to Earth until later this weekend or next week.

As the vehicle fell closer to the surface and the air pressure began to decelerate the craft, it completed a series of hypersonic aero-maneuvering turns to aid in the slowing of the vehicle.

At just about 8 mile (13 kilometers) above the surface, a parachute deployed to aid in the further slowing of the spacecraft. Engineers at NASA’s Jet Propulsion Laboratory were able to confirm the success of each milestone via several pings from the craft as it descended toward Jezero Crater.

The heat shield separated from the spacecraft roughly 20 seconds after parachute deployment, allowing the onboard hazard-avoidance technology to help safely guide the spacecraft down to the ground.

Roughly 350 seconds into the descent phase, the rover and descent stage separated the back shell and parachute.

The descent stage’s engines fired to slow the spacecraft down and precisely guide the rover to a proper landing spot. It then used the same technology as the famous “sky crane” that helped lower NASA’s Curiosity rover to the surface in 2012.

The descent stage sky crane lowered the rover to the surface, released it once wheel contact with the surface was confirmed, and then flew away to avoid any potential contamination to the Martian surface, or damage to Perseverance.

As expected, once a positive signal was established between the ground and Perseverance, the controllers at NASA’s Jet Propulsion Laboratory erupted in pure elation as the culmination of over 10 years of hard work, dedication, and perseverance came to fruition. 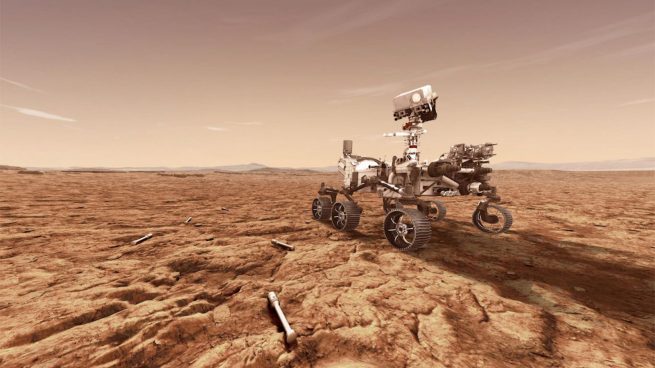 An illustration of the Perseverance rover leaving behind cached Mars samples. Credit: NASA

However, Perseverance is not alone on the red planet. It’s carrying a rotor-powered friend in the form of an autonomous helicopter known as “Ingenuity.”

This “drone” is ultimately a technology demonstrator and only has a single camera. However, it could serve as a proof-of-concept for future scout drones for future Mars rovers.

Now that Perseverance has settled on the surface, its science mission is set to begin. The core goals of the Mars 2020 mission are to seek evidence of past life that could have developed on Mars, and most importantly, pave the way for human exploration to the red planet.

In fact, the rover will also be collecting and caching samples, storing them in small tube-like devices before ultimately depositing them throughout its landing area. These are expected to be collected by another rover and ultimately launched back to Earth. However, this will require several more spacecraft to be launched to Mars over the next 10 years.