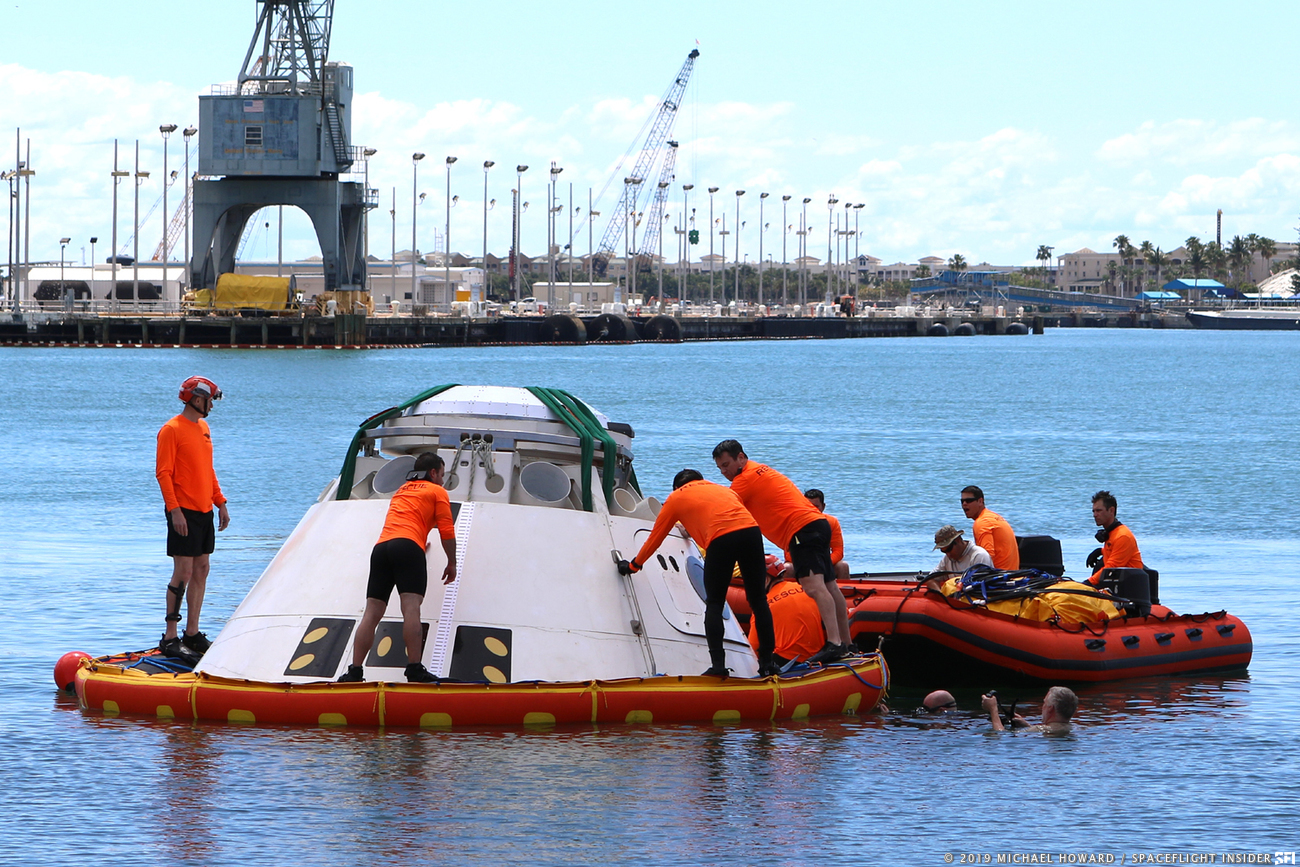 CAPE CANAVERAL, Fla. — NASA and the Department of Defense conducted a search and rescue training exercise for Boeing’s Starliner spacecraft at the Army Wharf in Port Canaveral. 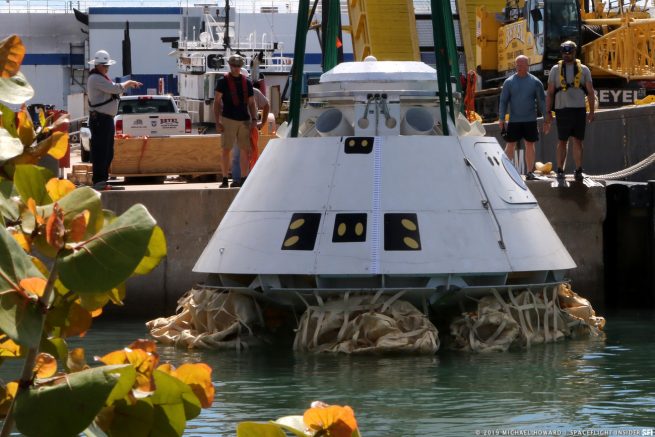 Following the exercise, the boiler plate was lifted out of the water. Photo Credit: Michael Howard / SpaceFlight Insider

More training over the coming days both at the Army Wharf and in the Atlantic Ocean is planned as the space agency and its commercial partners work toward the goal of sending humans into space from Florida before the end of 2019.

While the CST-100 Starliner is expected to return to Earth on land in the Western United States (using airbags to cushion its parachute-assisted landing), there is always the possibility of an off-nominal scenario of splashing down in the water because of an abort during launch.

NASA said the training exercise is an example of how the agency and its commercial partners are building safety into its systems, processes and procedures, adding it is “standard practice to conduct these exercises, and it was regularly done during the Space Shuttle Program.”

According to NASA, HSFS teams have supported all of NASA’s human spaceflight programs and will be on standby for Boeing’s Starliner and SpaceX’s Crew Dragon launches and landings as well as those for the space agency’s Orion missions. 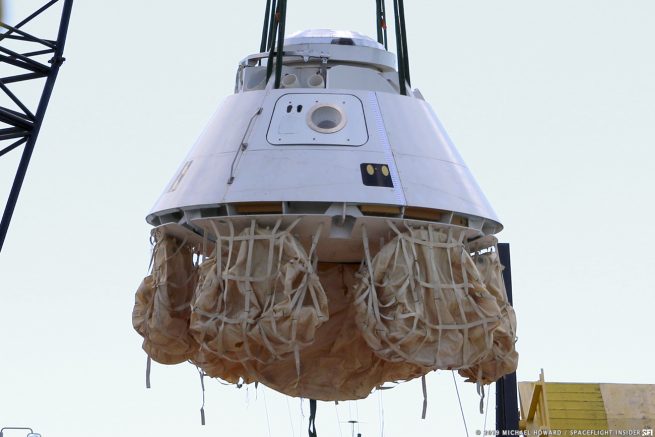 Boeing is planning to fly its uncrewed Orbital Flight Test mission no earlier than August 2019 with a crewed flight sometime afterword, likely in early 2020.

A pad abort test is also planned by the company sometime this year.

SpaceX has already flown its Demo-1 uncrewed flight test. It was expected to perform an in-flight abort test this summer and a crewed Demo-2 mission in the early fall. However, because of the “anomaly” during an April 20, 2019, static fire test of the SuperDraco engines on a Crew Dragon spacecraft, its schedule is now uncertain.

The apparent explosion is thought to have destroyed the capsule used for the successful Demo-1 mission, which splashed down in the Atlantic Ocean on March 8, 2019. The company was planning to use that vehicle for the unpiloted in-flight abort test.

Aside from the initial statement acknowledging the incident, first reported by Florida Today, SpaceX and NASA have been silent and no new information has been released.

Boeing also had an issue with its abort system in mid-2018, which caused a significant delay in Starliner’s development. 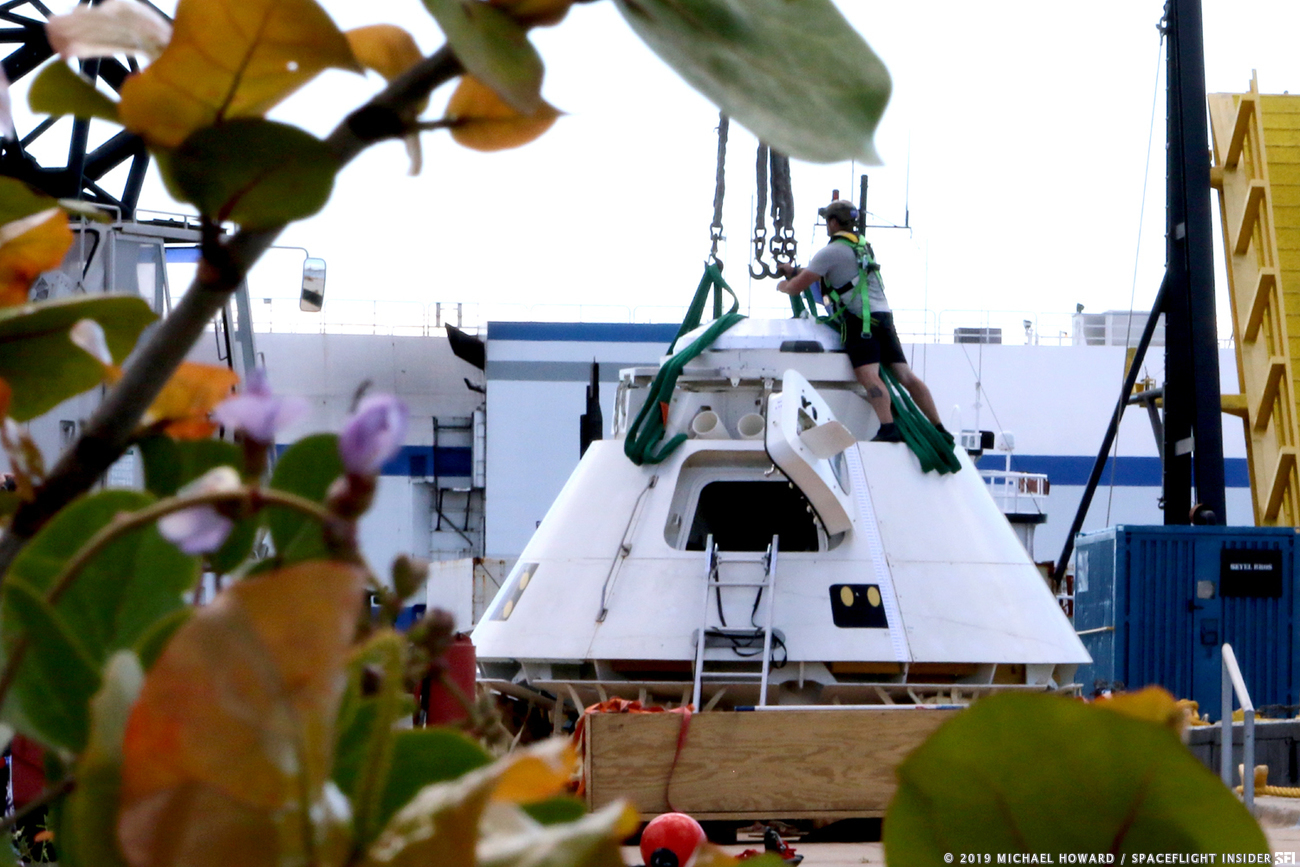