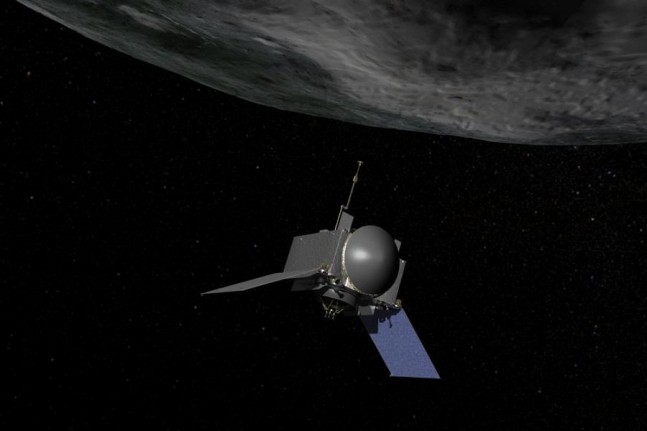 This is an artist's concept of NASA's OSIRIS-REx spacecraft preparing to take a sample from asteroid Bennu. Image Credit: NASA/Goddard

NASA’s Origins, Spectral Interpretation, Resource Identification, and Security-Regolith Explorer (OSIRIS-REx) mission is taking shape as an instrument that will explore the surface of an asteroid, has arrived at Lockheed Martin for installation onto the spacecraft.

The OSIRIS-REx Visible and Infrared Spectrometer (OVIRS) instrument will measure visible and near infrared light from the mission’s target asteroid Bennu that can be used to identify water and organic materials.

“The delivery of OVIRS to the spacecraft means the mission now has the capability to measure the minerals and chemicals at the sample site on Bennu,” said Dante Lauretta, principal investigator for OSIRIS-REx at the University of Arizona. “I greatly appreciate the hard work and innovation the OVIRS team demonstrated during the creation of this instrument.” The OSIRIS-REx Visible and Infrared Spectrometer, or OVIRS, will measure visible and near infrared light from the asteroid Bennu, which can be used to identify water and organic materials. Photo Credit: NASA/GSFC/Bill Hrybyk

OVIRS will split the light from the asteroid into its component wavelengths, similar to a prism that splits sunlight into a rainbow, but over a much broader range of wavelengths. Since different chemicals have unique spectral signatures, they can be identified this way.

“Through the team’s efforts, OVIRS has become a remarkably capable instrument, which we expect to return exciting science from the asteroid Bennu,” said Dennis Reuter, OVIRS instrument lead from Goddard.

The instrument’s spectra will identify volatile and organic-rich regions on Bennu. These data, in concert with OTES spectra, will guide sample-site selection. OVIRS spectral ranges and resolution will allow the creation of surface maps of mineralogical and molecular components including carbonates, silicates, sulfates, oxides, adsorbed water, and a comprehensive range of organic molecules.

OVIRS will observe the entire surface of Bennu over a wide range of phase angles of 3 degrees or less during the asteroid survey. Typical observations will provide global sampling of the surface with a spatial resolution of 20 meters at a fixed phase angle for measurements from a 3.1-mile (5-km) altitude. At low altitudes, the instrument will obtain high spatial resolution measurements.

OSIRIS-Rex, the first U.S. mission to return samples from an asteroid, is scheduled for launch in September 2016. It will perform the Earth gravity assist in September 2017. As planned, the spacecraft will reach its asteroid target in 2018 and return a sample to Earth in 2023.

It will bring at least a 2.1-ounce sample back to Earth for study. The mission will help scientists investigate how planets formed and how life began, as well as improve our understanding of asteroids that could impact Earth.

The spacecraft has already passed a crucial milestone by completing a Mission Operations Review (MOR). The MOR demonstrated the team’s progress in developing the operational processes needed to return a sample from Bennu.

The MOR, administered by NASA’s Goddard Space Flight Center, focused specifically on OSIRIS-REx’s operational readiness and its progress to launch. The panel of experts assessed the mission’s approach to data processing and analysis, commanding, and planning of the spacecraft and instruments, navigation, and the verification and validation plans required before the spacecraft takes flight.

At first glance, the fully deployed spacecraft looks like an Imperial shuttle from the early “Star Wars” movies.
Obviously there is a method to the angles of the solar panels.