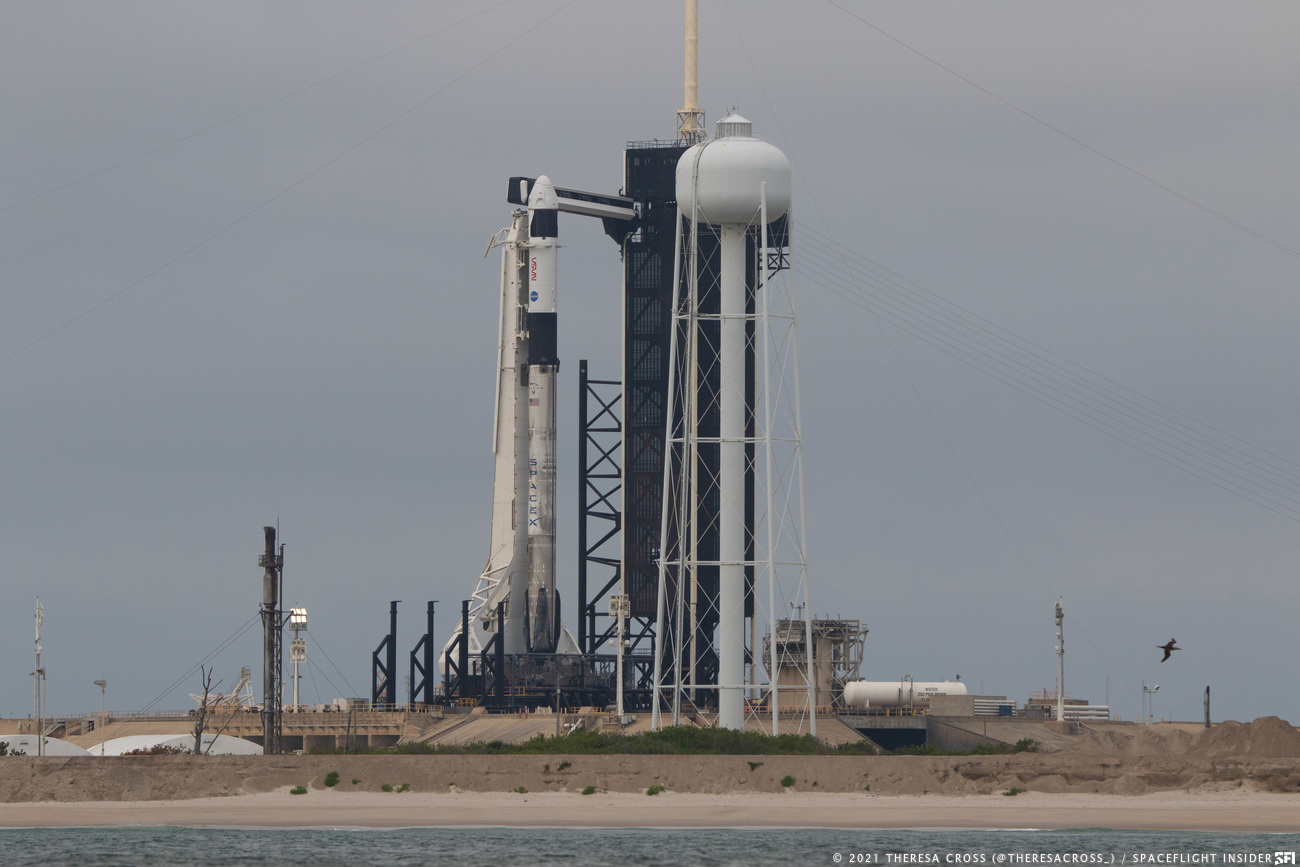 The Falcon 9 with the Crew-2 Dragon, Endeavour, on Launch Complex 39A. Credit: Theresa Cross / Spaceflight Insider

KENNEDY SPACE CENTER, Fla. — In just a couple days, the second operational Crew Dragon mission, Crew-2, is set to fly atop a Falcon 9 rocket from historic Launch Complex 39A for a six-month stay aboard the International Space Station.

Crew-2 will use the same spacecraft that carried NASA astronauts Bob Behnken and Doug Hurley for the Demo-2 crew test in in May 2020: Endeavour. This time the vehicle will carry NASA astronauts Shane Kimbrough and Megan McArthur and Japan Aerospace Exploration Agency astronaut Akihiko Hoshide and European Space Agency astronaut Thomas Pesquet to the International Space Station for a six-month flight.

During a NASA press conference, the four Crew-2 veteran astronauts all agree that “working with SpaceX and their dynamic, living and working together as they train” has been one of their favorite parts of their preparedness for the launch of Crew Dragon, currently slated for 6:11 a.m. EDT (10:11 UTC) April 22, 2021.

Seeing the SpaceX Falcon 9 spacecraft going vertical was another special moment for the astronauts as the crew approached the launch pad on April 16, not long after they arrived at Kennedy Space Center in advance of their mission. Collectively the crew expressed their anticipation for “feeling the pounding in their chest and feelings those G’s” in a live NASA teleconference on April 17.

The SpaceX Falcon 9 rocket has been going through a series of pre-flight checks and a static fire test was completed early morning on Saturday April 17. A static fire test is where rocket engines are briefly ignited while the vehicle is anchored to the ground. 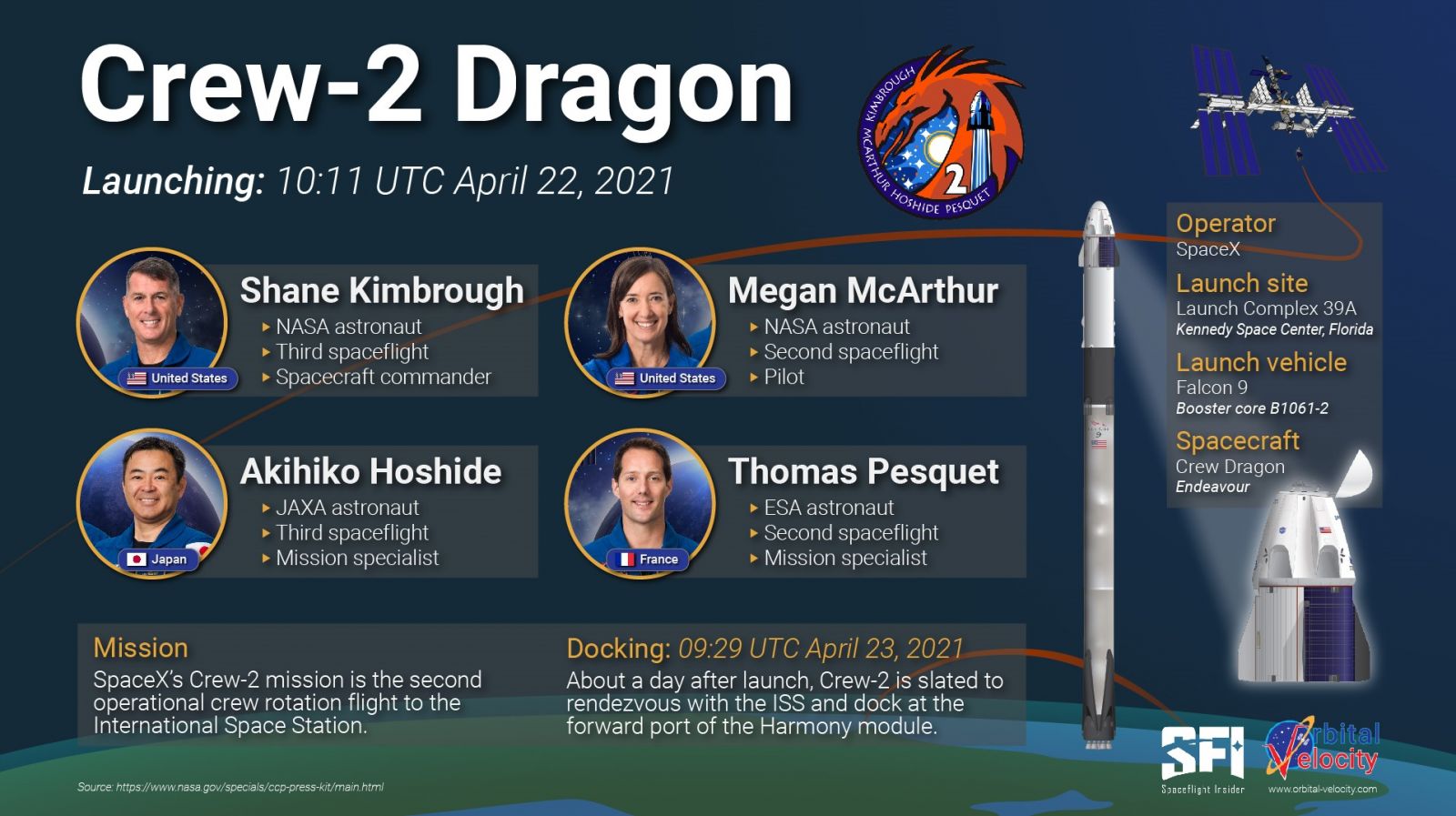 “We’re ‘go’ for launch,” said Steve Stich, manager of the Commercial Crew Program at Kennedy Space Center, in a NASA blog post. “Both Thursday and Friday launch weather looks good, with concern of winds around the pad for Thursday. Downrange weather is trickier as the front and the winds combine to create winds and waves. Friday looks better than Thursday, but we’ll continue to watch; we have another briefing tomorrow and will decide when the right time to make a decision is.”

Right now the 45th Weather Squadron is predicting an 80% chance of favorable weather conditions for the April 22 launch attempt, with the primary concern being winds at liftoff.

A backup launch date of April 23 is available, should the launch get delayed. After that, opportunities move to April 26 or April 27, according to Stitch.

Of note, this is the first mission approved by NASA to use SpaceX’s previously-flown hardware for a human spaceflight mission. The Falcon 9 first stage, core B1061-2, was first used for the Crew-1 mission in November 2020. 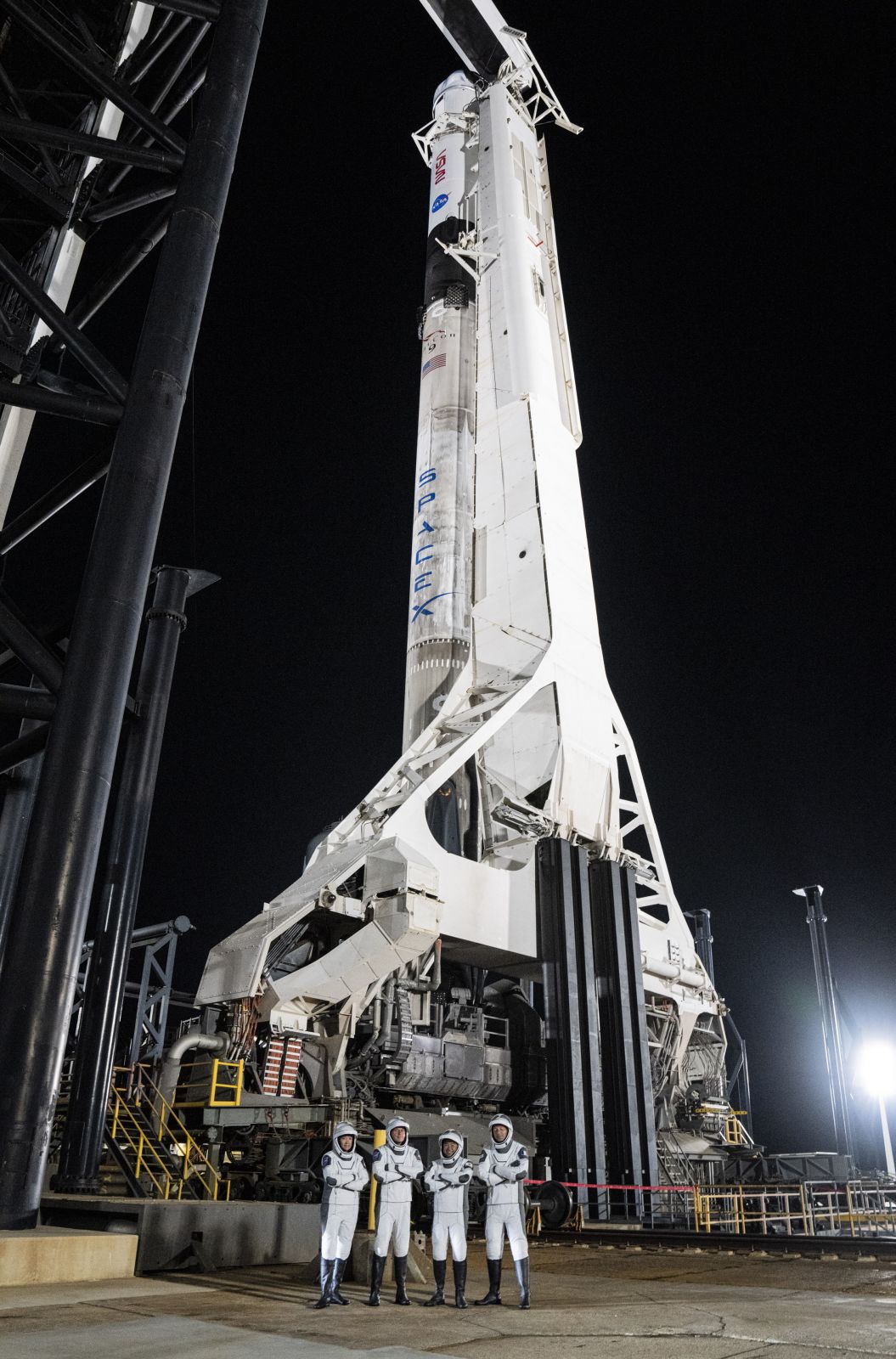 The Crew-2 astronauts pose for a picture beneath their rocket. Credit: NASA/SpaceX

Once in orbit, Crew-2 Dragon is slated to take about a day to reach the ISS, docking with the forward port of the Harmony module at about 5:30 a.m. EDT (9:30 UTC) April 23. They are replacing the Crew-1 astronauts — NASA’s Mike Hopkins, Victor Glover, and Shannon walker and JAXA’s Soichi Noguchi — who have been aboard the ISS since November 2020 when they launched in Crew Dragon Resilience.

Some of the science experiments to be performed by this crew at the International Space Station include tissue engineering in microgravity. The experimental research of 3D tissues in space will help to focus on the use of stem cells and specialized cells, which can be used for drug testing and for radiation experiments on earth.

Also, in-space production of Retinol implants is another item of research. Additionally, lung tissue, a 3D bio-printer and tissue chip investigations, which could be used as disease models, are a few more of the investigations expected to be performed on the space laboratory in the coming months.

The Crew-2 astronauts are expected to return to Earth sometime in October, likely following the arrival of the Crew-3 Dragon mission.