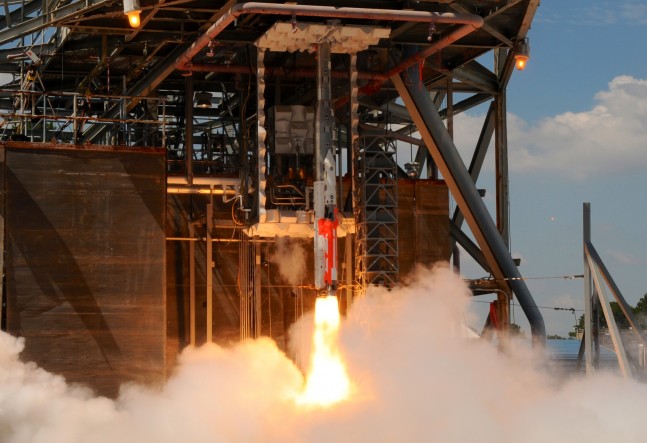 HUNTSVILLE, Ala. – NASA’s Marshall Space Flight Center (MSFC) has been assigned to manage the development of the agency’s new heavy-lift vehicle, the Space Launch System (SLS). A portion of this assignment requires MSFC to design and test a “sound suppression” system to mitigate acoustic damage to the vehicle, the launch facility, and the crew during launch. This past Thursday, August 28, SpaceFlight Insider was on hand at MSFC for the 34th (of a planned 38) test of the planned suppression system.

The test took place on a five percent sub-scale SLS model in the historic East Test Area (Test Stand 116) – the same area in which testing of the Saturn V and the shuttle took place. Preliminary indications are that the test was a success. However, the data gathered will be evaluated in more detail in the coming days.

Earlier this year, Doug Counter, technical lead for the acoustic testing, explained that “[we] can verify the launch environments the SLS vehicle was designed around and determine the effectiveness of the sound suppression systems . . . . Scale model testing on the space shuttle was very comparable to what actually happened to the vehicle at liftoff. That’s why we do the scale test.”

The launch of the SLS is expected to generate sound levels “from approximately 120 decibels, on the low end, to 180 decibels, on the high end” said Jeremy Kenny, acoustics engineer (and Propulsion Acoustics and Stability Team Lead). “These levels of sound can cause instantaneous and permanent hearing loss, in addition to rattling structural components.”

The SLS suppression system, as during the Shuttle Program, will use a flow of water during launch to create a physical barrier to prevent the sound emitted by the vehicle from reflecting off the launch structure and damaging the vehicle, the structure and the crew.

Kenny explained that testing takes place with the model located at varying heights above the platform because sound levels, and the resulting effect on the vehicle, the launch structure and the crew change with vehicle elevation.

The 7.5 feet (150 simulated feet) testing height is expected to be the highest level at which the model is tested, because, above that height, the sound levels begin to dissipate. The modeled suppression system appeared to work as planned and distributed deionized water into the “trench,” below the launch platform, and onto the platform deck, via “rain-birds,” at a flow rate of approximately 3,000 gallons per minute.

Kenny stated that NASA “learned from Shuttle that you need two types of water injection systems [for sound suppression] – one being the water injected into the trench for suppression of noise generated while the vehicle is being held down, and first starting to lift out, and second, the “rain-birds” for suppression after the vehicle has lifted out.” Both of those systems are being implemented for the SLS.

According to Nick Case, MSFC test engineer, there were “nearly 350 measurements” taken during the August 28 test. This number includes approximately 200 microphones located on and around the model to record sound levels.

The first launch of the SLS is scheduled to take place no later than November 2018, from NASA’s Kennedy Space Center in Florida. Stay tuned to SpaceFlight Insider for continuing coverage of SLS development.