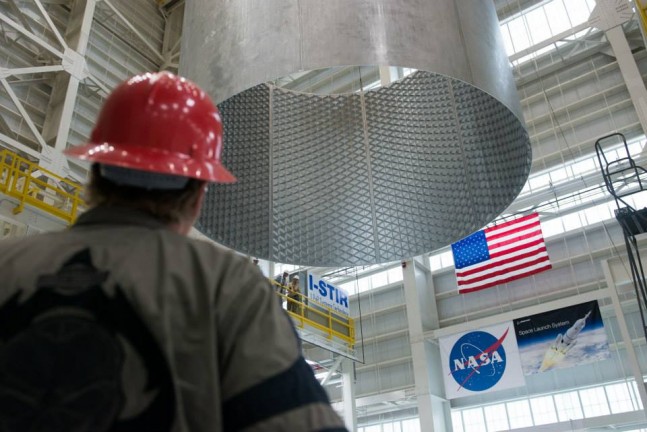 Earlier this week on June 30 and July 1, NASA’s Space Launch System (SLS) reached another milestone toward one day conducting missions beyond the orbit of Earth. SLS successfully passed what is known as the Critical Design Review (CDR) for its core stage. The review, held at NASA’s Marshall Space Flight Center in Huntsville, Alabama, ended with a finalization of a contract between representatives from NASA and The Boeing Company on June 2, marking the last major review before SLS’ full production could begin.

“The SLS program team completed the core stage critical design review ahead of schedule and continues to make excellent progress towards delivering the rocket to the launch pad,” said SLS Program Manager Todd May. “Our entire prime contractor and government team has been working full-steam on this program since its inception.” The rocket’s cryogenic stages, which will hold liquefied hydrogen and oxygen, were closely examined during the CDR, with over 3,000 core stage artifacts reviewed by 11 individual technical discipline teams, managed by Marshall Space Flight Center.

Boeing, who is the prime contractor for the core stage, joins other aerospace industry giants ATK, Aerojet Rocketdyne, and Teledyne Brown Engineering on this massive undertaking that will be the U.S.’ newest and most powerful rocket. The hope is that in the future, the Space Launch System will carry out manned missions to various points within the solar system and reignite U.S. crewed space exploration efforts.

Boeing recently finalized a contract with NASA to develop SLS’s core stage. With Boeing rapidly completing elements of the heavy-lift booster and preparing them for use on the rocket’s first mission into the black – currently slated to take place in about three years time. Boeing released the following information about this agreement. The $2.8 billion contract validates Boeing’s earlier selection as the prime contractor on the SLS core stage, including the avionics, under an undefinitized contract authorization. In addition, Boeing has been tasked to study the SLS Exploration Upper Stage, which will further expand mission range and payload capabilities.

As noted production of the booster is moving forward, manufacturing is already underway with components of the core stage test vehicle as well as actual flight hardware at NASA’s Michoud Assembly Facility. Computers and the necessary hardware are being developed and integrated at the Marshall Space Flight Center. The Critical Design Review not only gave SLS the green light to proceed with full on production, but it also marked NASA’s first CDR on a manned, deep-space launch vehicle since 1961 with the introduction of the Saturn V rocket. Boeing was also one of the participants during the review that year and the hope is that SLS will continue to build on the legacy of the Saturn V that took our astronauts to the moon.

Much like the Saturn V and the Apollo spacecraft of the 1960s and 1970s, the SLS vehicle and NASA’s Orion spacecraft will usher in a new era of manned space exploration. Unlike the Apollo missions of the past however, SLS plans to carry astronauts to destinations beyond the moon to Mars and even across other parts of our solar system.

“Our teams have dedicated themselves to ensuring that the SLS – the largest ever — will be built safely, affordably and on time,” said Virginia Barnes, Boeing SLS vice president and program manager. “We are passionate about NASA’s mission to explore deep space. It’s a very personal mission, as well as a national mandate.”

A recent NASA release stated that: SLS is currently scheduled for its initial test flight in 2017, which will provide a 77-ton lift capacity, aiming towards an eventual lift capability of over 143 tons. The Space Launch System is being designed with versatility in mind, so that it can be adjusted for a number of different scenarios and mission needs.

Please check back with SpaceFlight Insider for updates regarding the Space Launch System’s development.

Is the Boeing contract for just one flight unit? It is stated that it is the prime contractor for the first stage. Does this mean it is the total cost and it will pay all subcontractors for the 1st stage components? Or will subcontract costs be in addition to this? Does this include solid boosters, ATK also or is ATK going to be paid separately? I guess what I’m getting at is what is the cost of the first entire SLS rocket going to be. I’m not even worried about what the engineering costs are to date, I just want to know what the cost of 1 complete rocket is going to be. I think as a taxpayer I’m entitled to at least that.

Doug; Did you ever get a honest, accurate answer on this? (walterj@oppcatv.com)

Walt,
We offered to bring his questions to Boeing & ATK – directly. Is that honest & accurate enough?
Sincerely, Jason Rhian – Editor, The SpaceFlight Group

Jason, Possibly. Kind of depends on what answer Boeing & ATK come up with. Walt

This is FANTASTIC news! Passing the Critical Design Review is indeed a major milestone, and a substantial hurdle to overcome for the “cancel Orion/SLS, defund NASA, and give the money to the ‘private sector’ (especially my favorite company) crowd. We taxpayers are unequivocally getting great value for our 0.48 of one penny of every federal budget dollar that NASA receives, and this SLS is OURS, mine, the citizens of America, not the property of some “private sector” company that we hope will play nice with us and give us a fair deal on transport to the ISS.

It’s great to see that so many individuals agree with Sen, Shelby (R. Al.) who supports legislation that requires entities that receive taxpayer dollars to account for those dollars. It is not a “cumbersome burden”, as taxpayers we are entitled to at least that.