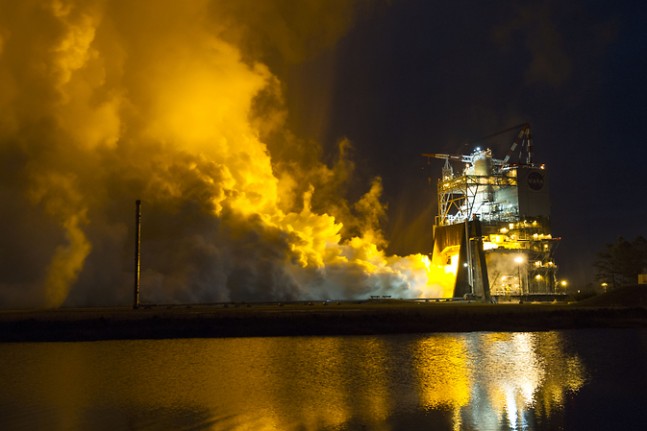 BAY ST. Louis, MS — 2015 is off to a hot start for NASA’s Space Launch System (SLS). The RS-25, the powerful engine that will propel America’s next heavy-lift rocket into deep space completed its first test of the new year in a blaze of glory. On Jan. 9, at the agency’s Stennis Space Center, engineers conducted a test fire of the RS-25 engine. Attached to the A-1 test stand, the RS-25 fired for 500 seconds, allowing crews to collect critical data needed to analyze the engine’s controller unit and inlet pressure. Four RS-25 engines will power the mighty SLS on future missions to an asteroid and even Mars.

“This first hot-fire test of the RS-25 engine represents a significant effort on behalf of Stennis Space Center’s A-1 test team,” said Ronald Rigney, RS-25 project manager at Stennis. “Our technicians and engineers have been working diligently to design, modify and activate an extremely complex and capable facility in support of RS-25 engine testing.” Any space aficionado may recognize the RS-25 engine as the one responsible for powering the space shuttle.  Recently, the “brain” of the RS-25 underwent an upgrade. The “brain”, otherwise known as the engine controller unit, enables communication between the vehicle and the engine, relaying commands to the engine and transmitting data back to the vehicle. Also providing closed-loop management of the engine by regulating the thrust and fuel mixture ratio while monitoring the engine’s health and status, the updated controller will use updated hardware and software configured to operate with the new SLS avionics architecture.

“We’ve made modifications to the RS-25 to meet SLS specifications and will analyze and test a variety of conditions during the hot fire series,” said Steve Wofford, manager of the SLS Liquid Engines Office at NASA’s Marshall Space Flight Center in Huntsville, Alabama, where the SLS Program is managed. “The engines for SLS will encounter colder liquid oxygen temperatures than shuttle; greater inlet pressure due to the taller core stage liquid oxygen tank and higher vehicle acceleration; and more nozzle heating due to the four-engine configuration and their position in-plane with the SLS booster exhaust nozzles.”

More upgrades will have to be completed prior to further testing in April of this year.  Systems to be upgraded include the high pressure industrial water system, which provides cool water for the test facility during a hot fire test. A total of eight tests are on the books, totaling 3,500 seconds, for the current development engine. Later on, another development engine will undergo 10 tests, totaling 4,500 seconds. The second test series will include the first test of new flight controllers, labeled as green running. Close-up view inside the A-1 test stand during a hot fire test of the RS-25 engine. Photo Credit: NASA

The first flight test of the SLS, currently estimated for 2018, will feature a configuration for a 70-metric-ton (77-ton) lift capacity and is intended to carry an uncrewed Orion spacecraft beyond low-Earth orbit. This will be a true test of the integrated system’s performance. SLS will continue to be upgraded, in order to provide an unprecedented lift capability of 130 metric tons (143 tons) and enable missions even farther into our solar system.

NASA currently has 16 flight engines in its fleet, as well as two development engines for ground testing. Engineers have performed extensive analysis to understand how the engines will work for SLS, and will continue analyzing the integrated design with the help of detailed data collected from the hot fire testing.

“The RS-25 is the most efficient engine of its type in the world,” said Steve Wofford, manager of the SLS Liquid Engines Office at NASA’s Marshall Space Flight Center, in Huntsville, Alabama, where the SLS Program is managed. “It’s got a remarkable history of success and a great experience base that make it a great choice for NASA’s next era of exploration.” The agency has an existing contract with Aerojet Rocketdyne (Rocketdyne), prime contractor for the RS-25, and Stennis engineers are starting the process of adapting the engine to meet SLS performance expectations with this engine testing. When powering the shuttle, the RS-25 routinely operated at 491,000 pounds of thrust. On SLS, it will operate at 512,000 pounds of thrust for the first four flights. Before launch, the four engines in the SLS core stage will encounter colder liquid oxygen propellant temperatures and a colder engine compartment in the SLS core stage.

Beginning at engine and booster ignition, the engines will encounter higher propellant inlet pressure and greater exhaust nozzle heating due to differences in the SLS design. Future testing will be designed to subject the engine to the higher thrust and greater cooling conditions it will experience with SLS. Together, NASA and Rocketdyne plan to start producing new RS-25 engines for future flights, and will further adapt and modify the engine design as part of continuing efforts to make the engines more powerful and more affordable.

“We had identified significant cost and time saving ideas for the RS-25 before the shuttle program ended,” Wofford said. “We see many opportunities for process and manufacturing savings with the change to an expendable engine and the maturation of technologies, such as 3D printing and structured light scanning.”

Initially, the team will produce six new engines, and once the design and manufacturing process has been streamlined, more RS-25 engines are expected to be produced. The RS-25 is expected to be the engine that will be powering space exploration for decades to come.

That is an engine. Rock n Roll!

NASA continues to make these public announcements when they achieve another milestone on SLS. But in reality, NASA is slow walking this program. They do just enough to make it seem like they are pushing forward. Unfortunately NASA has other priorities like environmental and diversity issues. I can’t wait till the next administration comes in and fires Bolden and puts NASA back on the right path to actual space flight. GO SLS !!

“Unfortunately NASA has other priorities like environmental and diversity issues.”

I doubt those issues are affecting the SLS.

Of course they are affecting SLS, because funding that is earmarked for space flight is being diverted for these issues, even the GAO reported that.