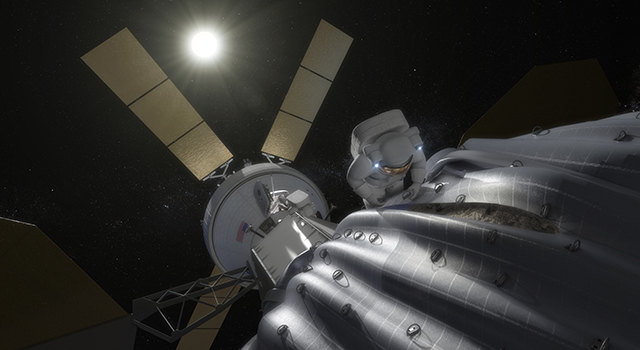 This concept image shows an astronaut preparing to take samples from the captured asteroid after it has been relocated to a stable orbit in the Earth-moon system. Hundreds of rings are affixed to the asteroid capture bag, helping the astronaut carefully navigate the surface. Image Credit: NASA

One year ago, on Feb. 15, 2013, the world was witness to the dangers presented by near-Earth Objects (NEOs) when a relatively small asteroid entered Earth’s atmosphere, exploding over Chelyabinsk, Russia, and releasing more energy than a large atomic bomb. Tracking near-Earth asteroids has been a significant endeavor for NASA and the broader astronomical community, which has discovered 10,713 known near-Earth objects to date. NASA is now pursuing new partnerships and collaborations in an Asteroid Grand Challenge to accelerate NASA’s existing planetary defense work, which will help find all asteroid threats to human population and know what to do about them. In parallel, NASA is developing an Asteroid Redirect Mission (ARM) — a first-ever mission to identify, capture and redirect an asteroid to a safe orbit of Earth’s moon for future exploration by astronauts in the 2020s.

ARM will use capabilities in development, including the new Orion spacecraft and Space Launch System (SLS) rocket, and high-power Solar Electric Propulsion. All are critical components of deep-space exploration and essential to meet NASA’s goal of sending humans to Mars in the 2030s. The mission represents an unprecedented technological feat, raising the bar for human exploration and discovery, while helping protect our home planet and bringing us closer to a human mission to one of these intriguing objects.

NASA is assessing two concepts to robotically capture and redirect an asteroid mass into a stable orbit around the moon. In the first proposed concept, NASA would capture and redirect an entire very small asteroid. In the alternative concept, NASA would retrieve a large, boulder-like mass from a larger asteroid and return it to this same lunar orbit. In both cases, astronauts aboard an Orion spacecraft would then study the redirected asteroid mass in the vicinity of the moon and bring back samples.

Very few known near-Earth objects are ARM candidates. Most known asteroids are too big to be fully captured and have orbits unsuitable for a spacecraft to redirect them into orbit around the moon. Some are so distant when discovered that their size and makeup are difficult for even our most powerful telescopes to discern. Still others could be potential targets, but go from newly discovered to out of range of our telescopes so quickly there is not enough time to observe them adequately.

For the small asteroids that do closely approach Earth, NASA’s Near-Earth Object Program has developed a rapid response system whose chief goal is to mobilize NEO-observing assets when an asteroid first appears that could qualify as a potential candidate for the ARM mission.

“There are other elements involved, but if size were the only factor, we’d be looking for an asteroid smaller than about 40 feet (12 meters) across,” said Paul Chodas, a senior scientist in the Near-Earth Object Program Office at NASA’s Jet Propulsion Laboratory, Pasadena, Calif. “There are hundreds of millions of objects out there in this size range, but they are small and don’t reflect a lot of sunlight, so they can be hard to spot. The best time to discover them is when they are brightest, when they are close to Earth.”

Asteroids are discovered by small, dedicated teams of astronomers using optical telescopes that repeatedly scan the sky looking for star-like objects, which change location in the sky slightly over the course of an hour or so. Asteroid surveys detect hundreds of such moving objects in a single night, but only a fraction of these will turn out to be new discoveries. The coordinates of detected moving objects are passed along to the Minor Planet Center in Cambridge, Mass., which either identifies each as a previously known object or assigns it a new designation. The observations are collated and then electronically published, along with an estimate of the object’s orbit and intrinsic brightness. Automatic systems at NASA’s Near-Earth Object Program Office at JPL take the Minor Planet Center data, compute refined orbit and brightness estimates, and update its online small-body database. A new screening process for the asteroid redirect mission has been set up which regularly checks the small-body database, looking for potential new candidates for the ARM mission.

“If an asteroid looks as if it could meet the criteria of size and orbit, our automated system sends us an email with the subject “‘New ARM Candidate,'” said Chodas. “When that happens, and it has happened several dozen times since we implemented the system in March of 2013, I know we’ll have a busy day.”

Remember, things have to happen quickly because these small NEOs are only visible to even the most powerful of telescopes for a short period of a few days during their flyby of Earth. After receiving such an email, Chodas contacts the scientists coordinating radar observations at NASA’s Deep Space Network station at Goldstone, Calif., and the Arecibo Observatory in Puerto Rico, to check on their availability. These are massive radar telescopes (the width of the Goldstone dish is 230 feet, or 70 meters, and the Arecibo dish is a whopping 1,000 feet, or 305 meters, wide). They have the capability of bouncing powerful microwaves off nearby asteroids, providing size and rotation information, and at times, even generating detailed images of an asteroid’s surface. If these radar telescopes can see an asteroid and track it, definitive data on its orbit and size will quickly follow.

Chodas may also contact selected optical observatories run by professionals or sophisticated amateurs, who may be able to quickly turn their telescopes to observe the small space rock.

“The optical telescopes play an important role, as their observations can be used to improve our prediction of the orbital path, as well as provide data that helps us establish the rotation rate of an asteroid,” said Chodas.

Chodas also reaches out to the NASA-funded Infrared Telescope Facility (IRTF) in Mauna Kea, Hawaii. If the IRTF can detect the space rock, it can provide a wealth of detailed data on spectral type, reflectivity and expected composition.

“After one of these alerts, there is a lot of calling and emailing going on in the beginning,” said Chodas. “Then, we just simply have to wait to see what this worldwide network of assets can do to characterize the physical attributes of the potential ARM target.”

Scientists estimate that several dozen asteroids in the 20-to-40-foot (6-to-12-meter) size range fly by Earth at a distance even closer than the moon every year. But only a fraction of these are actually detected, and even fewer are in orbits that are good candidates for ARM. Roughly half will pass Earth on the daytime side and are impossible to find in the bright glare of sunlight. Even so, current asteroid surveys are finding tens of asteroids in this size range every year, and new technology is coming online to make detection of these objects even more likely.

“The NASA-funded Catalina Sky Survey, which has made the majority of NEO discoveries since its inception in 2004, is getting an upgrade,” said Lindley Johnson, program executive for the Near-Earth Objects Program at NASA Headquarters in Washington. “We also will have new telescopes with an upgraded detection capability, like PanSTARRS 2 and ATLAS, coming online soon, and the Defense Advanced Research Projects Agency‘s new Space Surveillance Telescope will give us a hand as well.”

As part of its effort to find asteroids hazardous to Earth and destinations for future robotic and human exploration, NASA’s NEO program will continue to search for even better potential targets for ARM. Also, NASA’s WISE spacecraft has been reactivated and rechristened NEOWISE (link to: http://www.jpl.nasa.gov/news/news.php?release=2014-006) and could be used to characterize potential ARM targets.

In an attempt to leave no space-stone unturned, the agency is also combining public-private partnerships, crowdsourcing and incentive prizes to enhance existing efforts. Through its Asteroid Grand Challenge, NASA is reaching out to any and all who may have the next pioneering idea in asteroid research.

Of course, all this looking up and out and into the dim recesses of the solar system requires funding. NASA is already spending $20 million per year in the search for potentially hazardous asteroids through the Near Earth Object Observation Program. NASA’s FY 14 budget included $105 million to plan for the capture and redirection of an asteroid, increase innovative partnerships and approaches to help us amplify efforts to identify and track and characterize asteroids, and conduct studies for mitigating potential threats.

We are learning a lot more about space rocks than we ever had before and along with that the rate of discoveries will continue to climb. And of those, only a portion of the new asteroids discovered is destined to have the right stuff for an asteroid retrieval mission — the right size and the right orbit to satisfy mission requirements for the asteroid redirect mission.

The Near-Earth Object Program Office reports that, with current asteroid surveys already in place, about two potential candidates suitable for the asteroid redirect mission are discovered every year. The rate of discovery is projected to at least double as new imaging assets come online.

Does Chodas think there is a perfect target asteroid out there for an asteroid redirect mission?

“Absolutely. There are a lot of asteroids out there, and there are a lot of dedicated people down here, looking for them,” said Chodas. “You put the two together and it’s only a matter of time before we find some space rocks that fit our needs.”
NASA’s Near-Earth Object Program at NASA Headquarters, Washington, manages and funds the search, study and monitoring of asteroids and comets whose orbits periodically bring them close to Earth. JPL manages the Near-Earth Object Program Office for NASA’s Science Mission Directorate in Washington. JPL is a division of the California Institute of Technology in Pasadena.

This article was written by D.C. Agle for NASA and can be viewed here: Asteroid