NASA has released never-before-seen video from Mars — the highly-anticipated views of the Perseverance rover from multiple entry, descent and landing cameras.

The Perseverance rover touched down successfully on the surface of the red planet at 3:55 p.m. EST (20:55 UTC) Feb. 18, 2021, to begin a multi-year search for evidence of ancient microbial life. It utilized the “sky crane” landing system that was used by the Curiosity rover more than eight years ago. This time around, however, engineers included several cameras to record this unique landing system.

“This video of Perseverance’s descent is the closest you can get to landing on Mars without putting on a pressure suit,” Thomas Zurbuchen, NASA associate administrator for science, during a press conference showcasing the video. “It should become mandatory viewing for young women and men who not only want to explore other worlds and build the spacecraft that will take them there, but also want to be part of the diverse teams achieving all the audacious goals in our future.” 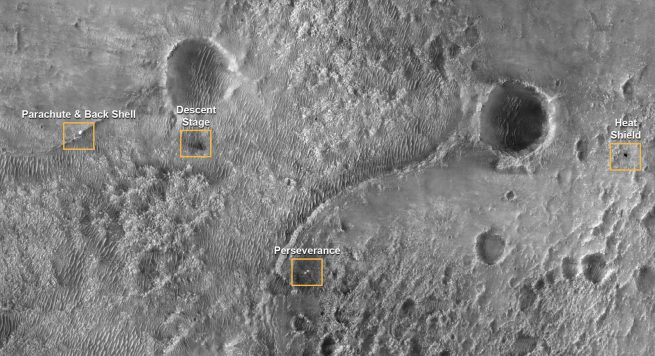 Following landing, the Mars Reconnaissance Orbiter imaged the Perseverance landing site to show the back shell, the crashed descent stage (which was planned), the rover as well as the heat shield. Click to enlarge image. Credit: NASA

“For those who wonder how you land on Mars — or why it is so difficult — or how cool it would be to do so — you need look no further,” said acting NASA Administrator Steve Jurczyk. “Perseverance is just getting started, and already has provided some of the most iconic visuals in space exploration history. It reinforces the remarkable level of engineering and precision that is required to build and fly a vehicle to the Red Planet.”

Also aboard the vehicle are several microphones, however, the one that engineers hoped would record the sound of the descent did not return usable data. However, the microphone on one of the commercial, off-the-shelf cameras did record a breeze from the surface — the first first audio recording of sounds from Mars.

Perseverance landed inside a crater named Jezero, which scientists believe played host to a lake billions of years ago. Several kilometers to the northwest of the rover is an ancient river delta.

Over the coming years, the rover is expected to make its way toward the delta studying rocks and the environment with a suite of instruments aboard the spacecraft.

The rover is also designed to collect samples and cache them in tubes that engineers and scientists hope will be collected via a series of future robotic spacecraft that’ll launch them back to Earth for further study.