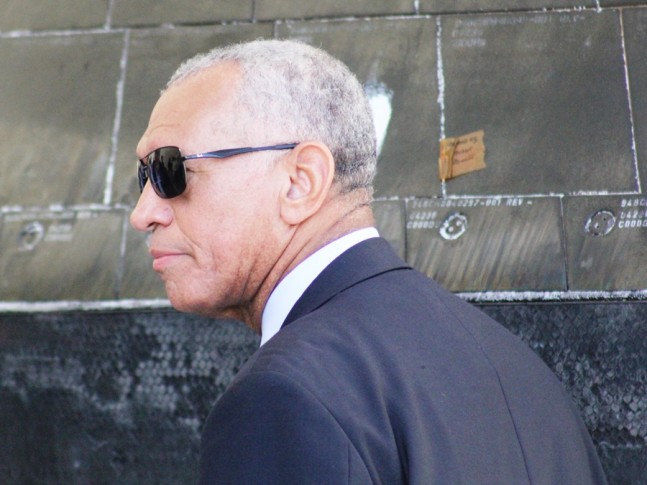 KENNEDY SPACE CENTER, Fla — NASA held an impromptu photo opportunity with the Orion spacecraft that carried out the Exploration Flight Test 1 (EFT-1 ) mission, which was flown on Dec. 5, 2014. During the Jan. 6 event NASA Administrator Charles Bolden expressed the ongoing support that the agency has for commercial space flight efforts – as well as the personality the former Marine Corps General – has become known for. Perhaps more importantly, the administrator hinted that commercial companies might have a role to play in the agency’s deep space exploration efforts.

The Orion spacecraft was unveiled with the opening of the doors at the Launch Abort System Facility located at NASA’s Kennedy Space Center. After a short wait, Paul Cooper, a manager with Lockheed Martin, the spacecraft’s manufacturer and the Kennedy Space Center Associate Director Kelvin Manning gave brief opening remarks. They were followed by Bolden who lauded the team who recovered Orion, inviting them to join him in front of the crowd. He then asked some of them to regale those in attendance with what the experience of retrieving the uncrewed spacecraft from the Pacific Ocean was like.

Bolden has become known among members of the media for being comfortable with showing emotions to the public. When asking one worker who assisted in Orion’s recovery, Bolden asked if the man had encountered an; “…oh s###” moment. On January 6, 2014 after the CRS5 scrub, NASA Administrator Charlie Bolden met Orion for the first time. Included in the photo op were engineers who worked on the Orion program as well as the recovery teams. Photo Credit: Michael Seeley / SpaceFlight Insider

During the event, Bolden also expressed optimism regarding SpaceX’s efforts to land the first stage of its Falcon 9 v1.1 booster on a barge positioned out in the Atlantic Ocean (that flight is now scheduled to take place on Jan 10 at 4:47 a.m. EST).

“We are expectantly happy about getting the first stage (to land) on a barge,” Bolden said. “Our big objective, if you want to know the bottom line, is getting launch costs down, and if reusable spacecraft accomplishes that better than one that is not? We don’t care who does it or how they do it – we just want to get launch costs down. It just costs too much to get to orbit these days.”

Bolden, a veteran of four flights to orbit himself, made sure to note that Orion and those spacecraft that currently ferry supplies to the International Space Station (as well as those that are being developed to send crew to the orbiting lab as well) are not competing with one another. Bolden had a colorful slip of the tongue when asking one of the crew who recovered Orion about his experiences. Photo Credit: Michael Seeley / SpaceFlight Insider

“There is no competition between this vehicle (Orion) or any of the commercial vehicles,” Bolden said. “This vehicle has one purpose, and that was the agreement that we made with industry, that NASA would focus on deep space exploration and we selected Orion as the vehicle to do that for us.”

Instead, Bolden noted that sending crew and cargo to low-Earth orbit – is something NASA has been doing for more than 50 years and it was time to allow commercial space entities to take responsibility in this area. The Bolden photo opportunity was held after SpaceX failed to launch one of the company’s Dragon spacecraft, packed with 5,200 lbs of supplies, to the International Space Station. Photo Credit: Jason Rhian / SpaceFlight Insider

“We do hope that Orion blazes the trail for others to follow it, just as we did with Mercury, Gemini, Apollo, Shuttle…we got really comfortable that we knew how to get to low-Earth orbit and we felt that it was time to hand that off to industry,” Bolden said. “I think when we finish the first few flights on Orion, we will feel comfortable enough to say, ‘okay guys’ help us out if you can and we want as many companies as possible to be poised to do that.”

This statement suggests that the space agency plans to further the relationships that it has forged with private partners in the past decade. NASA has developed an array of programs designed to enable aerospace firms to handle tasks that were at one time the sole purview of NASA.

Bolden retired from the U.S. Marine Corps in 2004 with the rank of Major General, he was nominated by President Barack Obama to be the NASA Administrator on May 23, 2009. Pretty disgusting when Holden uses Orion to advertise for SpaceX. The SLS and Commercial crew are total opposites and in competition for resources. There is a vicious ideological battle going on between New Space and SLS supporters and everyone interested in space exploration knows this. With two-faced double agents playing these kinds of games it is no wonder NASA is in such trouble.

Sorry, Bolden not Holden. I tend to get our worthless science adviser and him confused. I can’t stand either one of them.

Double agents?? SLS vs Commercial crew? What are the development budgets of both? SLS is for BLEO. Commercial Crew – LEO – different jobs and different requirements. New and Old Space may have a hand in BLEO in the future. Who would have thought 5 years ago – that the US may end up getting a new reusable first stage? via SpaceX? Things are changing.

Things went from bad to worse when New Space got their foot in the door (by way of political contributions). Reusability is a myth. The only way to get close is with SRB’s that are just steel tubes; even that does not break even. It does allow exquisite inspections though and the result was over 200 flawless firings in a row. Inspecting a steel cylinder and refurbishing a coked up kerosene turbopump are two very different things. It makes no sense. It appears to be just a way to suck up more tax dollars for the several years it will take to prove it is not worth the trouble. Since Musk is years behind schedule in actually transporting a human being and has years to go, maybe the money he is blowing on this gimmick should be seen for what it is.