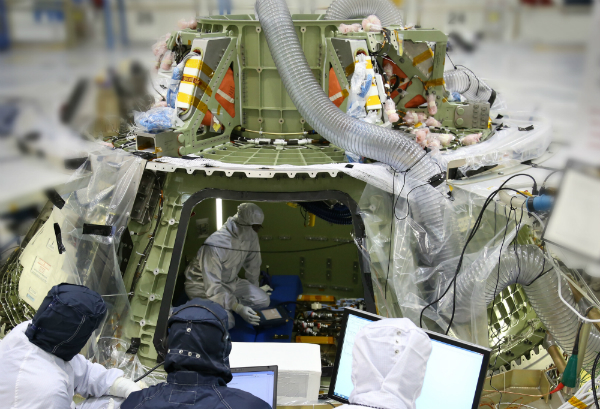 NASA"s Orion spacecraft, the test article which will fly the Exploration Flight Test 1 next year, had its avionics installed and tested last week at Kennedy Space Center in Florida. Photo Credit: NASA

KENNEDY SPACE CENTER, Fla –NASA’s next planned crewed spacecraft, the Orion Multi-Purpose Crew Vehicle or “Orion MPCV” has turned a pivotal corner toward ferrying crews to possible destinations beyond low-Earth-orbit.  The spacecraft which will conduct the Exploration Flight Test 1 (EFT-1) had its avionics systems installed, powered up and ran through a battery of tests last week.

This Orion will be used on EFT-1 and continues to meet milestones which keep it on course for a planned launch in the fall of 2014 from Cape Canaveral Air Force Station’s Space Launch Complex 37 in Florida.

Over the course of the past year, some 60,000 components destined for Orion have traveled from various destinations to Kennedy Space Center. The crew module (which will be unmanned for EFT-1) has already undergone testing which, during pressure tests showed flaws that have since been corrected. These tests have served to validate that Orion’s design is ready for the rigors of space travel. Utah-based ATK has delivered the Launch Abort System (LAS) which will be attached to the top of Orion. However, the system is mostly inert with only the rockets needed to pull the structure away from Orion being functional.

Starting next year, the pace of preparing Orion for flight will accelerate. The command module will be integrated with both the LAS as well as the service module.

This is just part of a far larger dance of material, personnel and machines which will culminate in a powerful United Launch Alliance Delta IV Heavy rocket thundering to orbit with the Orion MPCV perched atop.

After riding on the shoulders of the massive Delta IV rocket, Orion will conduct a four-hour mission that will conduct two orbits and travel some 3,600 miles above our home world (by comparison, the International Space Station orbits at about 260 miles above Earth). Traveling this far a=out will allow NASA engineers to test out the craft’s avionics and more-importantly – Orion’s heat shield. During its return Orion will be traveling approximately 20,000 miles per hour – causing the heat shield to reach temperatures of 4,000 degrees. This data will serve a variety of purposes – from confirming initial performance estimates to pointing out miscalculations. The EFT-1 mission will see Orion conduct two orbits before returning to Earth at some 20,000 miles per hour. Image Credit: NASA

These range from components lacking strength to being “over-built.” Engineers will use the information gleaned from EFT-1 to shore up deficiencies and to cut back on elements that have been excessively designed.

“Orion will take humans farther than we’ve ever been before, and in just about a year we’re going to send the Orion test vehicle into space,” said Dan Dumbacher, NASA’s deputy associate administrator for exploration systems development in a release issued by NASA. “The work we’re doing now, the momentum we’re building, is going to carry us on our first trip to an asteroid and eventually to Mars. No other vehicle currently being built can do that, but Orion will, and EFT-1 is the first step.”

NASA is ceding the delivery of crew and cargo to the International Space Station and possibly, one day, other destinations in low-Earth-orbit (LEO) to commercial firms such as Space Exploration Technologies (SpaceX), Orbital Sciences Corporation, Boeing and Sierra Nevada Corporation.

With the responsibility of handling LEO operations being handled by private companies, NASA is developing Orion MPCV and the Space Launch System heavy-lift booster to send astronauts to destinations such as asteroids, the Moon and possibly, one day, Mars. This would mark the first time in more than four decades that crews have ventured beyond LEO.

“It’s been an exciting ride so far, but we’re really getting to the good part now,” said Mark Geyer, Orion program manager. “This is where we start to see the finish line. Our team across the country has been working hard to build the hardware that goes into Orion, and now the vehicle and all our plans are coming to life.”

If all goes according to plan, EFT-1 will lead to Exploration Mission 1 – which should see an Orion spacecraft conduct a cislunar mission. This is currently planned to take place in 2017. Crew are not planned to fly on Orion until 2021 at the earliest. A mission to a captured asteroid that would be placed in lunar orbit has been floated, but lacks support in Congress. Other destinations such as to a Lagrange Point have surfaced and while Dumbacher has stated that SLS/Orion are planned for use on Mars missions given the current financial environment it is unclear if the goal of sending crews to the Red Planet is fiscally possible by the 2030 timeframe mentioned by President Obama.