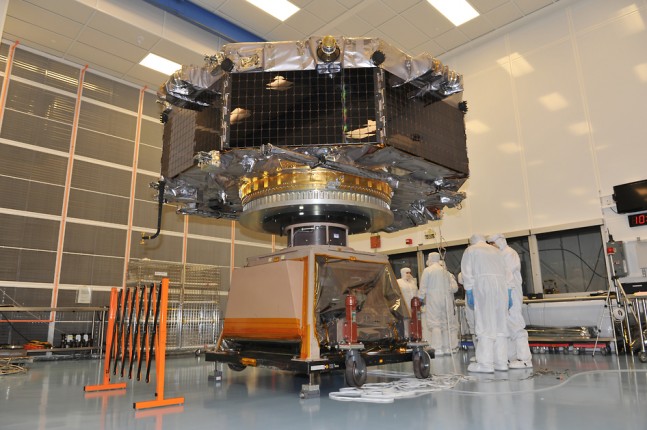 In an effort to study what is known as “space weather,” NASA’s Magnetospheric Multiscale (MMS ) is scheduled to launch no-earlier-than March of 2015 from Cape Canaveral Air Force Station’s Space Launch Complex 41 (SLC-41 ) in Florida. The MMS will fly aboard a United Launch Alliance Atlas V 421 launch vehicle and will include four separate satellites, each with “ultra high speed instruments” to study phenomena like magnetic reconnection.

Magnetic reconnection is a process that occurs between the Earth and the Sun during which the magnetic fields of the two bodies connect and disconnect, releasing huge explosions of energy and sending particles flying outward in every direction at close to the speed of light. According to NASA, it “powers eruptions on the sun and — closer to home — it triggers the flow of material and energy from interplanetary space into near-Earth space.” One of the more obvious effects of reconnection, for the average person, is the aurora borealis (also called the “northern lights”) and similar phenomena. It is also a critical part of the process that creates solar flares.

Reconnection occurs in layers that are just miles thick, which is actually relatively thin considering the sheer amount of energy that the process can push into the plasma and the Earth’s magnetosphere. A preview of the launch configuration of the four satellites of the MMS. Photo Credit: NASA

The four spacecraft were built in-house at NASA’s Goddard Space Flight Center located in Maryland, which is also known for its work on the Hubble and James Webb Space Telescopes.

The MMS satellites will be stacked one on top of another during launch, and when the payload fairing is removed, each spacecraft will be ejected, one by one, before moving into a pyramid-like configuration that can be adjusted.

Once the satellites are in orbit, the instruments will be deployed. The magnetometer boom will be first, on the underside of each spacecraft, followed by the Spin-plane Double Probe (SDP) booms, and then the Axial Double Probe (ADP) booms and antennas.

According to NASA’s website, the instruments “will measure charged particle velocities, as well as electric and magnetic fields, with unprecedented (milliseconds) time resolution and accuracy needed to capture the elusively thin and fast-moving electron diffusion region.”

The MMS instruments will be used to create, according to NASA, the “first-ever 3-dimensional maps” of the magnetic reconnection process as the orbit of the spacecraft configuration carries the four identical satellites through regions near the Earth where reconnection takes place.

Reconnection occurs throughout the universe, in all known systems of astrophysical plasma. The goal of the MMS mission is to better understand how this magnetic reconnection occurs, and also to study energetic particle acceleration and turbulence in Earth’s magnetosphere.

“By studying reconnection in this local, natural laboratory, MMS helps us understand reconnection elsewhere as well, such as in the atmosphere of the sun and other stars, in the vicinity of black holes and neutron stars, and at the boundary between our solar system’s heliosphere and interstellar space,” declares the MMS mission statement. It is currently planned to be a two-year mission.