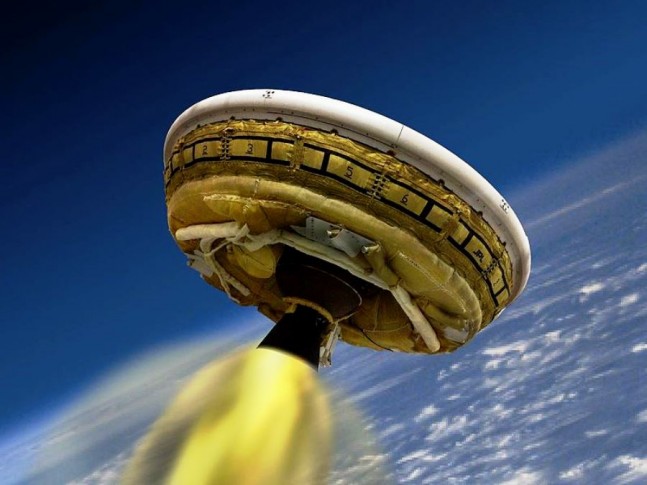 NASA is planning on carrying out the second test flight of its LDSD test article on June 2, 2015. Image Credit: NASA

NASA’s ‘UFO’ flying saucer – which has the more-official name of the Low-Density Supersonic Decelerator or “LDSD” – is being readied for its second test flight from the U.S. Navy’s Pacific Missile Range Facility (PMRF) located in Kauai, Hawaii. If everything continues to go as planned, NASA will send the odd-looking craft aloft via a balloon before being spun up – and then sent roaring aloft via an Orbital ATK Star 48 solid rocket motor. The upcoming flight will mirror one conducted in June of last year – and is currently slated to take place on June 2.

The window for the test flight opens at 7:30 a.m. HST (12:30 p.m. EST; 16:30 GMT). One of the more prevalent concerns in terms of launching anything has already been factored into mission-planners’ decision making. In an effort to counter the threat posed by weather conditions, planners pushed back the opening of the window by one hour.

With NASA currently planning on sending astronauts to Mars sometime in the 2030s, this technology is essential to landing heavy payloads on the surface of other worlds. The concept of a heat shield that can be inflated is one that has crept into the consciousness of organizations and agencies planning on conducting missions to the Red Planet. This is precisely what the LDSD is designed to test.

LDSD is meant to validate concepts on both crewed and uncrewed missions to Mars. It also could be used to return heavy payloads back to Earth. With the vast majority of resources located off Earth, it is possible that technologies tested by the LDSD could be used to enable emerging organizations looking to tap the limitless resources found in the outer solar system. Conducted over the Pacific Ocean, LDSD will simulate supersonic entry and descent speeds that the LDSD design would encounter upon re-entry.

Once there, it, like next month’s test article, will be ‘spun up’ via four small solid rocket boosters which is done to increase stability.

NASA has plans to continue testing and developing this technology alongside its other efforts meant to allow crews and other payloads to travel to and from distant points throughout the solar system.

Why is everyone working themselves into a tizz about Mars? We haven’t even established a base on the Moon yet. I’m assuming we are talking about sending exploratory spacecraft to Mars with the distant vision of establishing a human presence on Mars AFTER we establish a Moon-base?

My analogy – centuries ago the Europeans were expanding their trade and military empires’ by sailing further and further away from home. The process was to establish a ‘foothold’ port/base, then strengthen that, and then set off from there to go further out and establish another port/base and so on. That’s how the British could establish and run Australia (for example) from the other side of the world; they had a chain sequence of replenishment and communication port/bases to set off from – one logical, sensible step at a time.

So let’s get a Moon-base happening first, much like the International Space Station (ISS) now; conduct experiments; develop research; observe Mars and the rest of the cosmos from the Moon; launch exploratory spacecraft to Mars from the Moon’s surface; build the Moon-base up with its own community of scientists and space engineers, much like the Antarctic bases and International Space Station (ISS).

But isn’t there water on Mars? I don’t really think that ‘water on Mars’ is a valid excuse to go to Mars first before taking the natural step of establishing a Moon-base. I mean, according to NASA, we’ve transported astronauts there 6 times before, over 40 years ago – so it’s a no-brainer. It takes almost a year to get to Mars, whereas (according to NASA) it only 3 days to get to the Moon. Mars has a lot of flood and river channels suggesting that a long time ago liquid water flowed on Mars during a time when Mars was a warm and wet planet with a thicker atmosphere. There is recent evidence that there may also be liquid water at or near the surface on Mars in some places, but this has yet to be proven.

Water on the Moon? The Moon, in fact, has water in all sorts of places; not just locked up in minerals, but scattered throughout the broken-up surface, and, potentially, in blocks or sheets of ice at depth.” The results from the Chandrayaan mission are also “offering a wide array of watery signals.”

There is one thing that space-enthusiasts don’t talk about which is a major ‘barrier’ to manned space flight – in a word RADIATION. Astronauts, scientists and space engineers would never survive the radiation exposure from earth’s Van Allen radiation belts and then, once they are past that, the intense radiation from the sun – the radiation levels are way too high and they can penetrate every know substance known to humans.

Radiation from space takes the form of subatomic particles from the sun. These high-speed particles tear through DNA molecules, splitting them or damaging the instructions they have encoded for cell reproduction. The damaged DNA can lead to cancers or other diseases. Radiation exposure would be extreme and chronic microwaving current space travellers and pioneers.

So logically, all the money NASA and the rest of the space / scientific world intend to spend on proposed missions to the Moon or Mars, should be put into developing a system, alloy or synthetic material (similar to Demron) that can effectively shield high-Rad radiation from the Earth’s Van Allen radiation belts and subatomic particles from the sun. Once this has been achieved, then genuine, credible manned space flight will be possible, but probably not in our lifetime. We can always go to the movies…

I completely agree, Derek..the Moon is our next natural step. It is the perfect learning environment for living off-Earth, yet it is close to home. We are very fortunate to have such a large, resource-rich moon.
Personally, I’d rather live on the Moon than on Mars. There is something strangely fascinating about the landscape, and a lot of territory to explore.
Yes, lots of people are excited about Mars, and we should start learning how to build hardware to get us there, but fear not, Derek..the Moon Rush is on its way.
NASA has always continued projects (in collaboration with universities and private companies)aimed at establishing moon bases and utilizing lunar resources. Even the LDSD thingie could lead to a platform for returning lunar resources to Earth orbit. Several companies have plans to begin operations on the Moon within a decade, and when the first astronauts (probably private) start doing things up there, we will see a huge surge of interest in the new lunar frontier.

Derek and R. Stewart,
Great points all. Yes that’s the 64 trillion dollar question. Why not colonize the moon and begin mining H3 (Helium3) which would end our energy and many of our environmental issues and provide a jumping off point to the next planet. I mean it’s right THERE, the closest sphere to Earth. So, I guess the only people to ask are the surviving astronauts that did travel to the moon. Ask them why we as a nation, spurred on by JFK, RACED the Russians to the moon, dropped modular living quarters for moon residing personnel, and then got the hell out and NEVER went back. There’s a reason, or many that we left the moon. You might look into the many lunar anomalies in comparison to other “moons”, and then ask yourself “why hasn’t NASA EVER released the CLEAR, HIGH DEFINITION photos taken by every probe and orbiter we sent up?” There’s a reason gentlemen.
O.k., so now let the onslaught of arguments begin stating what a delusional loon I am.