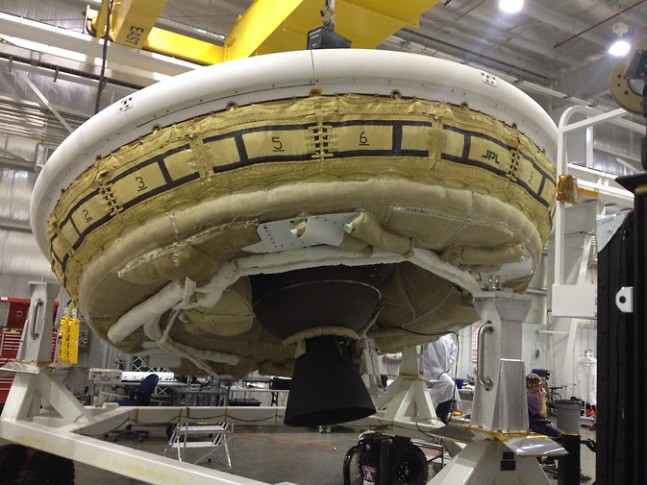 A saucer-shaped test vehicle holding equipment for landing large payloads on Mars is shown in the Missile Assembly Building at the US Navy's Pacific Missile Range Facility in Kaua‘i, Hawaii. Photo Credit: NASA/JPL-Caltech

NASA’s rocket-powered test vehicle is scheduled to take to the skies for its first near-space test from U.S. Navy’s Pacific Missile Range Facility (PMRF) located on Kauai, Hawaii within the next few days. The Low-Density Supersonic Decelerator (LDSD) project’s flying saucer appearance makes it look like it’s straight out of a Steven Spielberg film. Planned to test out reentry technologies it has a first potential launch date of June 28.

The original test had been delayed from earlier this month due to poor weather conditions, which prevented the launch from happening on schedule. Now, starting on Saturday, June 28 as the first potential launch date, LDSD will ascend by the means of a high-altitude balloon. The other dates available to the launch team are June 29, 30, July 1, and 3. For Saturday, the launch window is slated to be open from 8:15 through 9:30 a.m. Hawaii Standard Time (2:15-3:30 p.m. EDT).

Arriving at the U.S. Navy’s Pacific Missile Range Facility on April 17, the last major assemblies took place back on April 30 when the vehicle was mated to ATK’s Star-48 booster rocket. As of June, the flying saucer is now ready to fly, only waiting on good weather. The saucer-shaped test vehicle for NASA’s Low-Density Supersonic Decelerator (LDSD) will undergo a series of events in the skies above Hawaii, with the ultimate goal of testing future landing technologies for Mars missions. Image Credit: NASA/JPL-Caltech

The testing of the Low-Density Supersonic Decelerator is part of a broader goal for the future, being a vessel for which other technologies can be exercised. The plan is to utilize Supersonic Inflatable Aerodynamic Decelerator (SIAD), a balloon-like craft that is 20 feet in diameter.

The LDSD team, which is part of NASA’s Technology Demonstration Mission, hopes to: conduct full-scale, stratospheric tests of these breakthrough technologies high above Earth to prove their value for future missions to Mars. In this picture, NASA’s saucer-shaped experimental flight vehicle is prepared for a Range Compatibility Test at the US Navy’s Pacific Missile Range Facility in Kaua‘i, Hawaii. During the exercise, which occurred on April 23, 2014, all the radio frequencies interfaces between the vehicle, its balloon carrier and the missile range were checked. Photo Credit: NASA/JPL-Caltech

The closest that Mars and Earth get to one another is some 33 million miles (54.6 million kilometers), LDSD aims to provide crucial information in understanding how future astronauts might maneuver heavy payloads and spacecraft onto the Martian surface. The basic technology for the flying saucer-shaped craft dates back to 1976 with the Viking Program, which successfully placed two landers on the surface on Mars using a parachute design. This technology has been used on all of the Mars rovers with the most recent instance taking place in 2012 when the Mars Science Laboratory rover Curiosity landed on the Martian surface.

According to a NASA-issued release: NASA scientists and engineers borrowed a technique used by the ‘o’opu hue, also known as the Hawaiian pufferfish. The technique? Rapid inflation. For the pufferfish, it is simply a defense mechanism. For NASA, it is potentially the element that links to the future of space exploration.

At the size of a football stadium at over 34 million cubic feet, the scientific balloon will lift NASA’s LDSD to a desired altitude of approximately 120,000 feet where it will then be detached. At this point the solid rocket motor will provide the remainder of the boost required. In order to properly test the solid rocket-powered balloon-like vessel SIAD, supersonic speeds of Mach 4 need to be reached.

“Once at supersonic speeds, the deployment and function of the inflatable decelerators will be tested to slow the test article to a speed where it becomes safe to deploy a supersonic parachute. The balloon and test article will all be recovered from the ocean.”

Once testing is completed, the two recovery vessels Kahan and Konua will recover both SIAD and LDSD with the help of G-2 and C-26 aircraft. Wallops Flight Facility will oversee the recovery operations. Before each launch opportunity, a decision will be made 24 hours in advance to confirm or deny a launch attempt for that day. The launch may be viewed live online at UStream or on NASA Television for interested viewers.

Please check back with SpaceFlight Insider for updates regarding the LDSD launch.