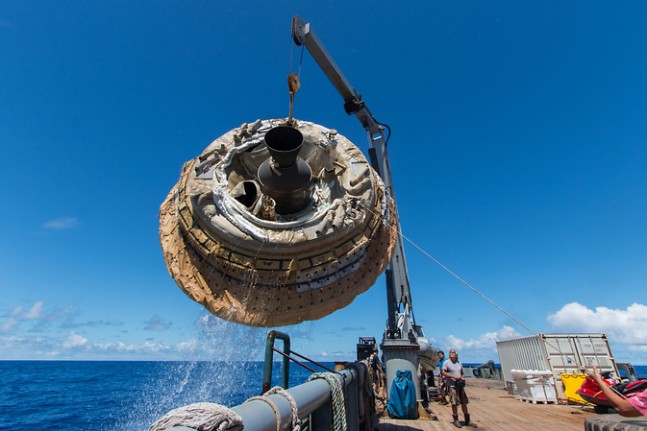 NASA's LDSD is recovered after splashing down in the Pacific Ocean off the coast of Hawaii. Photo Credit: NASA “A lot of the focus of the agency […] is developing technologies to facilitate human exploration of Mars,” said Jeff Sheehy, senior technologist with the Space Technology Mission Directorate, during the briefing. “You gotta get there, you gotta land there, you gotta live there, and you probably wanna return from there. So these technologies that [Mark Adler, project manager of the LDSD at NASA’s Jet Propulsion Laboratory (JPL)] and [Ian Clark, principal investigator of the LDSD project at JPL] have been working on are all about landing on Mars. Landing on Mars is really hard,” he said.

It is a balloon-launched vehicle, meaning that a balloon with a volume of 34 million cubic feet carried the 7,000 pound payload to an altitude of 120,000 feet at about 1,100 to 1,200 feet per minute. The balloon expands as it gets higher, and when the saucer reached target altitude, the balloon dropped the LDSD vehicle.

After that, the vehicle’s two spin motors fired, bringing it to a spin of about 50 rpm, and then the Star 48 solid rocket motor fired for about 71 seconds to accelerate the vehicle to Mach 4.3. “Then we fire the spin-down motors, the thing comes to a dead stop, and then flies very stably at Mach 4. So we’re very happy about this,” Adler said. “At this point, we’ve actually achieved most of the objectives of the flight that we had this summer.”

The main objective was to show that they could get the vehicle to the correct altitude and airspeed to properly test new technologies for future missions to Mars. It was necessary to bring the vehicle to about 180,000 feet where the atmosphere has about the same density as the Martian atmosphere, and to ensure it could fly successfully at Mach 4. Cameras on board the LDSD captures an image of the balloon that carried it into space. Photo Credit: NASA/JPL-Caltech

“We’ve been developing a number of technologies as part of this project, technologies that will enable us to land payloads significantly larger than the Curiosity rover, land on the places on Mars that we’ve never been able to get to before, and land them more accurately,” Clark said.

Two such technologies were carried on the flight and will be tested further next year on the same type of test vehicle. One, the Supersonic Inflatable Aerodynamic Decelerator (SIAD) is a large air brake wrapped around the diameter of the saucer-shaped vehicle that deployed during the flight.

The second is a supersonic ballute and the Supersonic Disk Sail Parachute it was designed to help deploy. With more than double the area of the parachute used for the Curiosity mission, this is the largest supersonic parachute ever flown. During the test flight, when the parachute deployed, it quickly began to tear apart.

“We’ve learned a lot from this video already,” Clark said. “For one, that we have more to learn about supersonic parachute inflation.”

Two more flight tests are planned for the project.

LDSD is part of NASA’s Space Technology Mission Directorate, which, according to NASA, “is innovating, developing, testing and flying hardware for use on future NASA missions. Over the next 18 months, the directorate will make significant new investments to address several high-priority challenges in achieving safe and affordable deep space exploration.”

Check out footage from the test here:

I am very glad that the “Flying Saucer” LDSD was successful. When will be the next test flight at Barking Sands US Navy Missile Site?

Pete: The only details I’ve found for the next test flights of the LDSD is this: “Supersonic flight tests will be conducted in 2014 and 2015 from the Pacific Missile Range Facility on Kaua’i, Hawai’i.” I found that in their press kit: http://www.jpl.nasa.gov/news/press_kits/ldsd.pdf

“A lot of the focus of the agency […] is developing technologies to facilitate human exploration of Mars,”

That’s great! NASA should focus to complement SpaceX and other private space companies in the areas of research and development of new revolutionairy technologies and lay the ground for fruitful commercial space exploration and advancing science and technology for earth applications. NASA, lead us the way! Great! And always ask the question how it will benefit the taxpayer.

EXCELLENT WORK NASA!! Leave the LEO space-taxi-tourist spaceflight to the “Commercial” space entities. The real space exploratio, to the moon, Mars, and beyond will always be done by NASA, Newspace fantasy notwitstanding, and like Pioneer, Voyager, Viking, Curiosity, New Horizons, etc.
Let the “commercial” entities be truly “commercial” and pay their own way, and not ask for taxpayer funds.

Hi Karol, now you almost said what I said except for that the commercial companies did not ask for taxpayer funds. Rather it was NASA’s own initiative to cooperate with commercial companies and to help them on their way. Now with the limitless ambition of SpaceX (their goal of large settlement on mars for starters) I think NASA is not the one for deep space exploration hard- and software, but rather for fundamental research on revolutionary technologies ie traveling beyond the speed of light by bending time. I think it would be the best idea that NASA and SpaceX work together intimately for now. For future I seriously question if a government organization is the best way forward in any space related endeavor except from a military standpoint.

Inasmuch as “commercial” companies have repeatedly lobbied Congress for taxpayer funds for development, it is apparent that without taxpayer dollars, the “commercial” groups would not exist. If “commercial” entities don’t need federal subsidy, they should immediately tell their lobbyists to ask Congress to eliminate funding devoted to commercial space and transfer the funds for work on planetary exploration and SLS/Orion. (Or at least they can agree with Sen. Shelby and comply with standard accounting practices to show how taxpayer dollars are spent). If taxpayer dollars had been used instead to build a taxpayer owned Ares I under a properly funded and run Constellation program, we would have American transport to the ISS by now. We have NASA, the space program of the American people, not MASA the taxpayer-funded private space property of Musk. It is not the chartered purpose of NASA to serve the will of a private entity. For decades private corporations have earned profit using the technology developed by, and licensed by, NASA. If Musk wants a researchers to support his ideas, let him buy his own in-house research staff. NASA is not there to do his bidding. If Musk wants to build his private base on Mars, let him invest some of his own billions and those of some Wall Street investment bankers. If there is profit to be made on Mars, he should have no problem getting herds of investment bankers to throw money at him in anticipation of huge return on investment. If the American people are to risk tax dollars on building a base on Mars, the American people should own it. Space exploration is not all about turning a profit, or concocting a baseless but appealing scheme to finance some billionaires Newspace fantasy of enormous profit on Mars.

Hi Karol, thanks for your lengthy reply. I think we both agree that taxpayers money should be carefully spend. That was exactly the reason why NASA considered it wise to lower spending by cooperating with commercial businesses. Help them on their way at first, but after an initial funding, stop that funding and save money. I totally agree that whatever Elon wants to pursue must be paid by himself (that is, including investors of cause). But it might also be that NASA wants to cooperate with SpaceX and such companies in the future, including investing, to the benefit of both.

Question to Karol or others:
what do you think, when commercial companies provide transportation throughout the galaxy and beyond, and are doing fundamental research themselves, should NASA’s reason of existence be then?

When you compare space travel with air travel, then you could reason that commercial companies do it all and there need not be a federal agency developing airplanes.

My first sight of this test showed the top side of the test vehicle being hoisted up from the water with yellow lifting bags, yellow ones, and the photograph was removed and I was unable to locate it that same day. All the shots thereafter were not of this view, and only of the bottom surfaces !!

I understand the “why” as it looked like the SFO’s of late, and a wet UFO, to boot if ever there was a photo of such. Another editing job by our transparent government, or not? Any answers ?? Anybody ?