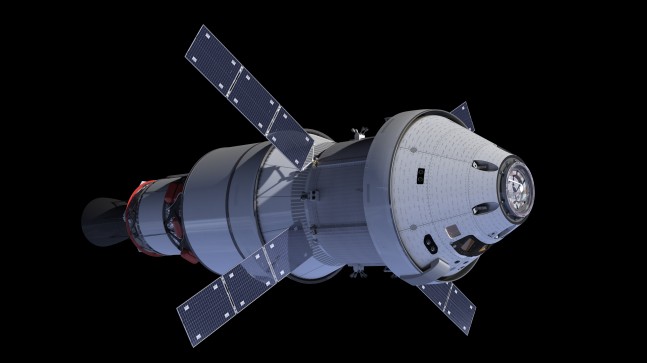 In order to test out the abort systems which will be used on the Orion Multi-Purpose Crew Vehicle, NASA will conduct an uncrewed ascent abort test flight in 2018. Getting the launch complex which will conduct the flight ready has taken on increased importance. SpaceFlight Insider at down with NASA's Don Reed to find out more about this mission. Image Credit: NASA

To get its new human-rated spacecraft, the Orion Multi-Purpose Crew Vehicle, ready to ferry astronauts to orbit and to destinations beyond, NASA has to test all aspects of the spacecraft prior to its first crewed mission. One of the lesser-known aspects of the testing process is what is known as “Ascent Abort 2.” This test is currently scheduled to be carried out at Cape Canaveral Air Force Station’s Space Launch Complex 46 (SLC-46) in Florida in 2018.

SpaceFlight Insider, noting the unique nature of this upcoming test flight – wanted to find out more about what it would entail and what stands to be gained from this mission. As such, we reached out to one of the individuals working on the effort, NASA’s Don Reed.

SpaceFlight Insider: First Don, let me thank you for chatting with us about AA2.

Reed: “Not a problem, what would you like to know?”

SpaceFlight Insider: First off, for those of us who cover Cape Canaveral, we’re used to hearing launches out of SLC 37, 40 or 41 – but not 46. Is 46 in need of renovation to allow it to serve the requirements placed on it for this mission? What has to be done to ready 46 for this test? Reed: “We’ve got Space Florida helping us in that area so that the Mobile Access Structure, which is in need of refurbishment and so Space Florida, has agreed to go ahead and do that refurbishment. As you are aware, they are also upgrading the communications row, which is located underneath SLC 46. Because of the type of motor that we’re using in the launch stand they have to do flame trench analysis which has already been completed by the Air Force’s independent contractor. They provided those results to Space Florida and then Space Florida has got to go hire a contractor to go look at the data and see whether-or-not the flame trench needs any kind of modifications.

Space Florida is also providing the launch stand and it also needs to be inspected and validated that it is still acceptable for use on our mission. They’re also in the process of licensing some facilities at Area 57 from the Air Force’s 45th Space Wing that we will use to do the final integration and processing of the launch abort test booster.

There’s three buildings that they have that they are working on a licensing agreement with the Air Force and they currently have a trade study ongoing right now to see which one of those buildings best meets the needs of our test booster contract which is Orbital Sciences Corporation.”

SpaceFlight Insider: Which leads me to my next question, since you will be launching from SLC-46 it will be a PeaceKeeper – correct?

Reed: “The main propulsion element of the launch vehicle will be a SR-118 PeaceKeeper first stage and we actually procured that motor through the Air Force, it’s an excess motor that they keep up at Hill Air Force Base in Utah. That’s where we actually get the motors from the Air Force, the government, then the government makes it available to Orbital and then Orbital is responsible for the integration of the SR-118 structure and the aeroshell with the avionics. So they do all the integrated analysis and design for the launch vehicle – even though the Air Force is providing the SR-118 to Orbital.

We at NASA have an inter-agency service agreement with the Air Force and they in turn have a contract with Orbital to deliver the abort test booster as government-furnished equipment to NASA.”

SpaceFlight Insider: Can you tell us a bit more about what Orbital will be contributing to this test flight?

Reed: “They are the launch service provider and when we initially went looking for someone to provide us with this, our procurement strategy was to go through the rocket sounding launch program out of Kirtland Air Force Base and they had four contractors at the time that were under an (inaudible) contract with the Air Force and we went through a competitive procurement amongst the four existing contractors that they currently had and then we did a down selection that the Air Force ran which NASA was involved in that, in the end, saw Orbital selected to provide this booster.” SpaceFlight Insider: With that, can you describe to us what the public will see on the day of the test?

Reed: “What’ll happen is, the abort test booster is there to put us at an altitude of about 25,000 feet. We have a box that we need this booster to place us into which is, nominally, at about 630 lbs per square foot of dynamic pressure. This is about where the max dynamic pressure (Max-Q) would occur on the SLS, Space Launch System as it’s going through its ascent. We’re looking at traveling at about roughly Mach 1.15 with an angle of attack of less than 4 degrees (inaudible) one degree and then we will initiate the abort.

Then we reorient the crew module and basically turn it. It’s about 30 seconds after we separate from the abort test booster that we’ll jettison the launch abort system and then the forward bay cover gets jettisoned and then we go ahead and start deploying the drogue chutes and then eventually the three main chutes. All of that? From take off until splash down – takes places in just under 10 minutes. We should land about four nautical miles due east of the coast there from SLC-46.”

SpaceFlight Insider: When is the Ascent Abort Test 2 currently set to take place? SpaceFlight Insider:  Which of the Orion test articles are planned to conduct this test? If memory serves, it will be the same one which will conduct the EFT-1 flight later this year?

Reed: “That’s correct – the current plan is to refurbish and re-fly the EFT-1 crew module.” After being lifted off the ascent abort booster, it will splash down in the Atlantic Ocean under parachute. Photo Credit: NASA

SpaceFlight Insider: Is this going to be part of a series of tests out at the Cape or is it more of a standalone event?

Reed: “We conducted a pad abort test out at White Sands in May of 2010, but this one? This is the only ascent abort test we are planning right now.”

SpaceFlight Insider: What’s the most important thing that you think the public should be aware of in terms of the Ascent Abort Test 2?

Reed: “I think the most important thing about this test is that we have a system which has been designed and tested to protect the crew – it’s all about crew safety, making sure that we deliver a system which is going to function and that the crew is going to have a successful mission and if anything should go wrong they can safely return.”

Reed: “Not a problem at all, it was my pleasure.”

NASA is currently planning to launch a flight test article of the Orion spacecraft in September of 2014. While Orion is planned for use on the space agency’s new heavy-lift booster, the Space Launch System or “SLS” – the rocket won’t be ready to carry it until 2017.

Space Florida has recently issued a release detailing how ATK had been tapped to refurbish Space Launch Complex 46’s communications systems. This points to efforts which are being made to ready the facility for this and other missions.