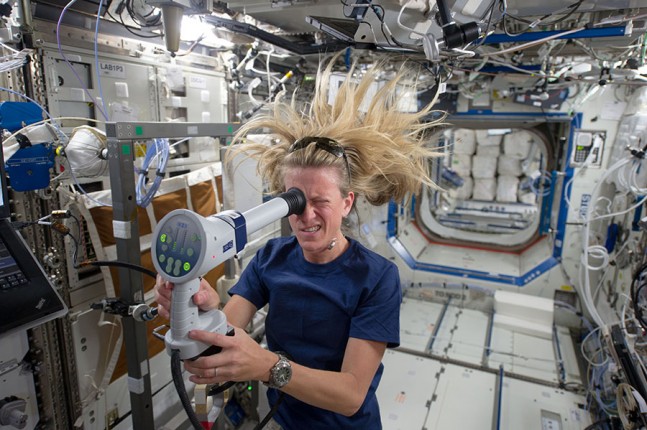 Visual impairment is one of the health impacts of spaceflight that will be studied by NASA and the NSBRI. Photo Credit: NASA

The 26 selected proposals came from 16 institutions in eight states and will be granted a total of approximately $17 million over a period of one to three years.  Scientists and technology experts from government and academia reviewed 123 proposals in response to the research announcement “Research and Technology Development to Support Crew Health and Performance in Space Exploration Missions.” NASA’s HRP will manage 21 of the research projects and NSBRI will manage five.

The chosen projects will study health impacts of the the space environment such as  visual impairment, behavioral health, bone loss, cardiovascular changes, human factors and performance, neurobehavioral and psychosocial factors. Research projects will also include the development and application of smart medical systems and technology. A complete list of the selected research projects is available here. The goal of HRP and NSBRI research is to provide knowledge and technologies that will  improve human health and performance in the space environment  and develop countermeasures for problems that could occur during space travel. Both organizations are dedicated to helping astronauts complete their missions and preserving their long-term health.

HRP was created in 2005 and is based at Johnson Space Center in Houston, Texas.  HRP’s mission is to quantify crew health and performance risks and develop strategies and technologies to mitigate those risks. this research often leads to advancements in treating illnesses in patients on Earth.

NSBRI is a non-profit consortium of 12 academic institutions studying long-duration spaceflight-related health risks. NSBRI was founded by NASA in 1997 and has research projects taking place at more than 60 institutions across the United States. The NSBRI is headquartered in the Consolidated Research Facility (CRF) on the Campus of Rice University. The CRF is also the home of the  Baylor College of Medicine’s Center For Space Medicine.

As with the HRP, discoveries from NSBRI funded research have benefitted health care on Earth. While mitigating spaceflight-related health issues, the Institute is transferring the solutions to patients suffering from similar conditions such as osteoporosis, muscle-wasting, sleep disorders, balance disorders and cardiovascular problems. Studies by NASA’s Human Research Program and the NSBRI may help protect the health of astronauts on future missions to Mars. Image Credit: NASA