Though much interest has been aimed at the progress of NASA’s Commercial Crew Program, the agency has been making steady headway with its deep space exploration programs. These advancements have come in both space and ground systems, and indicate the agency is still on the path to permanently expand crewed space exploration beyond low-Earth orbit. 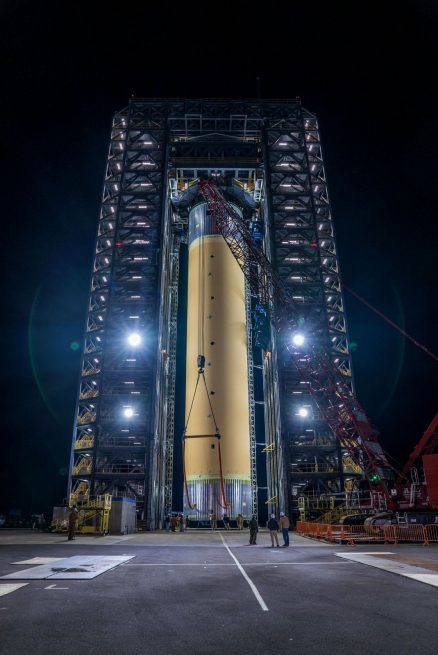 While the Space Launch System (SLS) has been the subject of several delays, the keystone to NASA’s deep space exploration system has seen significant progress as of late. Indeed, SLS has cleared some key milestones on the road to Exploration Mission-1 (EM-1), which is currently targeting a 2020 launch date.

Principal manufacturing of the super-heavy-lift rocket is essentially complete, with assembly and testing required before the vehicle can be certified for launch. Certifying such a large rocket is no easy feat, and requires flight-like hardware to be constructed and assembled for testing at various NASA centers across the country.

The largest of these components is the core stage’s liquid hydrogen (LH2) tank. Holding more than 537,000 gallons (2.03 million liters) of supercooled liquid hydrogen, the mammoth tank was recently installed in Test Stand 4693 at NASA’s Marshall Space Flight Center in Huntsville, Alabama. For testing, the tank will be filled with inert liquid nitrogen and be subjected to stresses and loads that will simulate the conditions expected during launch and flight.

The core stage’s smaller liquid oxygen (LOX) tank will arrive at Marshall this summer, and will undergo similar load tests as its LH2 cousin. Joining in the test regime are other core stage components: engine section—where the four RS-25 engines will be mounted—the intertank, the forward section, and the launch vehicle stage adapter.

Not to be outdone by the structural portion of the vehicle, SLS’s propulsion elements are either in late stages of testing, or are complete and awaiting shipment and assembly. NASA plans to complete testing of all four flight RS-25 engines in Spring 2019, after which they’ll be shipped to the Michoud Assembly Facility later in 2019 to be joined with the engine section.

The completed engine section will then be mated to the core stage and will be put through a simulated launch as all four engines fire as a complete assembly for the first time during what is called the “green run”.

Lastly, all 10 segments of SLS’s twin solid rocket boosters are finished and are awaiting shipment to Kennedy Space Center (KSC).

It takes more than just a rocket and spacecraft to make a launch successful. Indeed, it is often the unseen ground systems that can make-or-break a space program. To that end, NASA’s Exploration Ground Systems (EGS) team has been bolstering the facilities at KSC to support not only the launch of SLS on EM-1, but also for flights beyond. 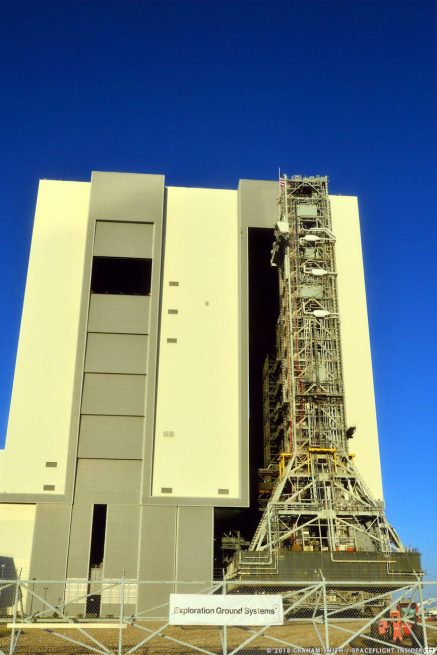 Like its Saturn V ancestor, SLS will travel to the launch pad sitting atop a mobile launcher. The towering launcher has already made one trip to Launch Pad 39B, and is now undergoing testing inside the Vehicle Assembly Building (VAB). It will make one more trip to Pad 39B in Spring 2019 for final site testing.

Lastly, the team plans to upgrade facilities in firing rooms 1 and 2 to support SLS launches.

Set to sit atop the 212-foot (64.6-meter) tall SLS core stage is the Orion spacecraft. Like its launch vehicle, Orion must also withstand a comprehensive testing evolution before it can take flight on EM-1.

Once Orion and its companion service module are joined, they’ll undergo testing in a vacuum chamber at NASA’s Plum Brook Station. In the chamber, the spacecraft and service module will face thermal and electromagnetic conditions similar to what is expected to be encountered on the mission.

But the most visible test will come in June when an Orion test vehicle is expected to undergo an emergency abort test. Called Ascent Abort-2 (AA-2), the test will see Orion’s launch abort system activated at the most stressful phase of the flight profile in order to validate the system’s capabilities should an in-flight emergency occur on an actual mission.

These tests and upgrades are among the final steps needed to prepare for a return of astronauts to the Moon, this time to stay.

Despite valid criticism, SLS has a heroic story behind it, and is worth appreciating. Many, many engineers and others worked on it, as well as its previous incarnation as the Ares I and Ares V duo. When that earlier form appeared too challenging for the available budget, a small group of engineers, both inside and outside NASA, were able to band together, and were able to successfully present the SLS design as an affordable redesign. I think that much of the billions of dollars that have been spent on SLS and Ares over many years have gone to seriously hard engineering and ingenuity. May much good come from it all!

Nice “Moon2Mars” speech by Jim (YAWN!) just like the previous “Journey To Mars speeches by his predecessor Charlie (YAWN!). Hoping that Congress tells NASA to focus on getting commercial crew flying back and forth regularly to ISS, and give Elon Musk plus Jeff Bezos whatever funding is necessary to get American astronauts beyond earth orbit. Otherwise talk is cheap.