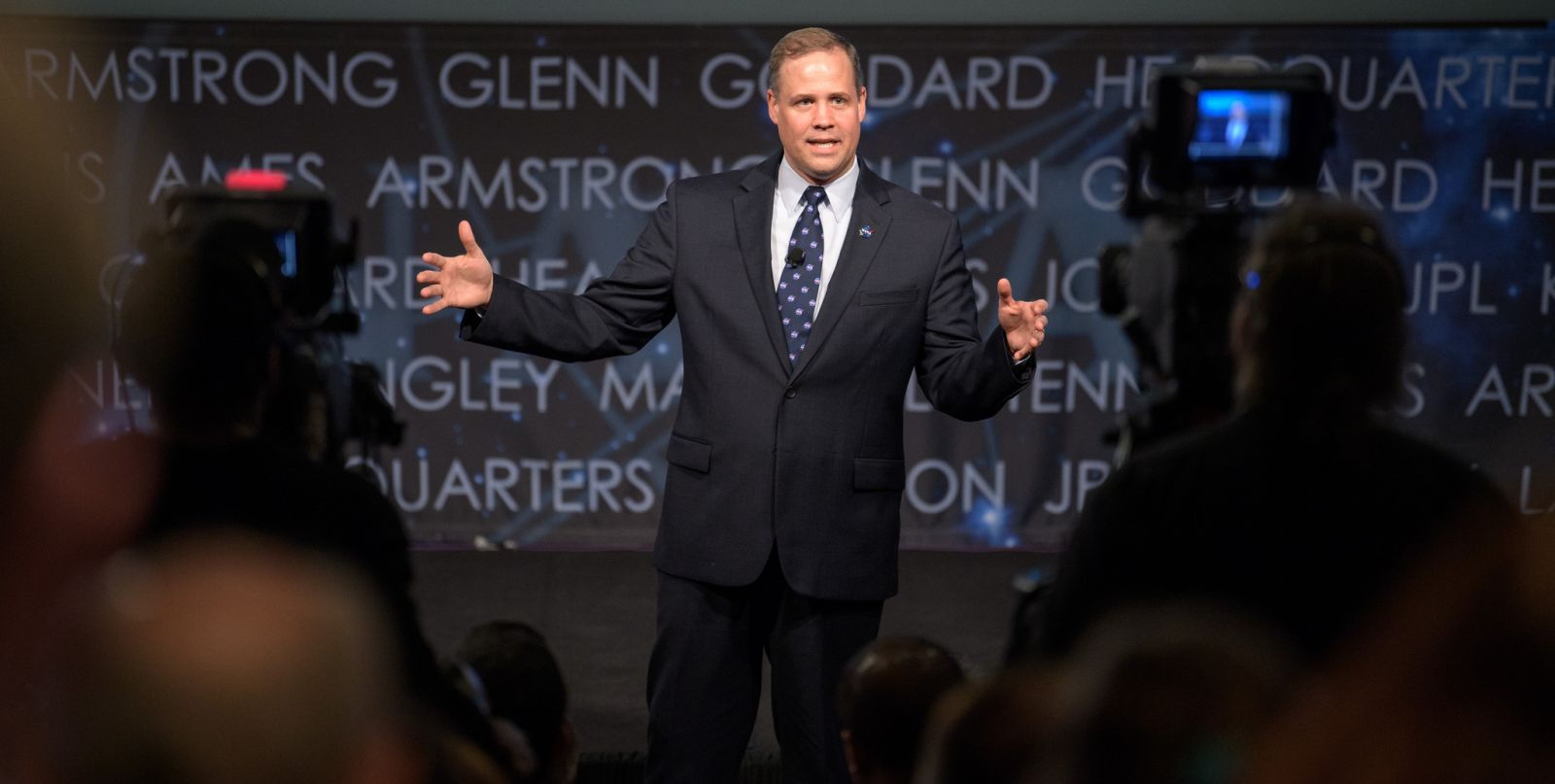 NASA Administrator Jim Bridenstine answers agency questions regarding how it will achieve the goal of landing humans on the Moon by 2024. Photo Credit: Bill Ingalls / NASA

In a town hall meeting at NASA headquarters, Administrator Jim Bridenstine answered some of the agency’s most-pressing questions regarding the recent challenge by the vice president to return humans to the Moon by 2024.

Among the top questions submitted via an online form for the April 1 meeting, the biggest questions NASA employees had were about funding and support by the U.S. Congress to meet the stated 2024 deadline set by Vice President Mike Pence during the fifth meeting of the National Space Council on March 26, 2019.

“This is a once-in-a-lifetime opportunity,” Bridenstine said during a live broadcast of the town hall. “I hope everybody here takes that away. This is an opportunity for people in this room, and people watching from across the agency to say where you were when your talking to your grandchildren or your great-grandchildren. This opportunity before us is something we haven’t had in a very long time, saying ‘we’re going to go to the Moon and we’re going to go within five years.’ In fact, its never happened before.”

Bridenstine said even President Kennedy in 1961 gave a deadline beyond the longest he could have served in office. It was, in fact, two presidents later during the Richard Nixon administration when Apollo 11 landed on the Moon in 1969. The administrator said the fact that the Trump administration challenged NASA to do it within the president’s potential second term means it is “a very serious proposal.”

An illustration of an unpiloted commercial lander leaving a fledgling Lunar Gateway for a descent to the surface of the Moon. Image Credit: NASA

Same plan, but scaled back

From the town hall meeting, it appears the plan NASA has to return humans to the Moon in five years is essentially a scaled-back version of what the organization was already planning to do by 2028. It would involve the long-delayed Space Launch System and Orion spacecraft, an initial version of the Lunar Gateway and a three-stage human landing system.

For the first human landing in 2024, the baseline plan is to launch SLS with a crewed Orion and a lunar ascent vehicle (possibly built for only two people) and rendezvous with a partially-completed Lunar Gateway, which Bridenstine has described as a “reusable command module.”

At the Gateway, there would already be in place a fully-fueled transfer vehicle and an expendable descent vehicle. These would likely have been built and put in place by commercial companies and commercial rockets.

After the surface mission is over, the astronauts would launch in the ascent vehicle all the way back to the Gateway. The ascent vehicle and transfer vehicle would await a refueling ship, likely commercially built, while a new descent stage would be launched for the next human mission.

Meanwhile, the crew would board Orion and leave the Gateway to return to Earth. 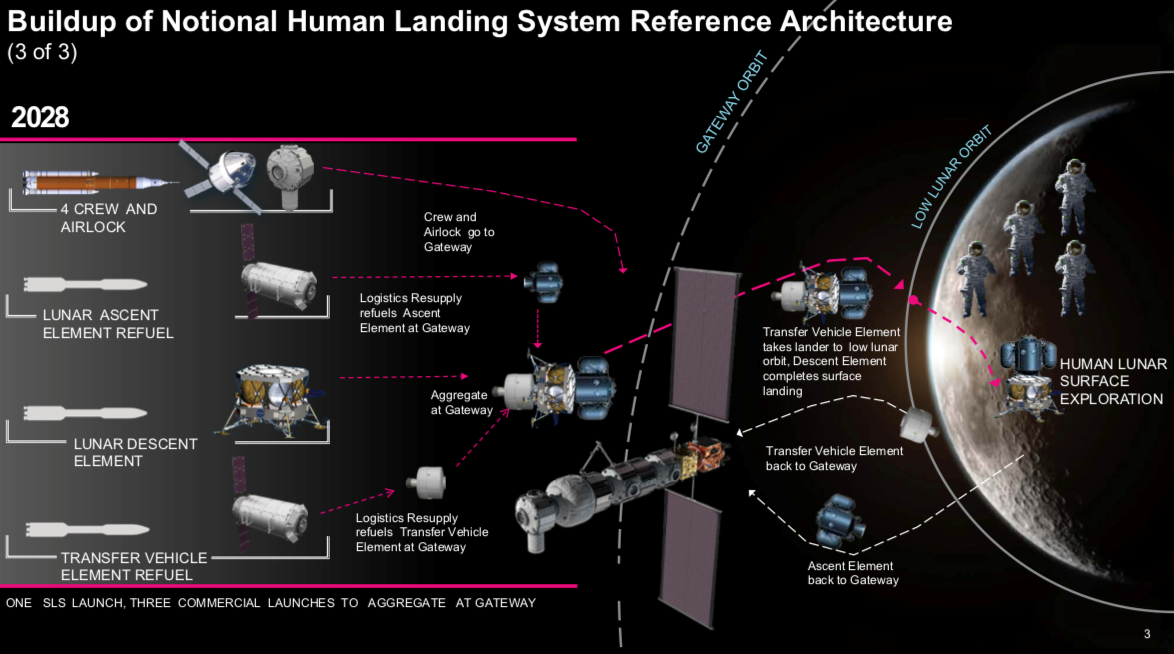 The proposed architecture to send humans to the Moon by 2028 had three parts that could be launched, in part, by commercial rockets, refueled by commercial spacecraft, and be based at NASA’s future Lunar Gateway. To meet the vice president’s 2024 deadline, it is expected to require the acceleration of these plans. Image Credit: NASA

Bridenstine said if NASA is to land on the Moon by 2024, then contracts have to be created “very, very soon.” He also said it means the development schedule for SLS will have to be accelerated by removing any test that isn’t necessary.

Additionally, Bridenstine said accelerating schedules means developing in parallel, rather than in series. He cited the engine section of the SLS as an example of an item in the critical path. It’s taking longer to develop than expected and other items down the road are being held up as a result.

While a June 2020 launch of SLS isn’t expected to be achievable, it is hoped these changes will increase development time to allow the Exploration Mission-1 flight to happen as soon as possible. EM-1 is designed to be a test flight of Orion, with the European service module, around the Moon before returning to Earth at a lunar re-entry velocity. 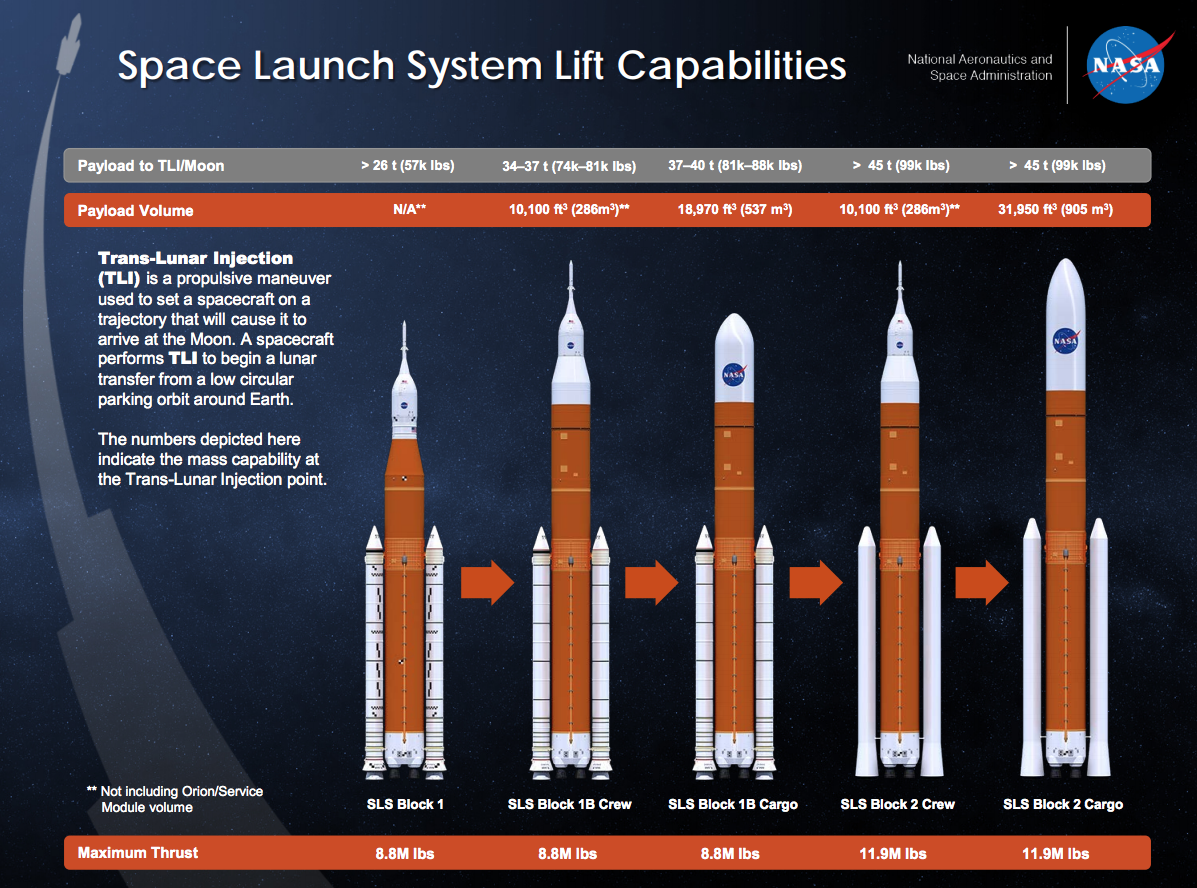 NASA’s Space Launch System was designed to evolve over time, from its initial Block 1 configuration up to the Block 2. Bridenstine said Block 1B would likely be needed to send humans to the Moon by 2024. Image credit: NASA

All of this requires money, likely more than the Trump administration initially requested for fiscal year 2020. In fact, that budget request actually decreased funding for SLS and all-but-cancelled the Exploration Upper Stage.

But now NASA says it needs that and more in order to accomplish the goal of landing humans on the Moon by 2024.

Bridenstine said it is his job to work with the Trump administration, Congress and the Office of Management and Budget to make sure there is broad consensus about particulars of the 2024 goal before going to Congress to request the required funding.

“My goal is to work with all players—all players—within the executive branch, within the House and within the Senate to achieve the end state, which is boots on the Moon by 2024,” Bridenstine said.

Go NASA,,lets hope this is goal can be achieved, The US needs something we can all get behind..