NASA eyes ACES ‘Pumpkin Suit’ for use on Orion spacecraft 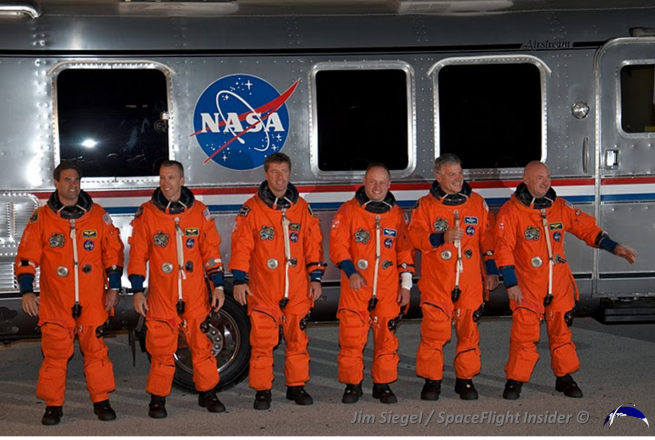 NASA has been looking into using the ACES design for possible use on the space agency's Orion spacecraft. Photo Credit: Jim Siegel / SpaceFlight Insider

Since 1994, space shuttle crews launched off the pad and returned to Earth, using what are known as the “Advanced Crew Escape System” (ACES) – more commonly known as “pumpkin suits.” Now? The space agency is looking into utilizing a variant of these spacesuits for crews who will venture forth out into the solar system using NASA’s next crew-rated spacecraft – the Orion Multi-Purpose Crew Vehicle.

The orange-colored suits are being tested at the Sonny L. Carter Neutral Buoyancy Laboratory (NBL) located near Johnson Space Center in Houston, Texas. They will require extensive testing if they are to accomplish the missions NASA has planned for them. The version of the ACES suit which is being tested was utilized by space shuttle crews for 17 years. Photo Credit: Jason Rhian / SpaceFlight Insider

With plans still in effect to send astronauts to destinations such as asteroids, the space agency needs suits which are better suited for Orion’s confines than the white Extra-vehicular Mobility Unit spacesuits that crews use on the International Space Station. ACES will need to be modified so as to be suitable for use both inside and outside the spacecraft.

“The shell of them is very much the same, and to the casual user you may not even notice the difference, but internally we modified them to work with the plumbing inside Orion,” said Dustin Gohmert, Crew Survival Systems Manager at JSC.

NASA engineers have put the ACES system through its paces at the NBL so as to better determine what needs to be added to the suit so that it can accomplish the new tasks that are currently laid out in front of it. The suits will require modifications to those parts which require a greater range of flexibility.

The first U.S. astronaut to utilize a spacesuit for an extra-vehicular activity was Ed White on Gemini 4 in 1965. Since that time, NASA has employed a wide range of spacesuits to accomplish the various missions that astronauts have been assigned to I the intervening four-and-a-half decades. As mentioned the version of ACES which is being tested out for use on missions using Orion entered into service in 1994, after the Challenger disaster in 1986, NASA issued a more robust suit for crews than many of the missions before the accident had used.

“We’re stepping back to our heritage to be able to use one suit for multiple tasks,” said Gohmert.

NASA is using the NBL to test out a variety of exercises that the spacesuit will need to accomplish. These include moving around both inside and out of the spacecraft, exiting Orion and so on.

Currently, the first uncrewed flight of an Orion spacecraft is scheduled to take place in September 2014 atop a United Launch Alliance Delta IV Heavy rocket. Three years later in 2017, Orion will finally lift of atop the launch vehicle it was built for, NASA’s new heavy-lift booster the Space Launch System or “SLS.” If the agency’s budget and scheduling are maintained, crews should fly on Orion on a cislunar mission in 2021.