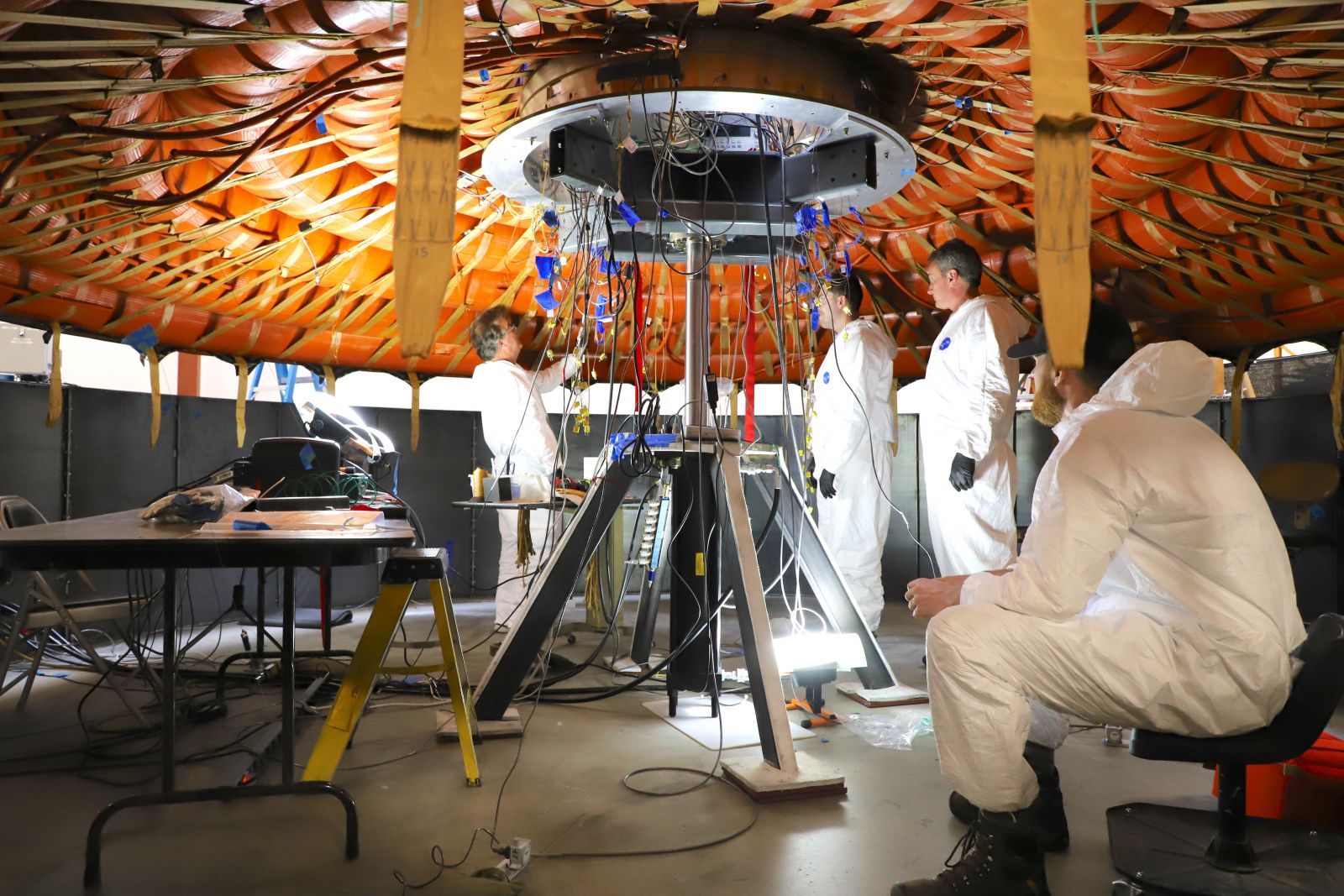 As humanity prepares to face the extreme challenges of deep space, NASA engineers are hard at work researching new and innovative ways to safely land large payloads, including astronauts, on Mars.

In a recently shared video from NASA, a giant set of inflatable rings can be seen being expanded in what can almost be described as a Christmas tree shape, forming a conical structure that very much resembles a traditional heat shield seen on many spacecraft.

Known as the Bernard Kutter Low-Earth Orbit Flight Test of an Inflatable Decelerator, or LOFTID, this technology is being designed to improve the safety and efficiency of landing humans on Mars.

According to NASA, the aeroshell will be about 20 feet (6 meters) in diameter when fully deployed, which is nearly five times its size when stowed. For comparison, the Orion spacecraft that is set to return humans to the Moon has a traditional rigid heat shield with a diameter of 16.5 feet (5 meters).

NASA said the structure is made of synthetic fibers that are braided into a series of tubes to make it 15 times stronger than steel. Each successive tube is slightly larger than the next in order to form the blunt cone shape of a heat shield. It is expected to be able to withstand about 2,900 degrees Fahrenheit (1,600 degrees Celsius).

It is hoped that LOFTID will help tackle the problem of payload fairing sizes on rockets, which limits the size of traditional heat shields. Currently payload fairing sizes in existing rockets range between 13 feet and 18 feet (4 meters and 5.5 meters) with at least one rocket with a 23-foot (7-meter) fairing expected to be available within a year or two.

However, something carrying large payloads, including human-rated spacecraft, will need to be much larger in order to sufficiently slow down in Mars’ thin atmosphere. NASA said it believes this design can be scaled up to accommodate future missions. 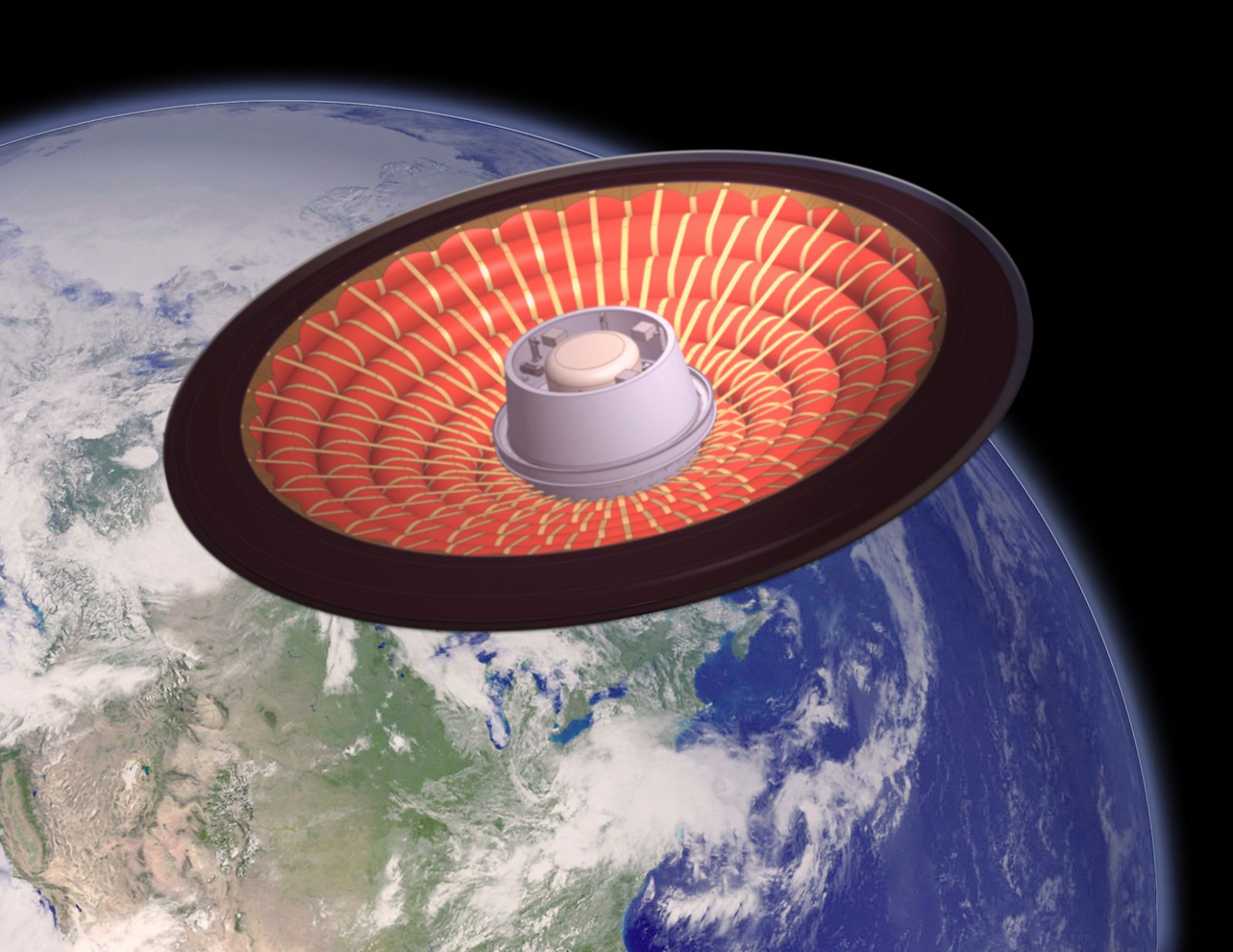 An illustration of the LOFTID demonstrator in orbit around Earth. Credit: NASA

While it may seem like science fiction, the inflatable aeroshell is actually expected to be put to practical use later in 2022, launching as part of a rideshare alongside a satellite for the National Oceanic and Atmospheric Administration that is destined for a polar Earth orbit.

Liftoff is expected to occur atop a United Launch Alliance Atlas V rocket in the 401 configuration in fall of 2022 from Space Launch Complex 3E at Vandenberg Space Force Base in California.

Once the primary satellite has achieved orbit, the rocket’s Centaur upper stage will maneuver it and LOFTID to an orbit that will allow for an ideal atmospheric entry point.

The heat shield will then inflate. Before being ejected from Centaur, the upper stage will spin to give LOFTID gyroscopic stability.

Centaur will perform a divert maneuver so it won’t accidentally hit the technology demonstrator as the both reenter the atmosphere.

LOFTID is then expected to reenter the atmosphere before slowing down enough for a series of parachutes to deploy, allowing it to safely splash down in the Pacific Ocean, likely near Hawaii, to be recovered and analyzed.

The atmosphere on Mars is far less dense than that on Earth, so the actual inflatable body would need to be much larger than the one being tested later this year.

However, if this test proves to be a success, then the design for future spacecraft might look a lot different, and more inflatable in the future.