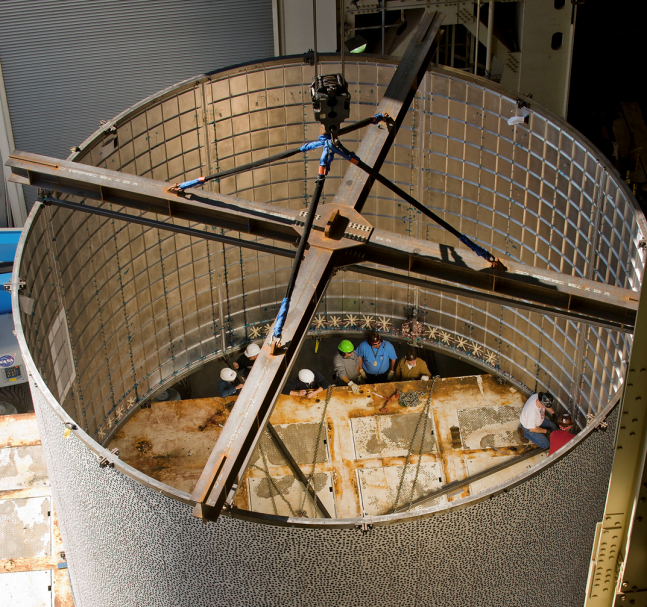 Engineers at NASA's Marshall Space Flight center in Alabama recently tested a fuel tank to see how it handled stresses while being crumpled. Photo Credit: NASA

NASA engineers are always striving to build it – better. This was the driving motivation behind recent efforts to crumple an aluminum-lithium cylinder which mirrors the size of the fuel tank barrels of some of the largest rockets ever made. The space agency had some 20 high-speed cameras trained on the cylinder to record even the minutest of changes to it as it was placed under nearly one millions pounds of force. The tests were conducted at NASA’s Marshall Space Flight Center (MSFC) in Alabama last week.

Known as the: “Shell Buckling Knockdown Factor Project” – it is hoped that these tests will provide engineers with insights into ways to produce lighter and cheaper rockets. Engineers started the tests on Dec. 9 in order to gain data which will be employed on the space agency’s next generation heavy-lift booster, the Space Launch System or “SLS.”

Tests involved increasing amounts of force to an empty, but pressurized rocket fuel tank to determine its structural integrity. Tests were conducted at MSFC’s load test annex, which is part of the Structural and Dynamics Engineering Test Laboratory. The lab helped test such iconic vehicles as the Saturn V rocket, the space shuttle and the International Space Station. The tank was covered in black and white dots allowing the high-speed cameras to track changes on the tank’s surface as they occurred. Photo Credit: NASA

“These full-scale tests along with our computer models and subscale tests will help NASA and industry design lighter, more affordable launch vehicles,” said NASA’s Mark Hilburger. “We were looking at real-time data from 20 cameras and more than 800 sensors during the final test.”

Hilburger works in the Structural Mechanics and Concepts Branch at NASA’s Langley Research Center in Hampton, Va. The tests are being conducted on behalf of NASA’s Engineering and Safety Center.

These days the space agency is all about maximizing the assets that it has. Given this, NASA utilized unused tank hardware leftover from the space shuttle program. The tank was covered in black and white dots which allow engineers to more-easily track how the tank behaves as it is being crumpled.

“When it buckled it was quite dramatic,” Hilburger said. “We heard the bang, almost like the sound of thunder and could see the large buckles in the test article.”

Using the data gleaned from this test, engineers are developing guidelines which could possibly see the rocket’s weight drop by approximately 20 percent. With this savings in weight, it is hoped that these launch vehicles can ferry more weight out of Earth’s gravity well.

NASA has been directed by the Obama Administration to send astronauts to an asteroid and to Mars sometime in the 2030s.

“In addition to providing data for the Space Launch System design team, these tests are preparing us for upcoming full-scale tests,” said Matt Cash, Marshall’s lead test engineer for the shell buckling efforts and the SLS forward skirt and liquid oxygen tank structural testing. “Performing structural tests on hardware that is the same size as SLS hardware is providing tremendous benefit for our future development work for the rocket.”

NASA hopes that SLS will allow it to return to the business of space exploration. The space agency has not sent crews beyond the orbit of Earth since the early 1970s. SLS will deliver NASA’s Orion Multi-Purpose Crew Vehicle and other elements to conduct deep space missions into orbit. The first test flight of Orion will take place late next year, with SLS’ first flight scheduled to take place in 2017.

Ya gotta know that the engineers are saying to themselves, “This makes crunching all those hours of calculus homework worth it. I can’t believe they’re actually paying me to do this! This is great stuff!” Thanks for “the story behind the story” Jason, lovin’ this site, information and insight to be found nowhere else!