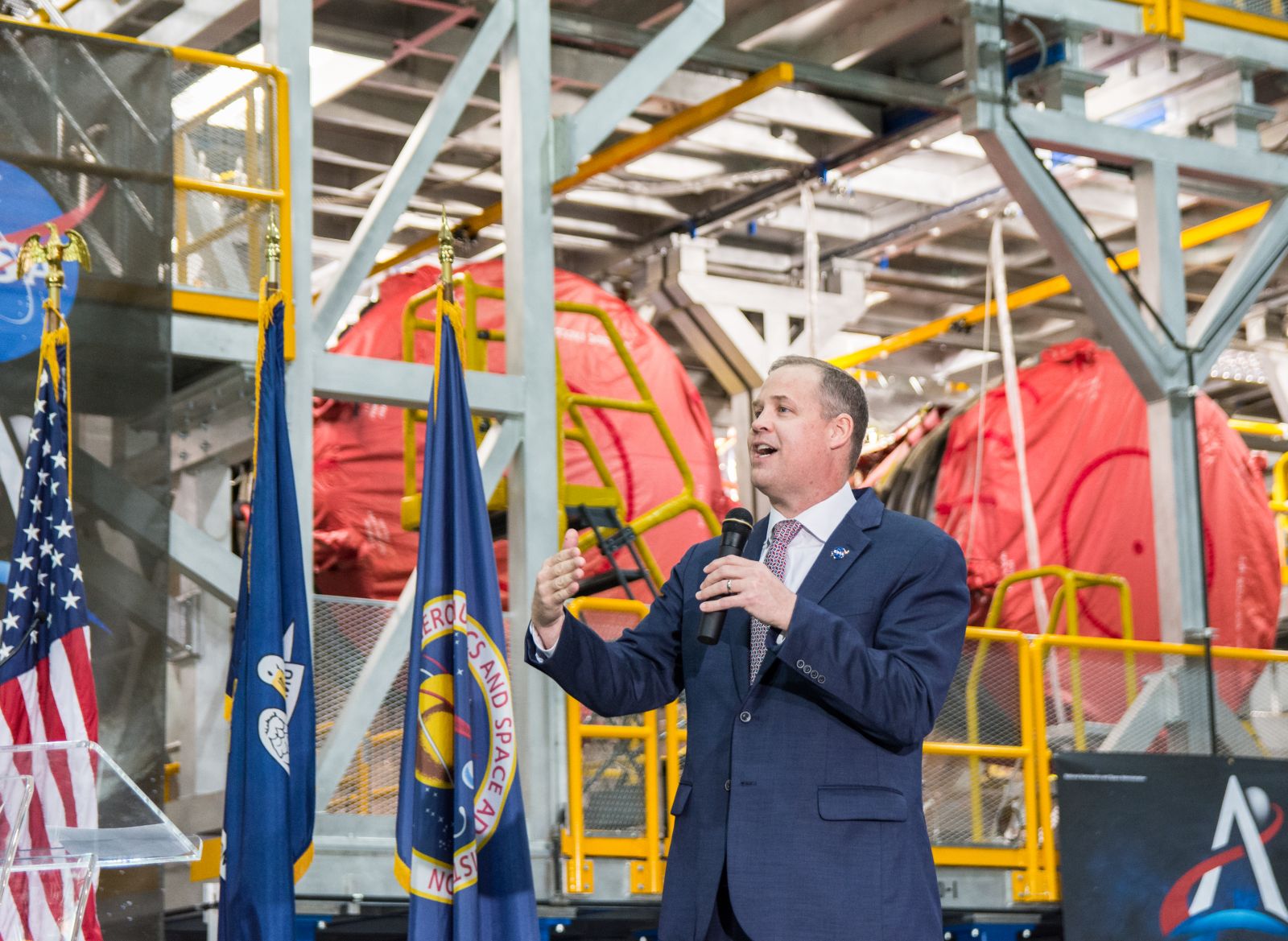 “Go SLS! Core stage complete!,” stated Bridenstine to a standing-room-only crowd. The administrator noted that this is the first step towards the launch of Artemis 1, with the goal to sending the next man — and the first woman — to the lunar surface on Artemis 3 by the end of 2024.

Though humans first set foot on the Moon more than fifty years ago, the missions were brief and the accomplishment seemingly abandoned when Apollo 17 departed the lunar surface in 1972. The agency, with a presidential directive, intends to return humans to Earth’s natural satellite by the end of 2024, with a program that is sustainable. 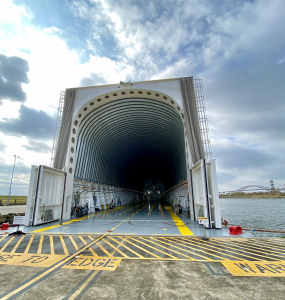 SLS’s large components, such as the core stage, will be transported in the cavernous Pegasus barge. Photo credit: Curt Godwin / SpaceFlight Insider

The announcement of the core stage’s completion came on the heels of the news that the structural test article (STA) for the core stage’s liquid hydrogen tank was recently tested beyond expected flight loads to determine at what point the hardware might fail. When questioned about this intentional failure test and what NASA has learned that might impact future SLS construction, Bridenstine shared that the test was impressive, both for what it showed for SLS’s strength and purely because it was incredible to see the tank explode.

“We test things to destroy them so that we’re safe,” Bridenstine told SpaceFlight Insider. The Administrator promised to share the video of the tank exploding, which he later did via his Twitter account. Bridenstine continued in his answer by stating that many workflow and construction efficiencies have been discovered during the construction of SLS 1 for Artemis 1 that will carry over to future vehicles.

“The efficiencies we’re seeing today because this one is now complete are amazing,” continued Bridenstine, stating that they’re seeing up to 40 percent efficiencies on some processes due to lessons learned.

Though Artemis 2 is already under construction, the administrator was quick to note that funding for Artemis 3 needed to be secured since that is the vehicle that will take the next man and first woman to the Moon.

As for Artemis 1’s core stage, NASA hopes to have it delivered to nearby Stennis Space Center for further testing no later than January 2020, culminating in a full-duration burn of all four RS-25 main engines. This test, called the ‘green run’, will give the agency the data it needs to ensure SLS is ready for flight.

The agency wants people to know that Artemis is not a rehash of Apollo, with some footprints and flags left on the lunar surface, never to return.

“The challenge with Apollo is that it ended,” concluded Bridenstine. “What we’re doing now is something that is sustainable. Something that, when we go to the Moon this time, we will not have another generation that goes by where we don’t have people living and working on another world.” 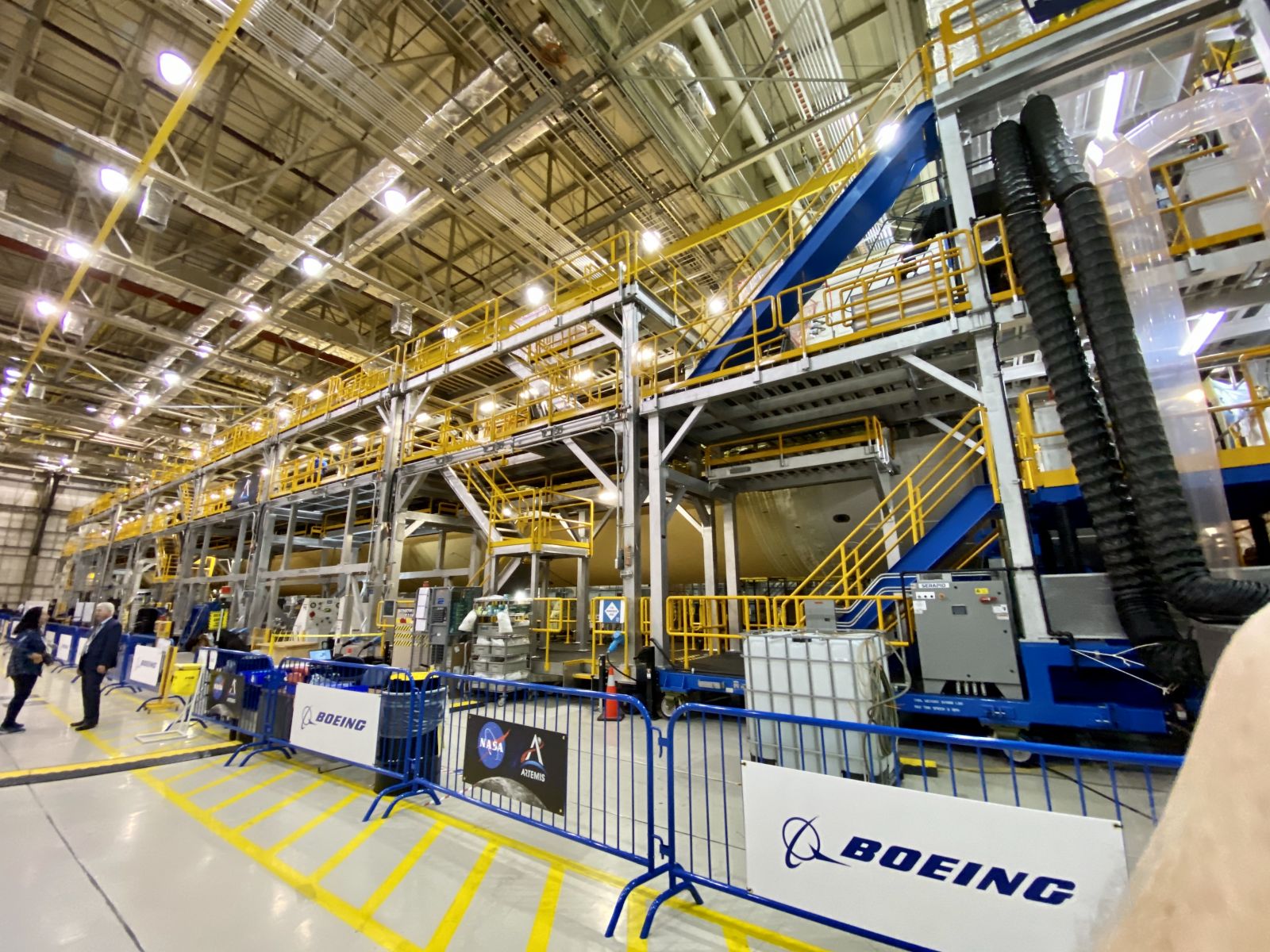 The SLS core stage for the Artemis 1 mission lays horizontally, covered in scaffolding, as it awaits final testing prior to being shipped to Stennis Space Center. Photo credit: Curt Godwin / SpaceFlight Insider

Couple of points:
1. Not the most powerful rocket until it flies.
2. Not sustainable at the cost that is being discussed at present i.e. > $800 million per launch, and that’s just the booster
3. All throwaway, nothing reusable therefore again, not sustainable.
I call bs on Bridenstine’s use of the term ‘sustainable’.
Cheers
Neil