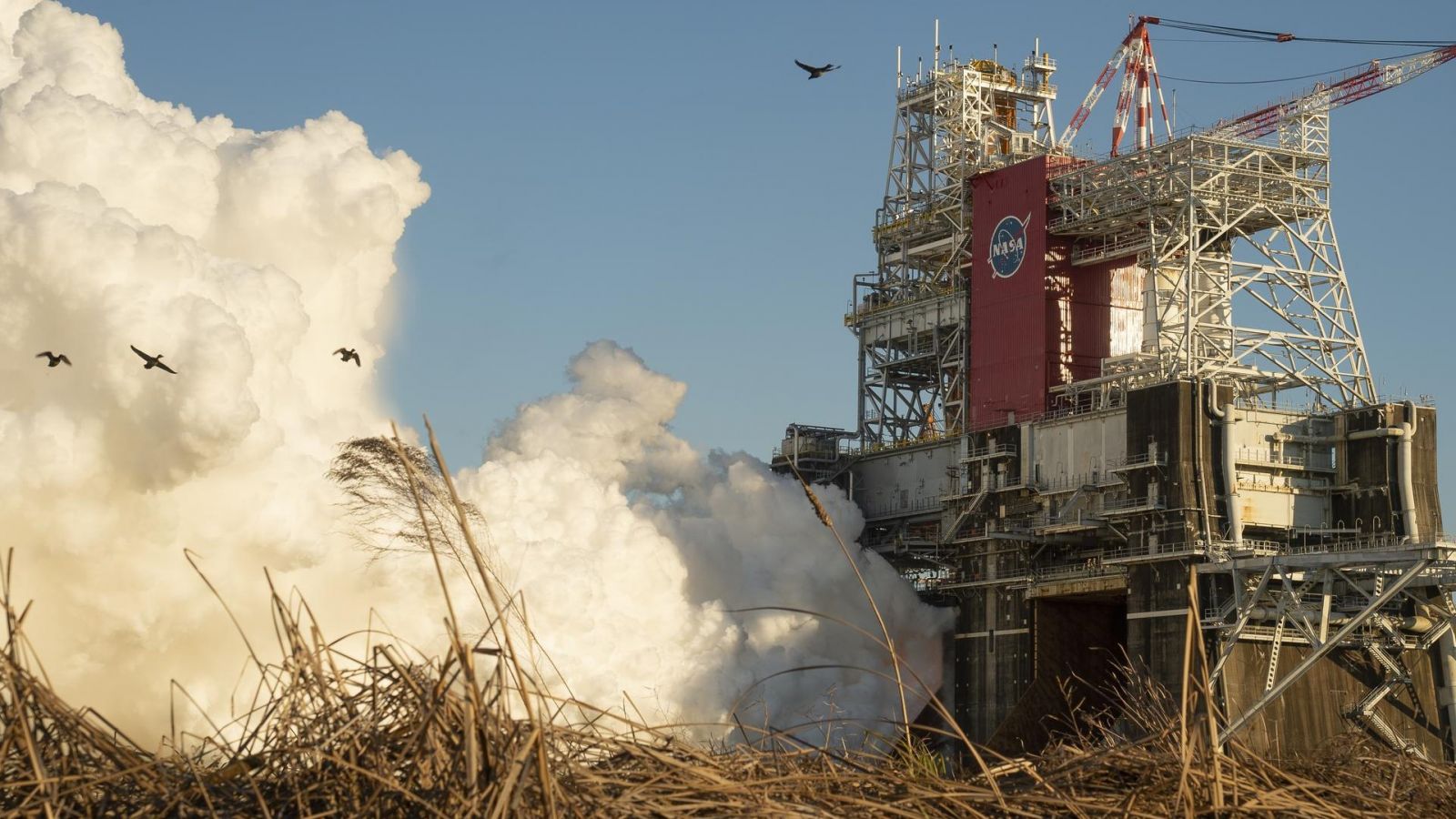 The Space Launch System core stage during its Jan. 16, 2021, hot fire test, which was aborted after about a minute. Credit: NASA

Nearly two weeks after the first attempt, NASA and prime contractor Boeing announced their decision to proceed with a second hot fire test of the Space Launch System core stage.

The second test is scheduled to take place as soon as the week of Feb. 21, more than a month after the first test on Jan. 16 was aborted after about 67 seconds.

The core stage for the Artemis 1 mission is currently attached to the B-2 test stand at Stennis Space Center in Mississippi. Over the last year it has undergone a series of evaluations collectively known as the Green Run. The final test involves firing all four RS-25 engines at the base of the core.

NASA and Boeing attempted the hot fire for the first time on Jan. 16. The test was expected to last up to about eight minutes to simulate the full-duration burn the engines would undertake as they lift the SLS rocket into space.

Part of the test parameters associated with the hot fire included the gimbaling, or movement, of the four RS-25 engines as to direct their thrust in order to steer the giant SLS rocket in flight. Each engine uses two actuators that generate the force needed to precisely control its pivoting within the thrust vector control system. These actuators are controlled by a core auxiliary power unit (CAPU), an internal engine providing power for the vehicle’s systems, including the hydraulic system.

During the hot fire, the CAPU’s hydraulic system associated with engine No. 2 exceeded the intentionally overly-conservative testing limits. This exceedance caused the onboard computers to shut down all four of the core stage RS-25 engines in an abundance of caution in an attempt to protect the vehicle. NASA said had this anomaly occurred in flight, the core stage would have likely proceeded as normal, given that testing parameters on the ground are programmed to be much more sensitive than that in flight.

While the test lasted just over a minute, engineering teams at NASA and Boeing determined that they would need the engines to successfully burn for approximately four minutes in order to obtain enough data to determine whether the core stage is ready for flight. Teams were able to pull data from the initial hot fire to determine what exactly caused the early shutdown, as well as what needed to be fixed in order to improve the efficiency of the engines to prevent this type of shutdown from happening again.

Teams at Stennis are currently making minor repairs to the B-2 test stand, as well as cleaning up and refurbishing the RS-25 engines.

Upon successful completion of the second hot fire, it will take just over a month to remove the rocket stage from the test stand and ready it to be transported via the Pegasus barge to Kennedy Space Center in Florida. From there, the core will be mated to twin five-segment solid rocket boosters currently being stacked in the Vehicle Assembly Building.

NASA is targeting no earlier than November 2021 for Artemis 1, which will the SLS rocket send an uncrewed Orion spacecraft on a month-long flight around the Moon.

The first hot fire on Jan. 16. Video courtesy of NASA