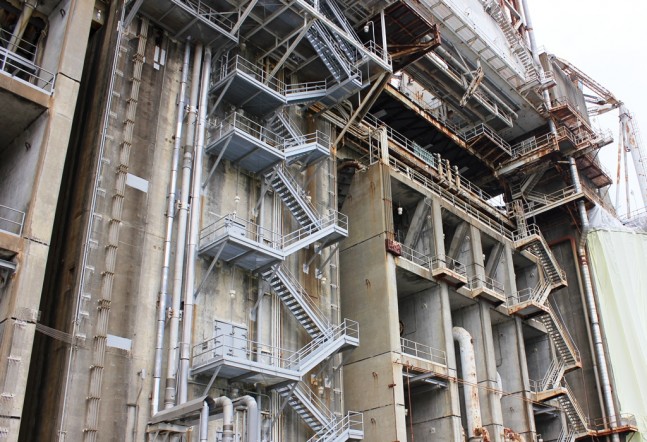 The B-2 vertical, static-firing test stand at NASA’s Stennis Space Center in Mississippi, originally built to test Saturn rocket stages, is being modified to test the Space Launch System (SLS ) core stage in late 2016 and early 2017, prior to its first unmanned mission flight. The work began on May 13 with the lifting of large structural steel sections onto the stand. The modification includes repositioning and extension of the B-2’s Main Propulsion Test Article (MPTA ) framework, which supports the rocket stage for testing. NASA intend to add the large structural steel sections that will extend its height.

The framework, built in the late 1970s to support testing of the space shuttle MPTA, stands 61 feet (18.6 m) high and contains about 1.2 million pounds (544.3 metric tons) of fabricated steel. During the shuttle era, it was modified to test the Space Shuttle Main Engine (SSME ). The framework was repositioned on the stand late last summer.

The SLS stage is different from the Saturn stages and the space shuttle MPTA installed and fired on the stand in earlier years. It is taller, standing 212 feet (64.6 m). To lift the stage into place, the derrick crane atop the stand must be extended. Three levels of structural steel sections at B-2 Test Stand will be lifted into place during the upcoming weeks; this photo shows a base section on its way into place. (Click to enlarge.) Photo Credit: NASA

Three levels of structural steel sections will be lifted into place during the upcoming weeks. Once all sections are lifted and anchored in place, the MPTA framework will extend 100 feet (30.5 m) higher. SLS testing will involve installing and anchoring the core stage onto the B-2 stand and simultaneously firing its four RS-25 engines, just as will occur during its mission flight.

“These tests will help us understand how the spacecraft and engines behave and provide critical information for ensuring mission safety,” said Rick Rauch, manager of the B-2 Test Stand Restoration, Buildout and Test Project. “After all, if there are problems, it’s better to address them on the ground than in the air.”

SLS, the world’s most powerful rocket, is intended to launch astronauts in NASA’s Orion spacecraft on missions to an asteroid and eventually to Mars while opening new possibilities for other payloads including robotic scientific missions to places like Mars, Saturn, and Jupiter.

The first flight test of the SLS will be configured for a 70-metric-ton (77-ton) lift capacity and carry an uncrewed Orion spacecraft beyond low-Earth orbit to test the performance of the integrated system. As the SLS evolves, it will be the most powerful rocket ever built and provide an unprecedented lift capability of 130 metric tons (143 tons) to enable missions even farther into the Solar System.

The SLS program critical design review is targeted to conclude in late July. The first flight of SLS, Exploration Mission 1, or “EM-1”, is currently slated for launch in 2018 from Kennedy Space Center’s Launch Complex 39B in Florida.

I thought that the basic idea with reusing old tech like the 1970’s space shuttle launch stack design, was to lower costs. The highest possible ambition the SLS can have is to fly a few times before its basic concept is hopelessly outcompeted compared to the upcoming 2020’s technology. But it seems as if EVERYTHING has to be remade in order to create the SLS. It seems as if it has nothing at all to do with simply reusing the launch stack of the shuttle. The boosters, the main engines, the fuel tank, the launch pad, the barge, the welding equipment, the mobile launch tower and whatnot and now the test stand all has to be remade. And although each of these failures of the basic concept is a good reason to cancel this crap, there is a hurrah propaganda being spread about it, as if higher costs were a purpose in itself (and I suppose it is, for those who receive that tax money).

Wouldn’t it be cheaper, simpler, faster and safer to design a modern launcher from scratch instead? SpaceX, the Russians, the Indians do it for less than tens of billions of dollars in less than tens of years. And they are doing something new, not only copying half a century old stuff.

Reuse the launchers, not the design!