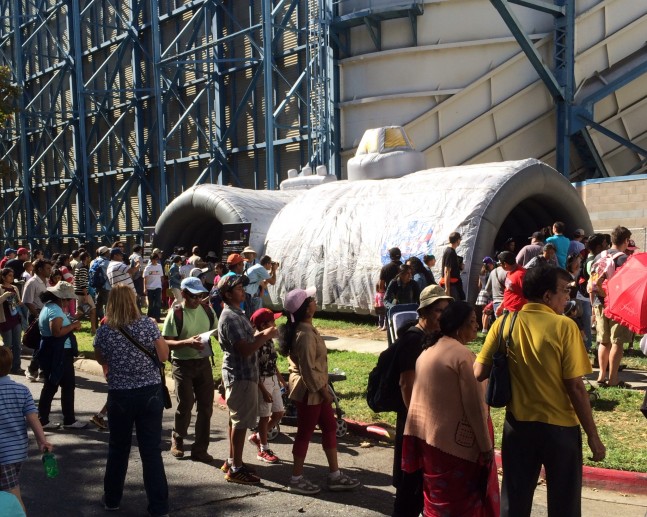 This inflatable mock-up of a space station module was part of a large display dedicated to science being conducted aboard the International Space Station (ISS). Photo Credit: Jim Sharkey Ames was created in 1939 as a laboratory of the National Advisory Council on Aeronautics (NACA) and became a research center of the newly-formed NASA in 1958. In 1994, NASA took stewardship of the historic Moffett Field from the Navy. The Center’s NACA heritage was literally on display in the form of research aircraft near Hanger One and exhibits of rotor-craft research, Unmanned Aerial Vehicles (UAVs) and wind tunnel models.

Ames is home to several wind tunnels, including the Unitary Plan Wind Tunnel Complex, The Fluid Mechanics Laboratory and the National  Full Scale Aerodynamics Complex (NFAC ), home to two of the largest wind tunnels in the world. Inside the 80-by 120-foot wind tunnel of the NFAC is a working 1/50th-scale model of the wind tunnel itself. Photo Credit: Jim Sharkey

Inside the NFAC’s 80-by-120-foot wind tunnel was a 1/50th-scale working model of the wind tunnel itself. The model, along with scale replicas of nearby existing and proposed building, is being used to study the effect of upwind turbulence on the stability of airflow in the wind tunnel.

NASA Ames has long held an important role in developing and testing Entry, Descent and Landing (EDL) systems for both manned and unmanned spacecraft. Parachutes for the Mars rovers were tested in the wind tunnels at Ames and the Ames Arc Jet Complex has been used to test thermal protection for spacecraft from the era of Apollo to the current Orion program.

An Arc Jet is a device in which gases are heated and expanded to very high temperatures and supersonic/hypersonic speeds by a continuous electrical arc between two sets of electrodes. The gases (usually air) pass through a nozzle aimed at a test item in a vacuum and flow over it simulating the heat and pressure of atmospheric reentry. The complex has seven test bays, at present four bays contain arc jets of different configuration.

The Open House also included display about NASA Ames missions including the LADDE  lunar orbiter, the SOFIA flying observatory and the IRIS solar observing spacecraft. Ames contributions to science aboard the International Space Station (ISS) were also highlighted, including the SPHERES robotics experiments and four Space Biosciences experiments that were sent to the ISS on the most recent SpaceX launch.