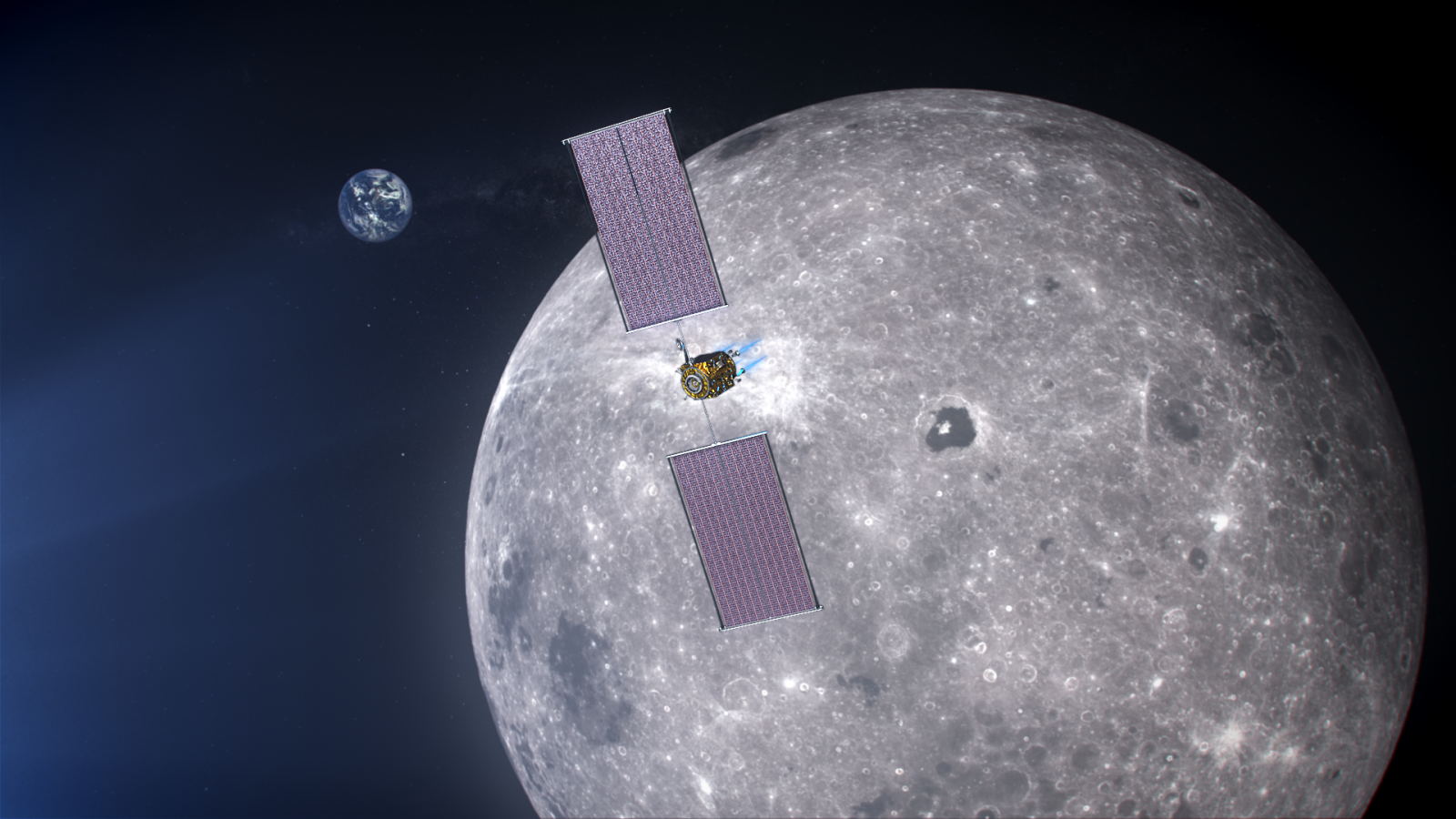 An illustration of the power and propulsion element of the Lunar Gateway, which is designed to be a reusable command module for astronauts in NASA’s Artemis Moon program. Image Credit: NASA

NASA awarded Maxar Technologies the contract for the first piece of the agency’s Lunar Gateway, which is designed to be a staging point for Moon-bound astronauts.

The contract for the power and propulsion element (PPE) was announced May 23, 2019, by NASA Administrator Jim Bridenstine during a visit to the Florida Institute of Technology in Melbourne, Florida. Aside from SLS and Orion, the PPE is the first major piece of NASA’s Artemis program architecture. 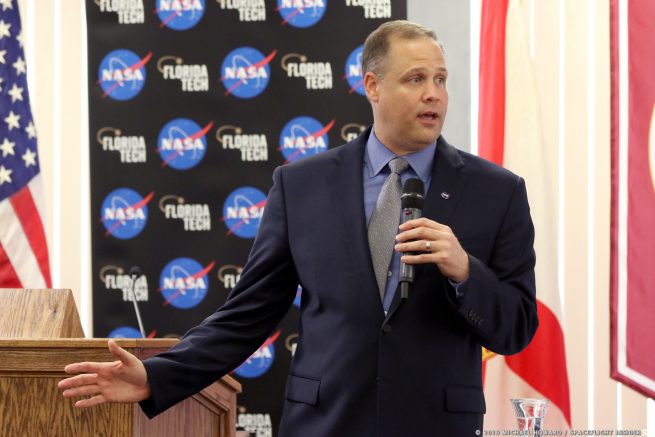 “The power and propulsion element is the foundation of Gateway and a fine example of how partnerships with U.S. companies can help expedite NASA’s return to the Moon with the first woman and next man by 2024,” said NASA Administrator Jim Bridenstine. “It will be the key component upon which we will build our lunar Gateway outpost, the cornerstone of NASA’s sustainable and reusable Artemis exploration architecture on and around the Moon.”

Designed to be a “reusable command module,” the Lunar Gateway is planned to be situated in a near-rectilinear halo orbit around the Moon, which is essentially a highly-elliptical orbit in cislunar space that allows for easy access to any point on the Moon’s surface.

It would also double as a place to assemble and refuel landing vehicles and to for astronauts to learn how to live in deep space for longer periods of time.

Partnering with Maxar Technologies is Blue Origin and Draper, which will support human-rating activities and navigation technologies, respectively.

While the Gateway is planned to encompass several elements, including those from international partner space agencies, the goal of landing astronauts at the south pole of the Moon by 2024 will only require two pieces. In addition to the PPE, a small utilization module, which would include docking ports and minimal habitable space, is all that is needed in the near term. 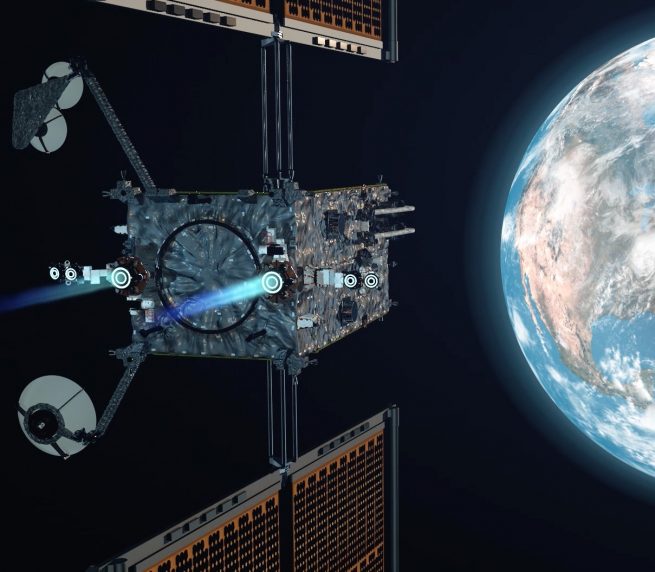 Maxar Technologies is using its 1300-class satellite platform to base its PPE. The requirements from NASA are for it to use a high-power, 50-kilowatt solar electric propulsion system. According to NASA, it should also provide communications, transportation, controls and power to future Gateway elements.

According to NASA, the agency is working with Maxar Technologies to incorporate it’s high-power solar electric propulsion technology.

“We’re excited to demonstrate our newest technology on the power and propulsion element. Solar electric propulsion is extremely efficient, making it perfect for the Gateway,” said Mike Barrett, power and propulsion element project manager at NASA’s Glenn Research Center in Cleveland. “This system requires much less propellant than traditional chemical systems, which will allow the Gateway to move more mass around the Moon, like a human landing system and large modules for living and working in orbit.”

According to Maxar Technologies, the solar power system will be based on the Roll Out Solar Array (ROSA), which is a “compact, modular and scalable” system that rolls up for launch rather than folding. This technology was tested aboard the International Space Station in 2017.

While still in the design phase, right now PPE is expected to have a 5,000 kilogram launch mass with roughly half of that being propellant. A rocket launch vehicle has not yet been chosen, but Maxar Technologies is designing the spacecraft to be able to launch on a variety of vehicles.

In total, the Maxar Technologies contract is a “firm-fixed price award” and carries a maximum total value of $375 million and begins with a 12-month base period where the spacecraft design is expected to be completed. 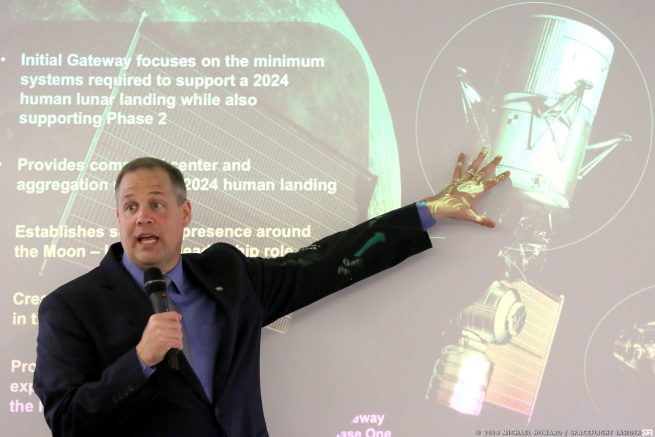 From there, NASA would have the option to “provide for the development, launch and in-space flight demonstration.”

It is targeted for launch atop a commercial rocket no earlier than 2022 and expected to have a service life of 15 years. However, Maxar Technologies must first operate the element for up to one year for a spaceflight demonstration before NASA acquires and purchases the vehicle.

“We are procuring that power and propulsion element of the Gateway in a way that we haven’t done before,” Bridenstine said. “We will have an option to take possession of it after it’s on orbit. In other words, we’re buying it commercially. They’re building it, then if it all tests well, the we acquire it.”

Bridenstine said NASA needs to get used to this alternative procurement method as he said this is an example of how the agency is expected to move forward with speed and urgency to the Moon.

The first of many steps

Under NASA’s Artemis program, the agency is directed to send astronauts to the Moon by 2024. It requires not only the completion of the long-delayed Space Launch System and Orion spacecraft, but the development of a new Exploration Upper Stage, an initial two-module Lunar Gateway, a three-stage commercial lunar lander as well as various surface equipment such as spacesuits.

While the PPE was in the budget for fiscal year 2019, NASA said it requires at least an additional $1.6 billion (on top of the $21 billion initially requested by the White House) in FY 2020 to jump start the development of lunar lander systems. 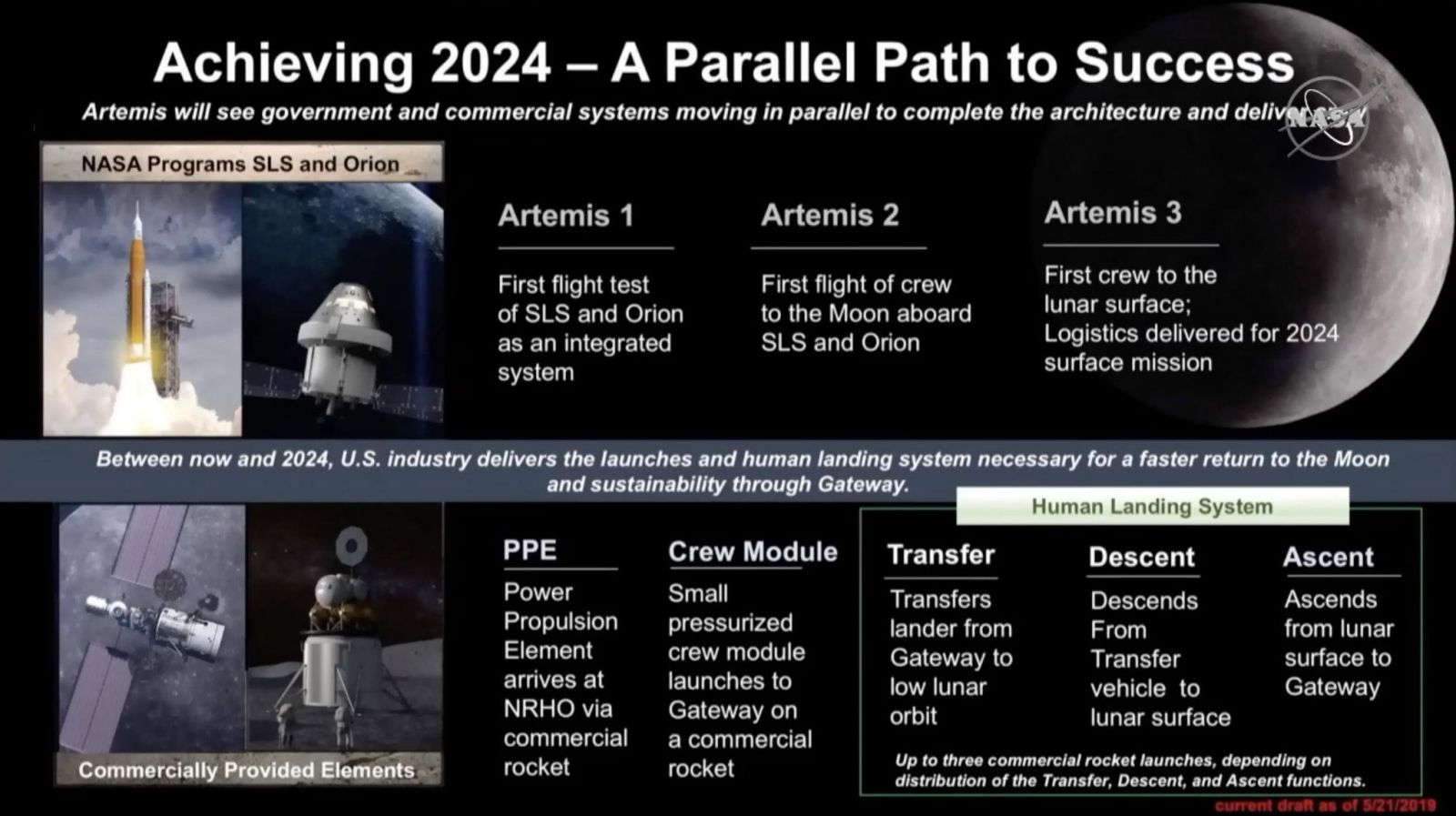 A NASA graphic showcasing the Artemis program during phase one between now and 2024. Image Credit: NASA

Assuming the required funding is granted by the U.S. Congress and the required hardware is built in time, the goal is fly three SLS missions with Orion by 2024 in parallel with assembling the Lunar Gateway and lunar lander.

Artemis 1, originally called Exploration Mission 1, is designed to be an uncrewed Orion flight around the Moon. It is targeting no earlier than late 2020.

The second flight, Artemis 2, is slated to launch by 2022. It would first involve testing critical Orion hardware, such as life support, in Earth orbit before performing a rocket engine burn to place the vehicle on a free-return trajectory around the Moon. Up to four astronauts are expected to fly aboard this mission. 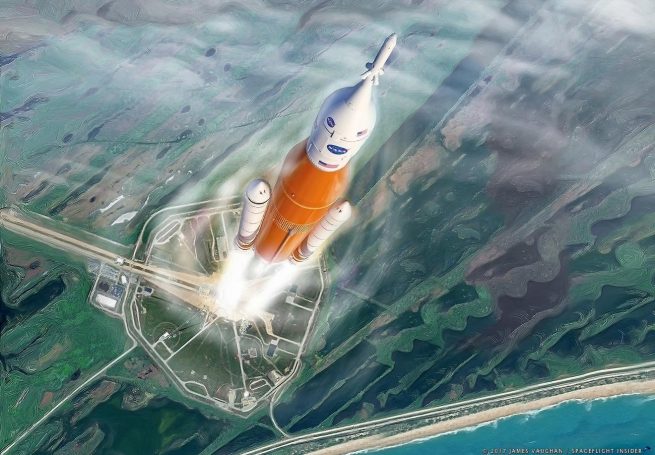 Finally, Artemis 3 is slated to launch with four people to the two-module Lunar Gateway in 2024. Waiting for the crew would be an already-assembled lunar lander system, which they would check out before using it to travel to the lunar surface.

Once the first landing happens, that would conclude the first of two phases for the Artemis program. The first phase is about speed and would culminate with the 2024 landing. During that time, numerous development projects are expected to occur in tandem, including the human landing system as well as various robotic missions.

Phase two begins the “sustainability” part of Artemis where more international partners would come aboard with various Gateway modules and reusable lander systems are tested, refueled and landed again. The beginnings of a lunar outpost could also begin by the end of phase two in 2028.

Additionally, also as part of Space Policy Directive 1, NASA would begin to utilize the resources already on the Moon, such as water ice, to purify water, create oxygen for breathing and hydrogen for fuel.

It is expected the skills and technologies learned as part of the Artemis program would be incorporated for an eventual human Mars mission sometime in the 2030s.

How close to this proposed platform is the Starlink system just placed in orbit by SpaceX? Could a Starlink group of satalittes be modified to link together and provide the propulsion platform — Now versus 2024.