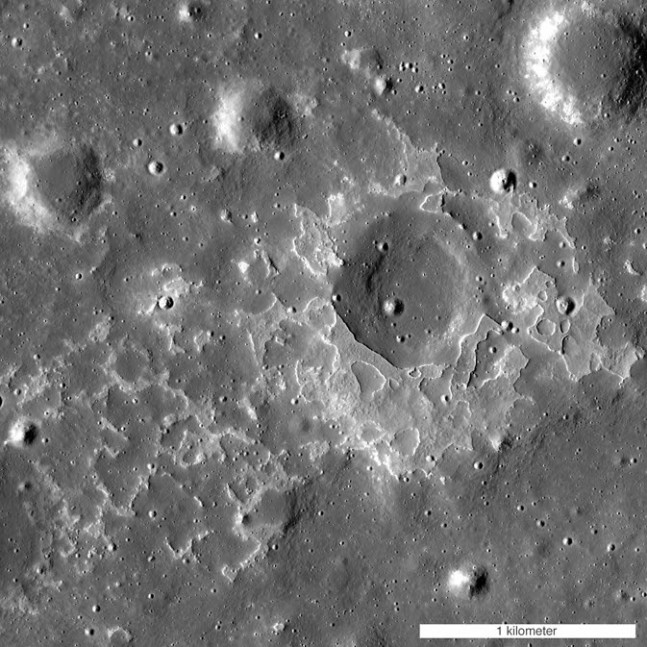 This feature, Maskelyne, is one of many newly discovered young volcanic deposits on the Moon. Image Credit: NASA Goddard

With the help of NASA’s Lunar Reconnaissance Orbiter (LRO), researchers now have evidence indicating that widespread lunar volcanic activity has gradually slowed over time, as opposed to suddenly stopping about a billion years ago. LRO determined, after observing certain rock formations, that these samples were under 100 million years old. This time frame is roughly equal to the Earth’s Cretaceous period — the glory days of the dinosaur age. Observations also showed other areas were under 50 million years old, an indication that lunar volcanic activity has indeed slowed over time.

John Keller, LRO project scientist at NASA’s Goddard Space Flight Center said, “This finding is the kind of science that is literally going to make geologists rewrite the textbooks about the Moon.”

The Moon’s terrain is a combination of different textures, including smooth, shallow mounds, and rough, blocky terrain. Terrestrial combinations, called irregular mare patches, are strewn across the Moon’s volcanic plains. These patches cannot be seen from Earth, due to their small size (approximately 1640 feet). One of the largest mares, Ina, is a well-studied area and was imaged by Apollo 15 astronauts from lunar orbit.

At first, Ina was thought to be a unique area. This was before researchers from Arizona State University in Tempe and Westfälische Wilhelms-Universität Münster in Germany were able to identify approximately 70 other mares, with the help of the LRO’s high-resolution images taken by the Lunar Reconnaissance Orbiter Camera (LROC ). The large numbers of these mares and their distribution across the lunar surface are evidence of the fact that late-stage volcanic activity is an important part of lunar geologic history. The amount and size of the craters within these regions signify that the deposits are recent. By using a technique that connects crater measurements to the samples of the Apollo era, researchers determined that three of these mare patches are under 100 million years old, and Ina is less than 50 million years old. These areas contain steep slopes transitioning from smooth rocks to rougher terrain, both consistent with the estimated ages.

“The existence and age of the irregular mare patches tell us that the lunar mantle had to remain hot enough to provide magma for the small-volume eruptions that created these unusual young features,” said Sarah Braden, a recent Arizona State University graduate and the lead author of the study.

WOW! Finally an agreement over current active geologic state of the Moon!!!!
We congratulate the authors of this recent article for finding many more sites on the Moon showing signs of young volcanism.
These findings are great but we have already been saying this for long. Refer to the articles given below
http://www.currentscience.ac.in/Volumes/107/03/0454.pdf
http://www.sciencedirect.com/science/article/pii/S0032063313002286
http://sciencythoughts.blogspot.in/2014/06/a-recent-volcanic-lava-flow-in-lowell.html
http://link.springer.com/article/10.1186%2Fs40562-014-0011-y#page-1

One more thing, the idea of recent basaltic volcanism on the Moon was first presented at an international meeting in India. Please find the abstract at https://www.researchgate.net/publication/266912741_IS_THE_MOON_STILL_ACTIVE