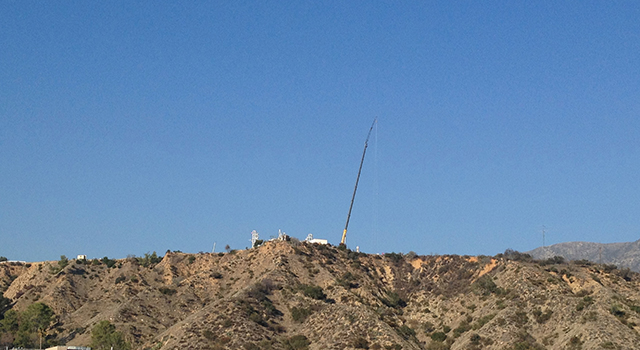 A 300-foot crane is being used to test components of NASA's Low Density Supersonic Decelerator (LDSD) project, a challenging technology to enable a future mission to Mars or other planetary bodies that uses heavier spacecraft and lands at locations that were previously not achievable. Image Credit: NASA/JPL-Caltech

A giant crane will tower above NASA’s Jet Propulsion Laboratory in Pasadena, Calif., shooting out of a hilly mesa like an oversized erector set, ready to help test components of NASA’s Low Density Supersonic Decelerator (LDSD) project. The goal of the challenging technology, led by JPL, is to enable a future mission to Mars or other planetary bodies that uses heavier spacecraft and lands them at locations that were previously not achievable.

The crane-test is scheduled for tomorrow, Dec. 18, weather permitting. The test will simulate the acceleration of a large parachute being pulled away from a spacecraft. The purpose of the test is to show that all of the parachute lines and bridles come out in an organized manner and do not catch on other vehicle hardware as they are deployed.

Validation tests are crucial to working out the kinks before a system of this type is used for future space missions. During this test, the parachute, which has a diameter of roughly 100 feet (30.5 meters), will not open. Its size is a significant upgrade by comparison to parachutes that have come before it. For instance, last year’s successful landing of NASA’s Mars Curiosity Rover utilized a parachute that measured only 51 feet (15.5 meters) across, about half the size.

The heavier planetary landers of the future require much larger drag devices than any now in use to slow them down — and those next-generation drag devices will need to be deployed at higher supersonic speeds to safely land a vehicle, plus crew and cargo for potential human missions.

Current Mars landing techniques date back to NASA’s Viking mission, which put two landers on Mars in 1976. That mission’s basic parachute design has been in use ever since, with additional landing technologies, and was used again in 2012 to deliver the Curiosity rover to Mars. To conduct more massive exploration missions in the future, however, NASA must advance the technology to a new level of sophistication.

Testing for the LDSD project began in 2012 at the U.S. Navy’s China Lake Naval Air Weapons Station in California and will be conducted through 2015.

In the next few years, the Low Density Supersonic Decelerator Technology Demonstration Mission will conduct full-scale, stratospheric tests of these breakthrough technologies high above Earth to prove their value for future space exploration missions.

More information about LDSD is at: http://www.nasa.gov/mission_pages/tdm/ldsd/#.UqsZZGRDt9k