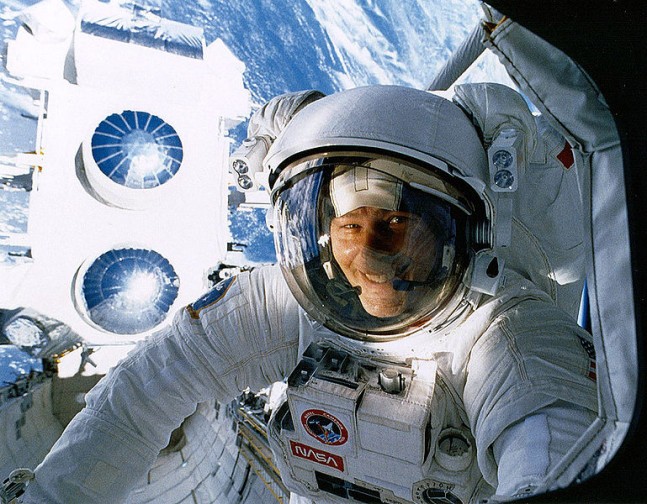 After the Mercury, Gemini, and Apollo programs ended, the public pretty much lost track of who was who in the astronaut corps. The shuttle program was amazing, but with frequent missions and seven astronauts going up at once, there have been too many for people to know or remember.  By the end of the Shuttle program, two astronauts, Drs. Jerry Ross and Franklin Chang-Diaz, gained the distinction of being seven-time Space Shuttle frequent flyers. With Ross poised to enter the U.S. Astronaut Hall of Fame, we’d like to share a recent interview with him.

The Explorers Club’s Director, Jim Clash, interviewed Dr. Ross for his “Exploring Legends” series at the club’s New York City headquarters just a few months ago. Dr. Ross shared his experiences and anecdotes, which included beautiful descriptions of the Earth from space, somber stories of Columbia, and some uproariously funny moments. Dr. Ross applied to the first class of astronauts to do so under the space shuttle era (there were some 10,000 applicants) and came very close to being selected. But, like all good things, he would have to wait.

He settled in Houston, and served as an Air Force officer helping to integrate military payloads to the shuttle. After a year and a half, he successfully applied  for the next round of selections to become one of 19 astronauts selected from a pool of 6,000.

Out of the eight times Ross “sat on top of the fuel,” he flew on seven successful missions (one was aborted). At one time his crew was assigned to the fateful Challenger STS-51L mission, but those plans were changed. Some of Ross’ friends were amongst the Challenger crew members.

After the Challenger disaster came the big decision about Ross’ own future career as an astronaut. He talked with his wife and children and they all agreed that it would not be good for the future of our country’s space program for all of the astronauts to quit. Dr. Ross stayed with the program, dedicating himself to supporting the fallen astronauts’ families and making the shuttle safer for future flights.

On whether or not launching into space gets old: Ross roared to orbit seven times during the space shuttle era. He retired from NASA in 2012. Photo Credit: NASA

“I felt like a kid in a candy shop on all my flights… Literally, on my seventh flight, I still felt just as alive and excited about flying in space, and the preparations for it, as I did on the first one…  I never took it for granted and I always felt that the knowledge I had up here (pointing to his head) was going to help the crew and myself come home, and to be that much more capable in making sure that the mission was successful.”

The view from space:

“It’s unfortunate that they send engineers who can’t describe things in good words, but I would have to tell you that I don’t think a writer or a poet or an artist would do much better. We’ve had several artists in space, astronauts who had quite decent artistic skills, and they have tried to capture that in paintings and sketches.

The best way I can describe it is if you can take every picture that you’ve ever taken of a beautiful sunrise or a beautiful sunset, or a beautiful flower garden, or mountains at sunrise, or a baby in a cradle, or a bride as she’s all ready to go walk down the aisle, rainbows, whatever it is – every beautiful picture that you’ve looked at in a magazine or you’ve taken by yourself and go, ‘Wow, that’s beautiful!’ Take those pictures and glue them side by side on a long roll. Now roll that thing up, and speed it past your eyes pretty quickly, and you’re trying to capture a glimpse of each of those and go ‘Wow! Wow! Wow!’

In every sunrise and sunset you see multiple layers like a torch of color. And each one of those layers is distinct, and it’s a different color, and they’re just beautiful, and they’re changing continually because you’re going around the world at 5 miles a second and the sun is either rising or lowering itself with respect to the horizon, continuously.”

“He was incredibly talented, thoughtful…Many people thought that he was reclusive, that he was not friendly. He was a very warm person, and he was a very fun person to be around, but he did not like the limelight, he did not like the fact that he was famous because of what he got to do and what he endeavored to do throughout his career. But at the same time, he did have a great sense of humor and he was a lot of fun to be around once you got to know him.”

End of the shuttle era:

Dr. Ross was pleased with the close of the shuttle program, as plans were to replace it with Constellation. The Constellation was going to have a new capsule – a safer way to get there and back – and larger rockets, which could take us to the Moon and Mars. The government did not approve funding in time. The schedule slipped, and cost grew, and the plans for Constellation were scrapped. 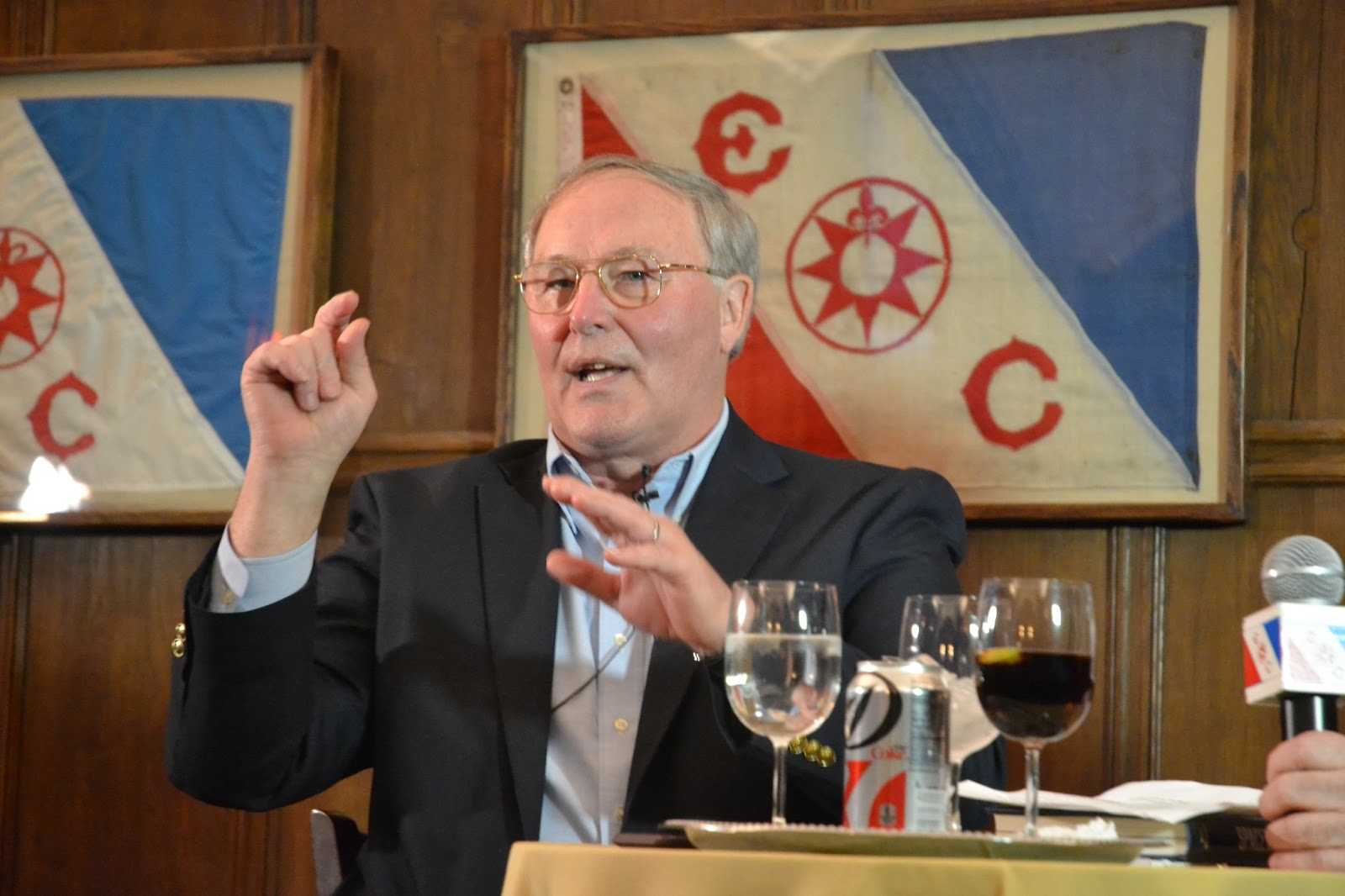 “Right now we are in a quagmire of nowhere. We don’t have a good plan, we don’t know what we want to do, we don’t know when we’re going to do it, and it’s very, very frustrating.” Photo Credit: Stacey Severn

“Commercial crew is a bogus term, because 85 percent or more of the money that’s being used by the contractors to build their vehicles comes from the NASA budget.  None of them have a viable business plan that says that they can make ends meet and make a profit unless NASA is the prime user of their vehicle and pays them very well for what they’re going to do for us, potentially. And because we’re giving them all that money, that drains the money out of the NASA pocket to be able to continue building our programs at the pace that we want to do. It’s very frustrating.”

Despite frustration with the current state of NASA, Dr. Ross expressed that if he was offered a ride in the Soyuz tomorrow, he’d be ready.

Directly to Mars or to the Moon first?

Dr. Ross stated a belief that it is part of our destiny that humans step foot on Mars, and it’s just a matter of time before we do:

“I am of the camp that we need to go to the Moon first. It’s three days away, it’s not nine months away under current technologies. There are a lot of things we need to further develop and understand and be capable of doing before we commit to the Mars mission. We need to understand how to use the water ice on the moon to manufacture water that we can drink, bathe with, use to make our meals, that we might be able to grow crops with, that we might ultimately use to manufacture other things including rocket fuels, and maybe even use the gaseous oxygen and hydrogen to make electric power. A lot of reasons to go up there to understand how you can live for longer periods of time on foreign bodies. A lot of it has to do with just frankly being able to design and make systems that will last for extremely long periods of times with minimal maintenance, minimal spare parts, low energy levels, and will require minimal crew involvement in terms of the time to maintain them and keep them going. So I’m of the camp that we ought to go to the moon and develop those capabilities, and as soon as we think we’ve got them ready, then we ought to press off toward Mars.” Although Ross was pleased that the shuttle program has ended, he expressed concern and doubt about the current direction that NASA is on. Photo Credit: Jason Rhian / SpaceFlight Insider

When asked if he thinks the first person to go to Mars has already been born, Dr. Ross said he certainly hopes so. He also pointed out that the first Mars mission does not have to be to the Red Planet itself. Going to one of the moons of Mars would be easier in a lot of ways, taking a lot less energy to travel to and away from them.

The conversation continued about Mars, propulsion, and then turned back to Columbia. Dr. Ross’ recollections were detailed and poignant, and left many with moist eyes. Clash decided to end the interview on a lighter note, one which had everyone in attendance laughing:

Clash: Everybody wants to know, has anybody had sex in space?

Clash: I do, I’m not saying personal experience…

Ross:  “None to my knowledge. If you’ve seen the interior of the Space Shuttle there isn’t a whole lot of room in there!”

To read more of Dr. Ross’ first-had account of being a NASA frequent flyer, read his book, “Spacewalker: My Journey in Space and Faith as NASA’s Record-Setting Frequent Flyer.”

Hi Ben, Thank you so much for your comments, and thank you for asking that question. In my draft, I mistakenly typed “Columbia” instead of “Challenger,” and in the editing process, the mission number was added. I’ve made the correction, and thank you for bringing this to my attention!

Thank you for following spaceflightinsider.com.

Here is the direct quote from the interview (from my recording):

“You might be interested to know that at one time my crew was assigned to the Challenger flight. Assignments moved around and we moved back off of that mission. I flew two flights before Challenger and the second flight after Challenger. I was already assigned to my second mission before I flew my first mission.“

Ross was out in New Mexico training for that second mission when the disaster occurred.