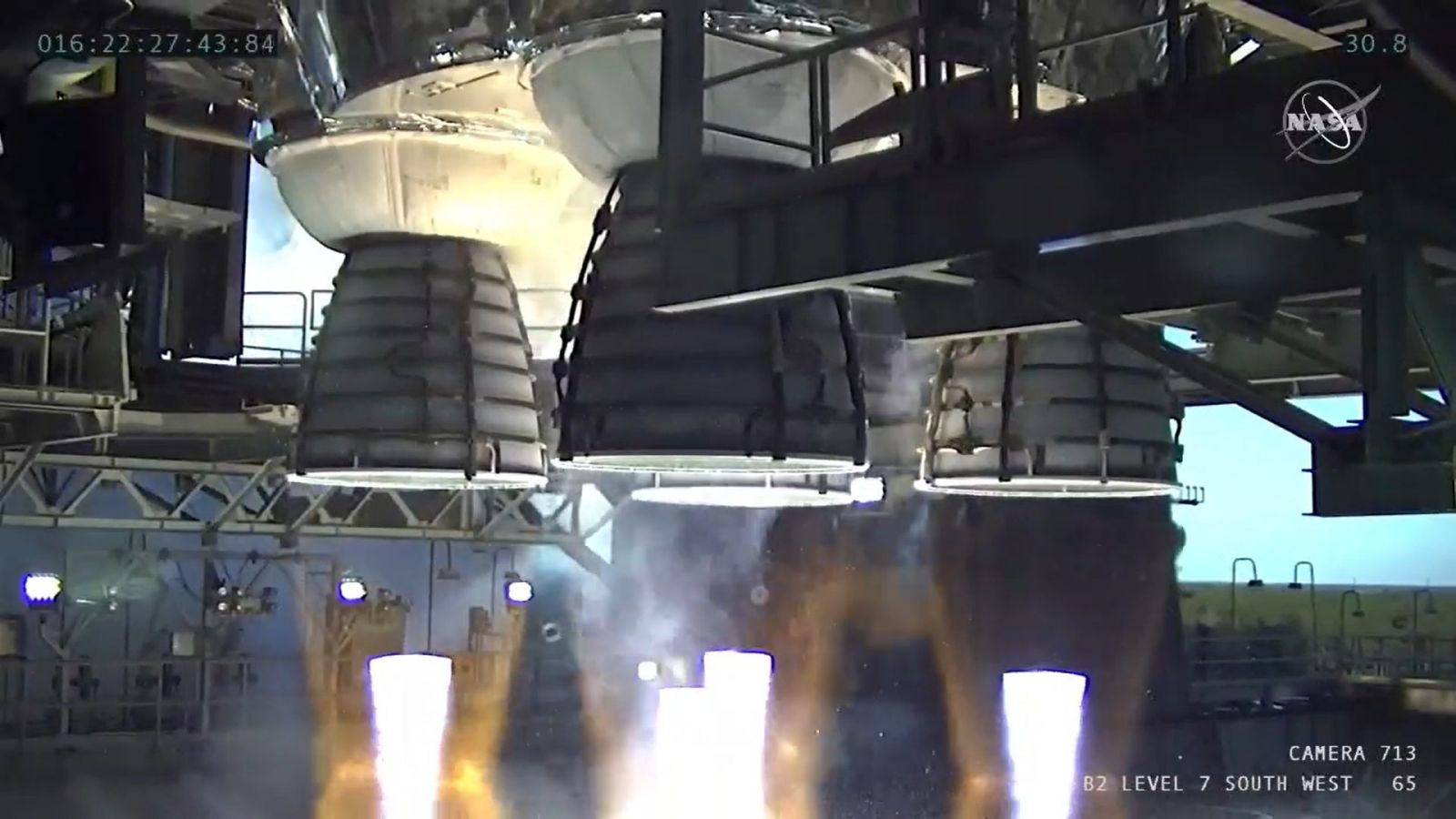 The four RS-25 engines in the SLS Core Stage fired for a little more than one minute During the Green Run test, and generated 1.6 million pounds of thrust. Image: NASA Television

For the first time, NASA fired up the core stage for its Space Launch System rocket, which is designed to send humans into deep space. However, an anomaly prompted the engines to shut down much earlier than planned.

The SLS rocket came to life at 5:27 p.m. EST Jan. 16, 2021, on the B-2 test stand at NASA’s John C Stennis Space Center in Mississippi. It was the first time its four RS-25 engines were fired at the same time, producing around 1.6 million pounds of thrust. However, about a minute into the planned 8-minute test, the computer shut down the engines. 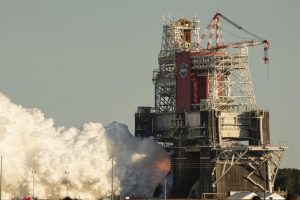 “Saturday’s test was an important step forward to ensure that the core stage of the SLS rocket is ready for the Artemis I mission, and to carry crew on future missions,” said NASA Administrator Jim Bridenstine, during a post-test press conference. “Although the engines did not fire for the full duration, the team successfully worked through the countdown, ignited the engines, and gained valuable data to inform our path forward.”

According to John Honeycutt, the SLS program manager, there was a “failure identification” indicated by the computer about a minute into the test, followed shortly after by a “major component failure” indicator for engine No. 4. Honeycutt also stated it was right about that time the team noticed a flash around the thermal protection blankets protecting the engines. Honeycutt however, stressed that the test teams are still poring over the data and at this point it is unknown what exactly caused the shut down.

A few seconds following the anomaly detection, the engine’s computer initiated a shutdown, sending a signal to the core stage computers, triggering an abort sequence which also caused the other three engines to shut down as well. Visually, all four engines appeared to be normal, aside from the early shut down.

According to Bridenstine, depending on what the data shows, there are several possibilities for the next steps moving forward. One possibility would be that the hot fire is attempted again. According to Honeycutt, it would be at least 21-30 days to prepare the RS-25 engines for another test, with Stennis Center Director Dr. Richard J. Gilbrech adding that Stennis can be made ready in 3-5 days with fuels replenishment. Both Bridenstine and Honeycutt also stated that any next step would only be decided after the teams go over the data to understand what caused the early shut down, and how the stage performed overall.

If the issue turns out to be minimal, Bridenstine stated its possible another hot fire isn’t needed, and the core could be shipped to Kennedy Space Center in Florida for stacking in advance of the first SLS flight, the uncrewed Artemis I mission, currently targeting a launch date no earlier than November 2021. 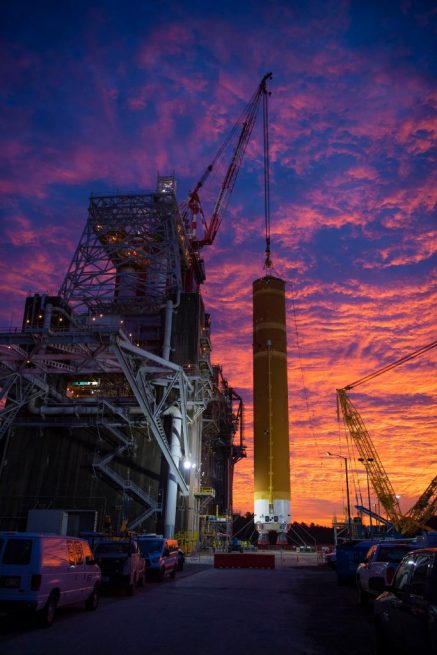 The SLS Core stage for Artemis I is lifted onto the test stand at NASA Stennis in January 2020. Image: NASA

The goal of the hot fire was for all four engines to burn for a full flight duration of eight minutes. However, at a minimum, teams hoped for about 250 seconds of data. That would have given engineers data on the engines throttling down to 95% from 109%, and then back to 109%, as well as gimbaling the engines. It’s unclear if the roughly 60 seconds of testing time will be enough to proceed without a second test.

Either way, this test is the last major milestone in the long road toward getting the first SLS rocket to the launch pad for the uncrewed Artemis I mission. Artemis I is slated to see an uncrewed Orion spacecraft sent on a near month-long flight to the Moon, before returning to Earth. It is expected to set the stage for the crewed Artemis II mission, which is aiming to send three NASA astronauts, and a Canadian astronaut, on a free-return flight around the Moon sometime in 2023, much like Apollo 8.

While every other component for the Artemis 1 mission is at Kennedy Space Center, the core stage for the SLS rocket, with its four RS-25 engines, remains at Stennis where it has been for about a year undergoing a series of “Green Run” tests. A total of eight tests are involved in the Green Run, which was to culminate with all four RS-25 engines firing for up to about eight minutes.

The core of the Space Launch System, built by Boeing, is 65 meters long and 8.4 meters wide. Its four Aerojet Rocketdyne RS-25 engines consume liquid hydrogen and liquid oxygen to produce nearly 7,500 kilonewtons, about 1.6 million pounds, of thrust at liftoff.

It’s been a long road, getting from there to here

While SLS has officially been in development since fiscal year 2012, it is actually a reincarnation of the Ares 5 rocket, which began development during the Bush administration in 2005 as part of the Constellation program. While the Ares 5 didn’t progress very far in its development, major components, such as five-segment solid rocket booster did see successful static fire tests. The Mobile Launcher was also built for constellation, and ultimately received significant modification to support SLS.

Ultimately, Constellation was canceled by the Obama administration in 2010. Under a new “flexible path” to deep space destinations, such as an asteroid or Mars, the crewed Orion spacecraft, also from the Constellation program, continued to receive funding for development. Additionally, the U.S. Congress would revive the shuttle-derived heavy-lift booster project under the name Space Launch System, which started receiving funding during fiscal year 2012 with an anticipated first flight by 2017.

Under this new plan, there would be multiple variants of the mega rocket. Block 1, Block 1B and Block 2. All three would be powered by the same core stage design. 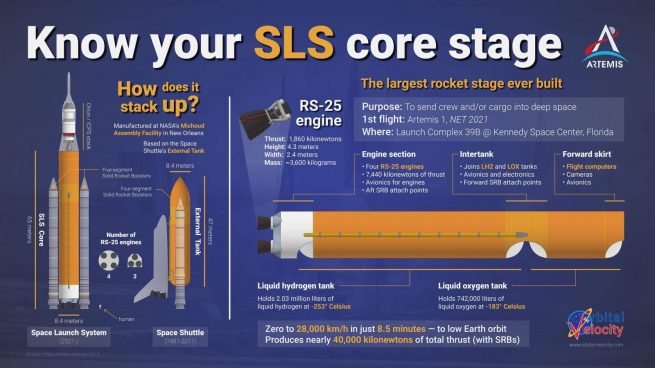 Block 1 is to have two five-segment SRBs as well as an Interim Cryogenic Propulsion Stage, or ICPS, powered by a single RL10B-2 engine. This variant is expected to be able to loft 95 metric tons to Low Earth Orbit, or 26 metric tons on a trans-lunar trajectory. Artemis I through Artemis III are expected to utilize the Block 1 variant.

Block 1B would see the ICPS replaced by a more-powerful Exploration Upper Stage, powered by four RL10-C3 engines. As such, this version would be able to send about 105 metric tons to Low Earth Orbit and about 40 metric tons on a Trans-Lunar trajectory. Block 1B is currently thought to fly for the first time during the Artemis IV mission, likely no earlier than 2026.

Block 2, should the program advance to this stage, would see the current five-segment SRB design replaced by “advanced boosters” to increase the vehicles lift capacity enough to send 130 metric tons to Low Earth Orbit and 45 metric tons toward the Moon.

Throughout the years, numerous issues, both technical and financial, have caused years worth of delays. Under the Obama administration, the goal was to send astronauts to an asteroid using the SLS and Orion systems. However, when the Trump administration began, the hardware was again redirected to send astronauts to the Moon. In 2019, the Trump administration announced it would be accelerating the Moon program, which would soon be named Artemis, with the goal of landing the first woman and next man on the lunar surface by 2024. This was an ambitious, if not impossible target.

Regardless, the new target forced Boeing and NASA to do what it could to accelerate the development of the SLS rocket. The first flight article, Core-1, was completed in late 2019 at NASA’s Michoud Assembly Facility in New Orleans. In early 2020, Core-1 was barged to the Stennis Space Center in Mississippi and placed on the massive B-2 test stand, where it remains to this day. Throughout 2020, seven of eight Green Run tests were performed on the stage in the lead up to today’s first hot fire. While the hot fire test was supposed to happen in 2020, various issues, including the pandemic, and multiple hurricanes, caused delays.

“Seeing all four engines ignite for the first time during the core stage hot fire test was a big milestone for the Space Launch System team” Honeycutt said. “We will analyze the data, and what we learned from today’s test will help us plan the right path forward for verifying this new core stage is ready for flight on the Artemis I mission.”

If the SLS core isn’t shipped to the Kennedy Space Center soon, it’ll become increasingly difficult for the agency to launch the uncrewed Artemis I mission by the end of the year. In fact, since the agency has begun stacking the twin five-segment solid rocket boosters, there is actually a one-year time limit, the result of projected molecular decay in the fuel, before the boosters would need to be re-evaluated for an extension, or perhaps even replaced altogether, causing even further delays.