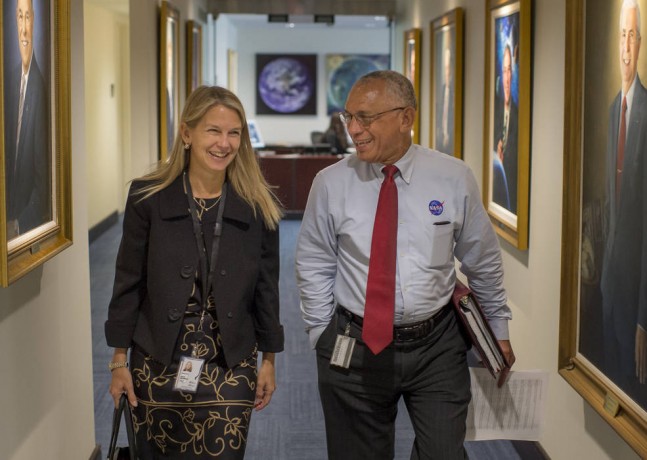 Dava Newman began her official duties as NASA’s new deputy administrator on Monday, May 18, at the agency’s headquarters in Washington, D.C. The deputy administrator position has been vacant since Lori Garver left NASA in September 2013. Newman was nominated by President Obama in January, confirmed by the Senate in April, and sworn in on Friday, May 15.

“I have known and admired Dava for several decades,” said NASA Administrator Charles Bolden. “Her talents and skills as an educator and technological innovator will bring a new energy to our NASA leadership team, and I’m ecstatic to have her on board.”

Newman is responsible to the NASA administrator for providing leadership, planning, and policy direction for the agency. Newman will perform duties delegated by the administrator and act for him in his absence. Newman is also responsible for representing NASA to the Office of the President, Congress, heads of government agencies and international organizations, and articulating the agency’s vision.

“I’m very excited to be at NASA,” Newman said. “I’m looking forward to being a part of the agency’s work to expand humanity’s reach into space, advance our journey to Mars and strengthen America’s leadership here at home.”

Before joining NASA, Newman was the Apollo Program Professor of Astronautics at the Massachusetts Institute of Technology (MIT) in Cambridge. Her expertise is in the multidisciplinary field of aerospace biomedical engineering. Newman is probably best known for her role in the development of the MIT BioSuit, an experimental skintight spacesuit that offers improved mobility and decreased mass in comparison to conventional gas-pressurized space suits.

Hi Dava,Very impressive,I have been an inventor for the last 35yrs being invoved with Heavy mining machinery,heavy haulage,robotics ,industrial and for personal use,supersonic power source produces electrical energy and atmospheric water.fully computerised algae production,microwave toilets for the poor.Non radioactive Atomic hydrogen reactor replaces nuclear reactors.Nano cooker for the poor.New electric waste vehicles with triple side robot travels 1000kms before recharge.
backhoe/excavator bucket changes size from 300-600mm with the push of a button,Development of hydrogen cells 18yrs.meeting up with gilmour persons today.Would love to meet up with Dava to discuss our Atomic Hydrogen Reactor.