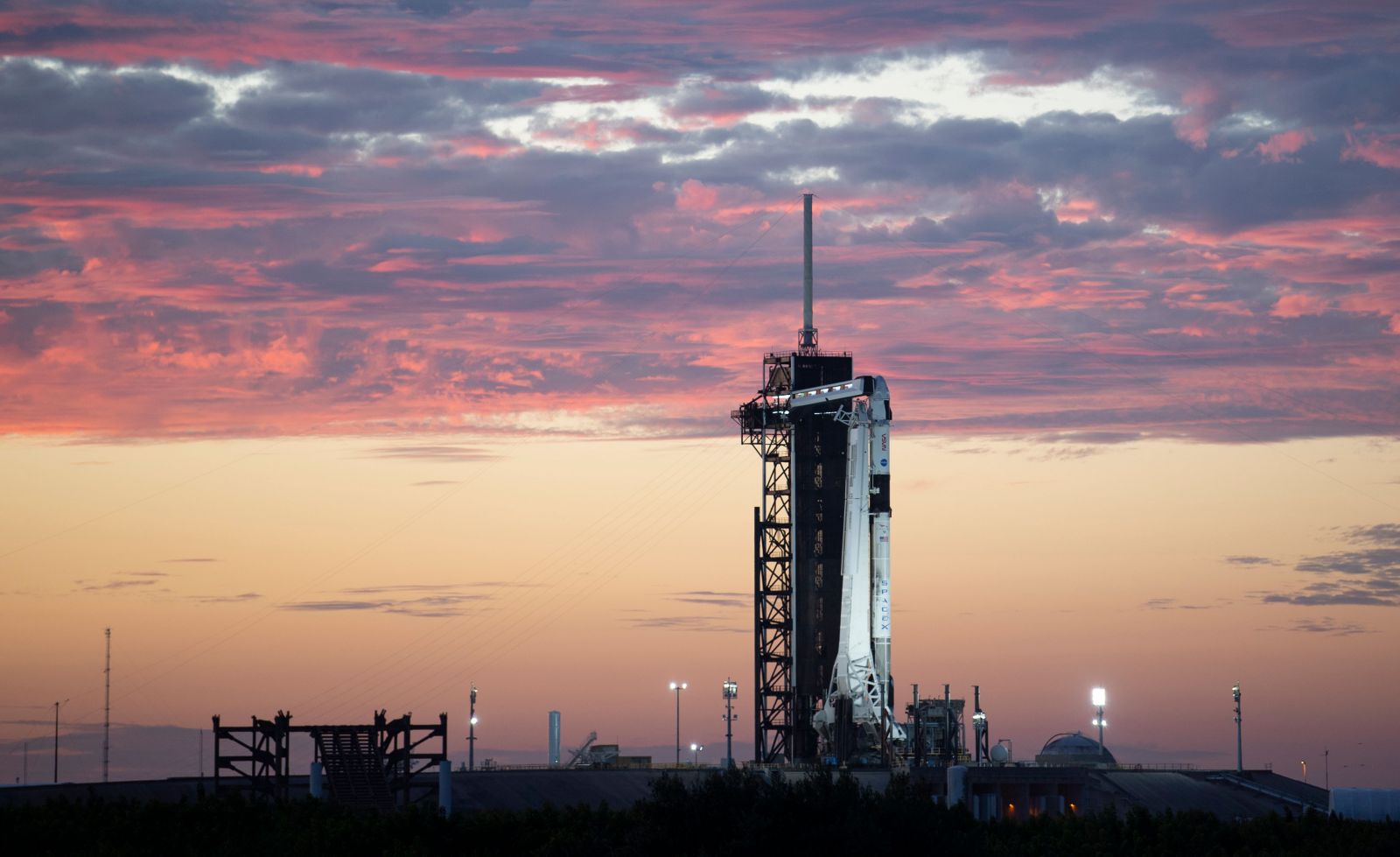 A Falcon 9 with the Crew-3 Dragon on top stands at Launch Complex 39A at NASA’s Kennedy Space Center in Florida. Credit: NASA 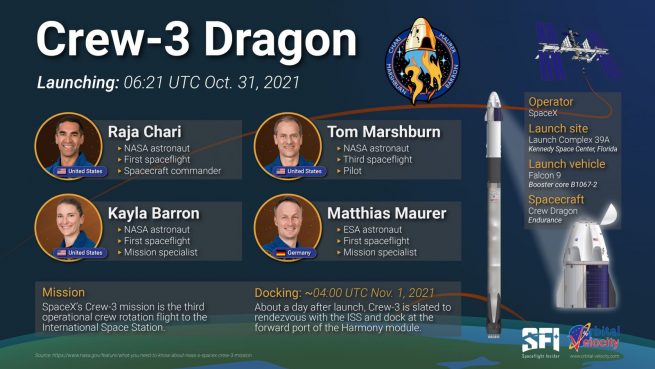 Chari is serving as the spacecraft’s commander while Marshburn is designated as the pilot. Barron and Maurer are both designated as mission specialists.

Only Marshburn has flown in space before. This will be his third foray into the black. His other two flights were aboard space shuttle Endeavour for mission STS-127 in July 2009 and aboard Soyuz TMA-07M as a member of ISS Expedition 34 between December 2012 and May 2013. In total, he has spent 161 days, 7 hours and 4 minutes in space.

Over the crew’s roughly six-month stay aboard the International Space Station, they are expected to perform about 350 experiments, according to Kathy Leuders, NASA’s associate director for the agency’s Space Operations Mission Directorate. This including research in material science, life sciences and tech demonstrations that will support NASA’s goal to return humans to the Moon in the coming years.

It also includes the testing of medical devices. Mashburn said he will be exercising a particular medical instrument that has a sensor to help determine how muscles atrophy in space. The instrument can also be used on Earth in other applications such as in hospital intensive care units or out in the field. 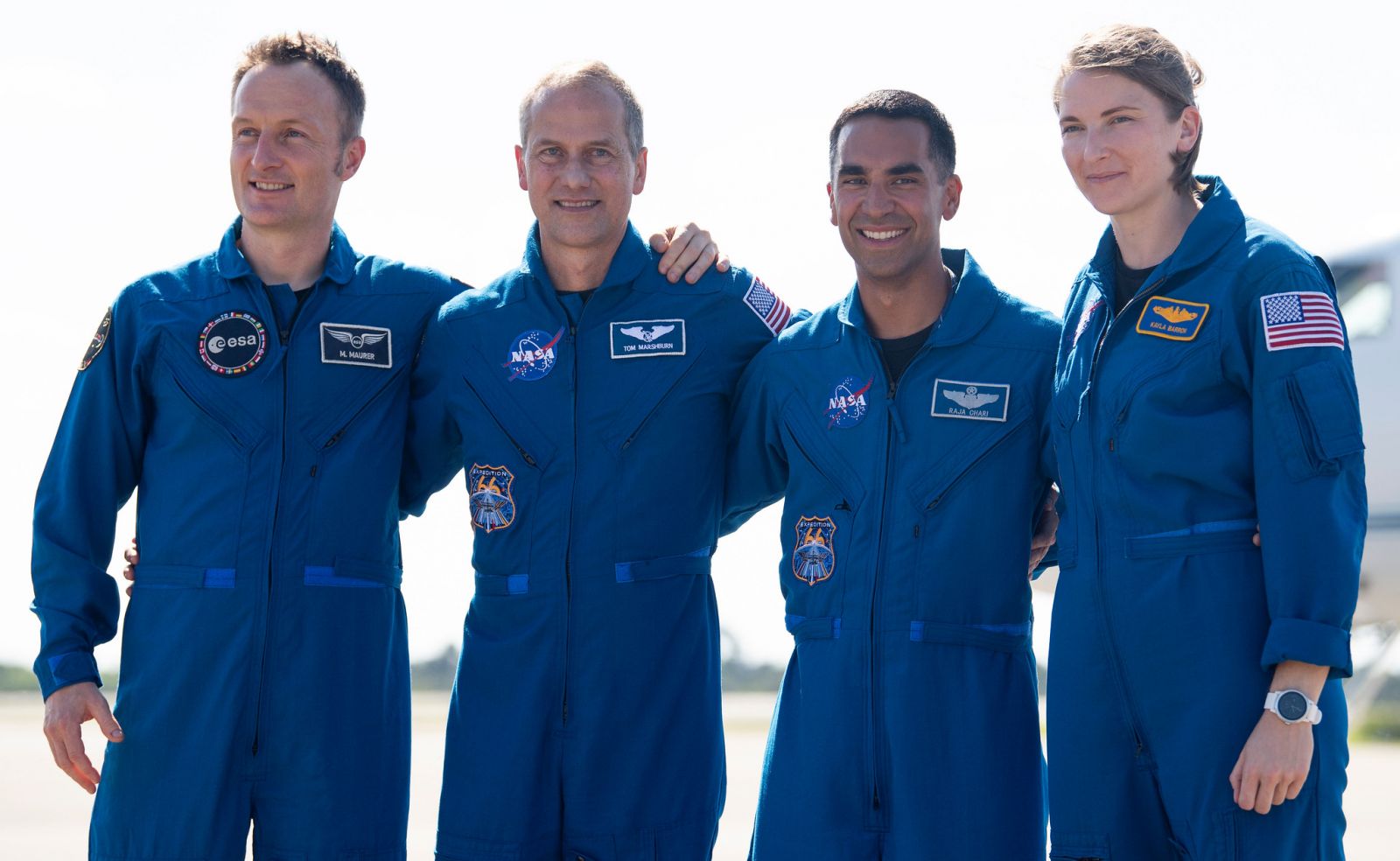 The Crew-3 astronauts shortly after their arrival at Kennedy Space Center on Oct. 26 in preparation for their launch. From left to right: European Space Agency astronaut Matthias Maurer and NASA astronauts Tom Marshburn, Raja Chari and Kayla Barron. Credit: NASA

When Crew-3 arrives at the space station roughly a day later, they’ll join with the astronauts and cosmonauts of Expedition 66 already aboard the orbiting laboratory. When Endurance docks with the forward port of the Harmony module at roughly midnight Nov. 1 (04:00 UTC), the population of the ISS will expand temporarily to 11 people.

That will only be for several days, however, as the Crew-3 astronauts are replacing the Crew-2 astronauts who have been aboard the ISS since April. Crew-2 consists of NASA astronauts Shane Kimbrough and Megan McArthur, Japanese astronaut Akihiko Hoshide and European Space Agency astronaut Thomas Pesquet. 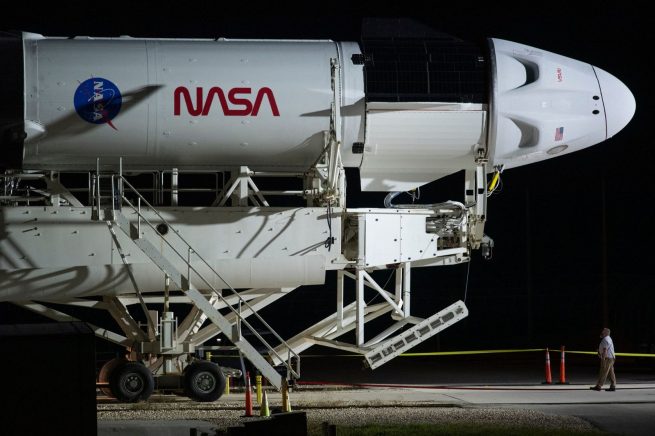 Crew Dragon and its Falcon 9 are rolled out of SpaceX’s hangar at Launch Complex 39A. Credit: NASA

Crew-2 is expected to return as early as Nov. 4. In addition to the Crew-3 astronauts, they’ll leave behind Russian cosmonauts Anton Shkaplerov and Pyotr Dubrov and NASA astronaut Mark Vande Hei, the three of which will return in Soyuz MS-19 in March 2022.

Over the course of Expedition 66, two private missions are expected to visit the outpost. The first is to be in early December when Soyuz MS-20 launches Japanese billionaire Yusaku Maezawa and his video producer, Yozo Hirano. They’ll both be accompanied by a professional cosmonaut — Alexander Misurkin.

Then in February 2022, Axiom Mission 1 is expected to fly Crew Dragon Resilience to the ISS with three tourists and a professional astronaut that is also a former NASA astronaut.

The Axiom Mission 1 flight is expected to remain docked at the space station for about eight days.

For the Crew-3 mission, this is the first flight of Crew Dragon Endurance, the fifth crewed SpaceX mission, the fourth operational Crew Dragon mission and the third crewed mission using a flight-proven Falcon 9 first stage.