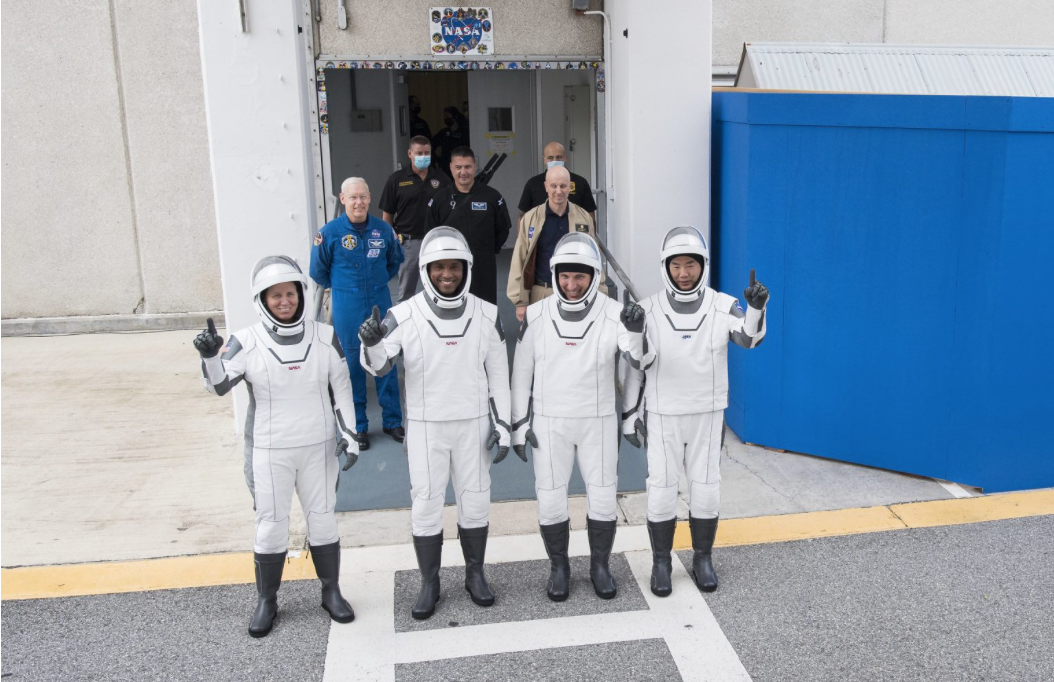 The crew completed a major pre-launch milestone today, executing a full dress rehearsal from start of flight day operations through to the Launch Director calling for the GO/NO-GO poll to begin fueling. By performing such an in-depth test, all teams involved in the mission were able to validate the readiness of their systems and personnel. 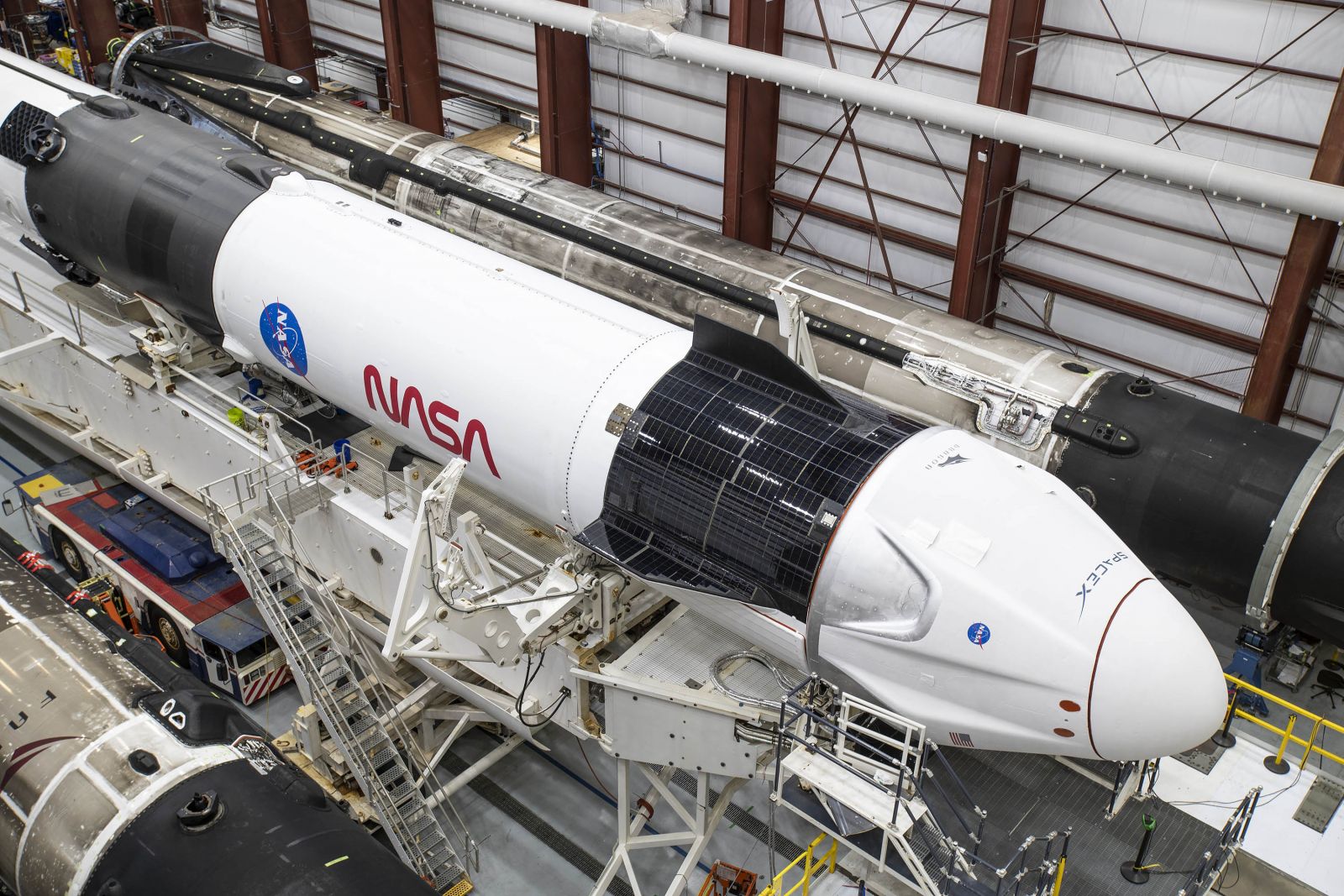 A SpaceX Falcon 9 rocket and Crew Dragon Resilience for NASA SpaceX’s Crew-1 mission are seen inside the SpaceX Hangar at NASA’s Kennedy Space Center in Florida on Nov. 9, 2020, before rollout to Launch Pad 39A. Credit: SpaceX

The two-stage SpaceX Falcon 9 rocket which will carry Crew-1 to space was initially scheduled to take to the skies Saturday evening, but was shifted 24 hours back to Sunday, November 15, 2020 due to offshore weather conditions. When it does fly at approximately 7:27 p.m. EST (12:27 a.m. +1 UTC), it will mark the beginning of the first operational mission of the SpaceX Crew Dragon spacecraft following its human rating certification. “Resilience”, as it has been named, will be the second Crew Dragon to carry personnel to the International Space Station, the first having been named “Endeavour”, which launched as part of the Demo-2 mission on May 30, 2020.

While weather has been a concern in the weeks and days leading up to this weekend’s launch, it did not stop the SpaceX teams at the Cape from preparing and rolling the launch vehicle out to Kennedy Space Center’s historic pad Launch Complex 39A. Following its November 9 arrival at the pad, the Falcon 9 was moved to the vertical position and was successfully static-fired on Wednesday, November 11.

The importance of a static fire test, which sees all 9 main Merlin engines briefly ignited and brought up to power while the rocket remains held down at the pad, is that it ensures that all firing systems and engines themselves are functioning nominally and as expected. This is of particular importance just now, as SpaceX confirms correct operations of all first-flown first stages prior to launch, following the discovery of an performance-degrading anomaly associated with some manufacturing residue on certain engine components.

While additional updates will follow, current weather forecasts indicate only a 30% probability of violating the strict launch weather constraints. The current flight rules of concern are the Cumulus Cloud rule and the Flight Through Precipitation rule. 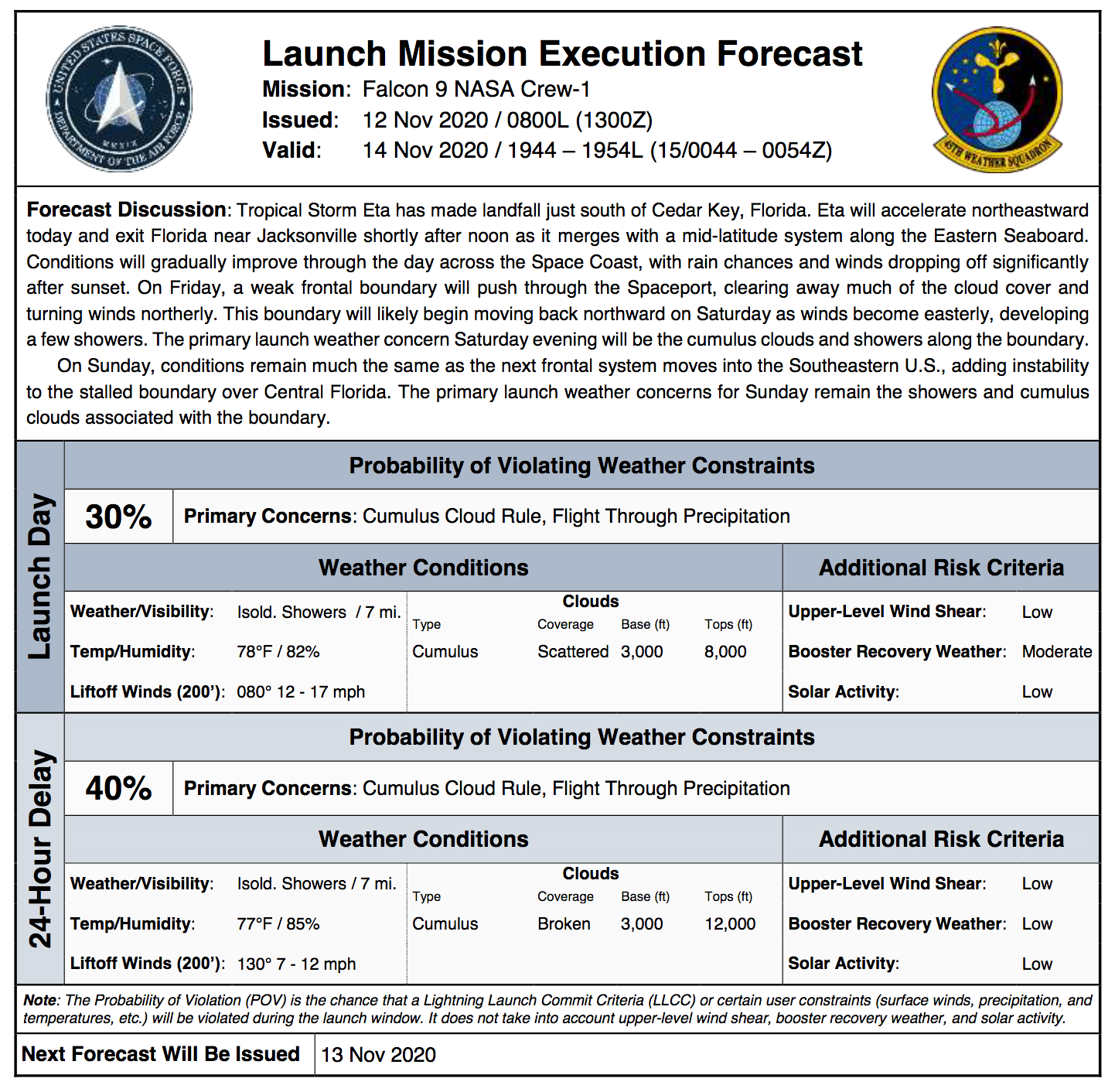 Note: Story has been updated to take into account a 24-hour delay, announced by NASA on Friday afternoon, November 13, 2020.

I look at these smiling guys standing at Kennedy Space Center and i am so proud. They are so brave and ready to accomplish their mission. Astronauts inspire me always. Good luck to you all guys and come back to Earth safely.