Chris Hadfield takes ‘flight’ once more: An Astronaut’s Guide to Life on Earth 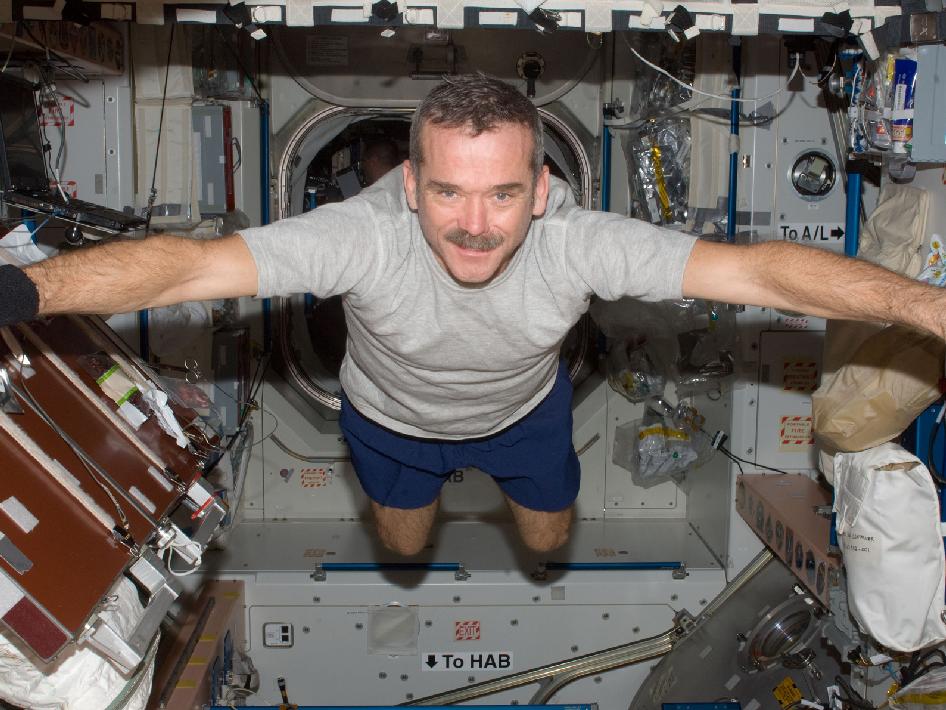 Chris Hadfield spent five months on the International Space Station and two weeks underwater. What’s left for him to do? Go around the world in 80 days – or at least visit Canada, the United States, the United Kingdom and Ireland in that time.

Hadfield, the Canadian astronaut whose last flight saw him in command of the ISS, is journeying by more pedestrian ways rather than by space shuttle or Soyuz capsule. For between now and December Hadfield is promoting his book, “An Astronaut’s Guide to Life on Earth: What Going to Space Taught Me About Ingenuity, Determination and Being Prepared for Anything” (Little, Brown, $28 USD). “Different people who have read the book come away with different things,” Hadfield said in a telephone interview.

Perhaps the book should be called “An Astronaut’s Guide to Life for Earth.” For the book is more than Hadfield’s recounting of achieving a goal he had since the age of 9 and of his three spaceflights. Yes, the chapter headings are a summary of that particular moment of Hadfield’s life, but they also carry a double meaning into life lessons.

“Some of them are perhaps counter-intuitive,” Hadfield said. In ‘The Power of Negative Thinking,’ for example, Hadfield notes it’s not planning for success that works, but rather the opposite, confronting failure and dissecting its various aspects and what the consequences are. By doing that, he writes, “You’ve forged the strongest possible armor to defend against fear: hard-won competence.”

That hard-won competence has been demonstrated over and over again during his career as an astronaut. In July Hadfield retired from the Canadian Space Agency “to take up new challenges,” according to his official agency biography.

But don’t think of him as retiring after “just” three flights. Hadfield has had a long 21-year career in the space program, having been selected in 1992.

“That’s a long time to be in a space program whose country doesn’t have its own launch vehicle,” Hadfield said. Hadfield first flew on space shuttle Atlantis to the Russian space station Mir in 1995. He was the only Canadian to visit Mir – which he broke into using a Swiss army knife, owing to enthusiastic Russian workers who oversecured the new shuttle-Mir docking module.

On that mission Hadfield became the first Canadian to operate the Canadarm, the shuttle’s remote manipulator system used for handling various payloads. Hadfield has traveled to orbit three times. He announced his retirement from the Canadian Space Agency in 2013. Photo Credit: NASA

His second flight, on Endeavour to the International Space Station on STS-100 in 2001 saw Hadfield becoming his country’s first spacewalker as well as helping to install Canadarm 2, a similar robotic arm for the station.

On his second trip to ISS on board the Russian Soyuz spacecraft in December 2012 he was a flight engineer as part of Expedition 34, then commander of the subsequent increment, touching down in May.

“Chris Hadfield made space exploration history by becoming the first Canadian to command the International Space Station, a feat that instilled pride from coast-to-coast-to-coast, “ Christian Paradis, Minister of Industry and Minister responsible for the Canadian Space Agency said in June in a statement following Hadfield’s return.

In addition to his flights, Hadfield served a long 25-flight stint as CAPCOM, or the person, usually an astronaut, who is the primary contact to astronauts in space. He also notes as well he was the last of his country’s class to fly. (Dafydd Williams’ last flight was STS-118 in 2007 before he retired from the Canadian Space Agency the following year, and Julie Payette’s final spaceflight was STS-127 in 2009. She left the organization in July.)

Hadfield’s ISS command marked only the second time an astronaut not from the United States or Russia helmed the space station. (Frank DeWinne of Begium, representing the European Space Agency was the first, and Koichi Wakata of Japan Aerospace Exploration Agency is slated to become the third such commander as part of Expedition 39, slated to begin in April 2014.) Hadfield was renowned for his social media efforts, which served to energize the public. Photo Credit: NASA

It was during his stay on the International Space Station that Hadfield captivated the world through social media – Twitter (@Cmdr_Hadfield), Facebook (Col. Chris Hadfield) and YouTube (Chris Hadfield). . He also has a Reddit page (ColChrisHadfield).

But Hadfield was using social media long before then.

Prior to Hadfield’s five-month stint on the International Space Station he was commander of NEEMO 14, a NASA undersea exercise which simulates exploration missions on other worlds in order to get a better understanding.

It was on that 2010 mission where Hadfield started using Twitter, he said.

“I found Twitter to be a meaningful and effective way to express and share thoughts on a personal level,” Hadfield said.

Apparently, people agree, because the numbers are mindboggling. Aided by his son Evan during his ISS stay – although Hadfield’s Tweets were his own – Hadfield today can now count almost 990,000 followers on that microblogging website. And it’s not just Twitter. On YouTube, his cover of David Bowie’s “Space Oddity” has been seen by more than 18.2 million people just on Hadfield’s account alone, with an additional almost 100,000 shares.

Hadfield’s popularity can be attributed to many factors, including having the right mix, Evan said. Or, “Above all, he was a wonderful storyteller, telling us, tirelessly and engagingly, about life in a remarkable place,” Ned Potter, a senior vice president at the communications firm RLM Finsbury, told Forbes in the June article, “How Chris Hadfield Conquered Social Media From Outer Space.”

What’s next for Hadfield? He is now an adjunct professor at the University of Waterloo in Ontario, Canada. But he still makes time for Tweets and Facebook posts, for YouTube videos (his channel is hosting “An Astronaut’s Guide to…” with a spacesuited person doing such Earthly things such as washing laundry, playing rugby, and commuting) and yes, there will be more books, including a children’s version of “An Astronaut Guide’s to Life.”

Chris Hadfield’s book tour will take him through Canada, the United States, the United Kingdom and Ireland. For more information on specific dates and venues, visit www.chrishadfield.ca on the web. A digital and audio eBook can be purchased through that site as well.