Bolden: State of NASA is Strong 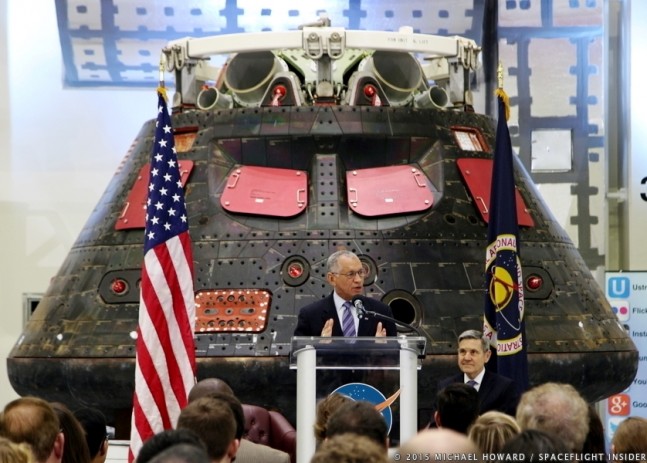 CAPE CANAVERAL, Fla. —  NASA Administrator Charlie Bolden delivered his annual State of NASA speech in the High Bay of the Neil Armstrong Operations & Checkout Building on Feb. 2, 2015. With a backdrop of three spacecraft, a pressure test vessel of Boeing’s CST-100, Orion, Space Exploration Technologies’ (SpaceX ) Dragon as well as the Orion spacecraft that carried out the Dec. 5 2014 Exploration Flight Test 1 mission, Bolden addressed a live audience of about 250 NASA employees and contractors as his comments were also broadcast across the country via NASA TV.

The core message Bolden delivered was that President Obama has proposed a NASA budget for Fiscal Year 2016 of $18.5 billion, an increase of $500 million over last year’s budget. Bolden said this increase validates the faith that the country has in the Space Agency. Lockheed Martin’s Orion spacecraft (left) which carried out this past December’s EFT-1 mission as well as one of SpaceX’s Dragon spacecraft were on display during the event. Photo Credit: Mike Howard / SpaceFlight Insider

Bolden told those in attendance, “I want every single American to feel the pride we feel when we talk about what we do at NASA. When you fly on any commercial aircraft, NASA is there with you. NASA developed the lighter composite materials and oxygen sensors that are used in every airplane today. The shock absorbers developed for the Space Shuttle are used today to protect buildings during earthquakes.”

Bolden continued, “As we all know, the most important planet we study is the one on which we live – Earth. The reality is our planet is changing – and the data continues to prove this, but we’re on it. NASA is a leader in Earth and climate science and our constantly expanding view of our planet from space is helping us understand Earth and its changes. In the last twelve months, we’ve launched five Earth science missions – five! The last in these “Year of Earth” missions, Soil Moisture Active Passive, or SMAP, was launched just this past Saturday. These missions are studying such diverse things as ocean winds, components of our atmosphere such as clouds and aerosols and precipitation on a global level.” Bolden joked that he originally wanted to hold the speech in Glendale, Arizona but the stadium there was previously booked. He chose to deliver the speech from Kennedy Space Center (KSC ) because they are redefining the center’s place for the future. He noted that the future crew systems will be processed and launched from KSC, solidifying its position as the pre-eminent space port for the 21st Century. KSC will be able to support both commercial and NASA missions. The budget for Kennedy Space Center is proposed at $2.5 billion for next year.

However, Bolden pointed out that the NASA budget is spread out amongst 37 states, far beyond the core NASA centers. He told of visiting tiny Bally Ribbon Mills in Pennsylvania where a team of 300 employees who manufacture advanced woven composite materials that will be key to future exploration missions. It was 2010 in the same building where President Obama tasked NASA to land on an asteroid. Capturing an asteroid has been described as being an important step in the journey to Mars.

Bolden explained, “Now U.S. companies, large and small, are developing the new systems in which our astronauts soon will travel from right here on the Space Coast in Florida to low-Earth orbit (LEO). This initiative, where we hand off low Earth orbit transportation to the private sector, is critical to our journey to Mars. The Boeing CST-100 mockup behind me that features the company’s first-generation weld structure is a prime example of how the American aerospace industry is rising to the challenge of increasing crew safety while bringing down the cost of space travel. This CST-100 weldless structure is an example of the innovative engineering that makes the spacecraft reusable up to ten times. This pressure dome has no welds, which allows for a short turnaround time between flights, increases simplicity of production and drives down costs.” Bolden went on to say, “NASA is an incredible investment for our nation because what we do not only uncovers new knowledge; it helps raise the bar of human achievement. I couldn’t be more excited about our future! We’re making steady progress and continuing to reach for new heights. People everywhere are attracted to what we do, because exploration embodies our values as a nation – resilience, hope, overcoming the challenges faced. As the Best Place to Work in Government, we share a willingness to learn from our mistakes so that we can transform the impossible into the possible.”

Following Bolden’s address during a separate event, NASA Chief Financial Officer David Radzanowski went through 27 pages of highlights of the proposed budget. Among the highlights are fourteen launches planned for Fiscal Year 2016. NASA hopes that the budget will advance the Nation’s two-pronged approach to space exploration plan and that it will ensure the U.S. regains the position as leader in terms of space exploration and technology, aeronautics research and discovery in space and Earth science. NASA will continue to develop the Orion spacecraft, Space Launch System and Exploration Ground Systems that might one day send astronauts beyond low-Earth orbit. NASA also continues to work toward a 2018 launch of the James Webb Space Telescope as well as an array of other missions and scientific efforts.

The agency has been tasked with not only returning to the business of sending crews beyond the orbit of Earth, but with also enabling commercial firms such as Boeing, SpaceX and Orbital Sciences Corporation to handle operations that have been the agency’s purview since the very beginning of the Space Age. Predominantly these involve ferrying cargo and crew to the current sole destination in LEO – the International Space Station. As stated above ?
The agency has been tasked with not only returning to the business of sending crews beyond the orbit of Earth, but with also enabling commercial firms such as Boeing, SpaceX and Orbital Sciences Corporation to handle operations that have been the agency’s purview since the very beginning of the Space Age.

Orbital Sciences isn’t going anywhere any time soon out of Wallops. The launch pad is still destroyed and Orbital is refusing to pay for the damage they caused.

Orbital has probably damaged its chances of getting the next CRS contract with that unfortunate episode in Wallops. Ideally, NASA should award it to Sierra Nevada instead, as Dreamchaser could bring ISS experiments and waste back on any runway in the US.

HARI, I totally agree with you.
If I was NASA, no way would I extend Orbital into the next phase.
Refusing to step up to the plate and accept financial responsibility is a sign of a irresponsible contractor. No way should the tax payer have to pay for the damage Orbital caused, especially knowingly that this rocket motor would probably blow up, they even admitted that it was just a matter of time.
Dream chaser would be better suited anyway since it can return cargo.

Dreamchaser with a new lease on life? I love the idea!

There is nothing wrong with Orbital’s concept. You have to take the trash out not matter where you live. The Cygnus vehicle gives NASA that option. Cygnus can be launched on Atlas V or Falcon 9v1.1. If Congress has already appropriated funds to repair the facility, then, why should Orbital pay? Congress could’ve attached instructions for Orbital to pay the gov back in a year or two. Since the AF is giving ULA an extra billion dollars for readiness, why shouldn’t Orbital get a break. Oh I get it, unless you’re one of the Big 2, you’re not supposed to get breaks.

From what I’m hearing out of Wallops, Orbital first agreed to pay up then reneged on what they promised. Seems like they have some ethical issues. It doesn’t matter what the government has paid for in the past, it’s still the responsibility of Orbital to pay for the damage they caused.

Someone at Orbital, for a very brief, very brief moment got a sense of responsibility…then quickly realized their error, its the tax payers responsibility! As far as the BIG 2..Boeing and Lockheed Martin, they have had NASA in their back pocket since GEMINI! Spacex is threatening the big boys and that’s not tolerated. Notice all the talk about Boeing and their great endeavors with CST-100. Another milk the tax payer project in the works!!! Dream chaser is exactly that…A dream chaser, its been airborne once after more than 10 years of development, not counting all the years of data accumulation with HL-10, M2F2, etc., plus some others of note. The only time the Dream chaseing test article was airborne, dropped from a helo for a simple glide test, it crashed on landing. Personally I believe Sierra Nevada should be investigated for defrauding the taxpayers! The only people right now shoeing anything is Spacex and the Russians! Although the Indians are showing the same moxxi NASA ONCE possessed!

I left one out of the picture…ULA, another GIANT! A smart giant!! Their waiting for congress who has been pushing with the help of a few for those lost shuttle jobs! When the folks at home start hearing how SLS is just another Budget Monster like the last promised cheap access to space program…The shuttle. They will be forced to kill it. ULA already knows what most folks saw…Delta IVH lift Orion into space. Sure it wont lift as much but with few more flights and a lot cheaper..(for the moment until ULA has NASA in their back pocket) it will do just as well! Theres some smart folks!
Mike