Bolden: ‘I would love to be an Orion astronaut!’ 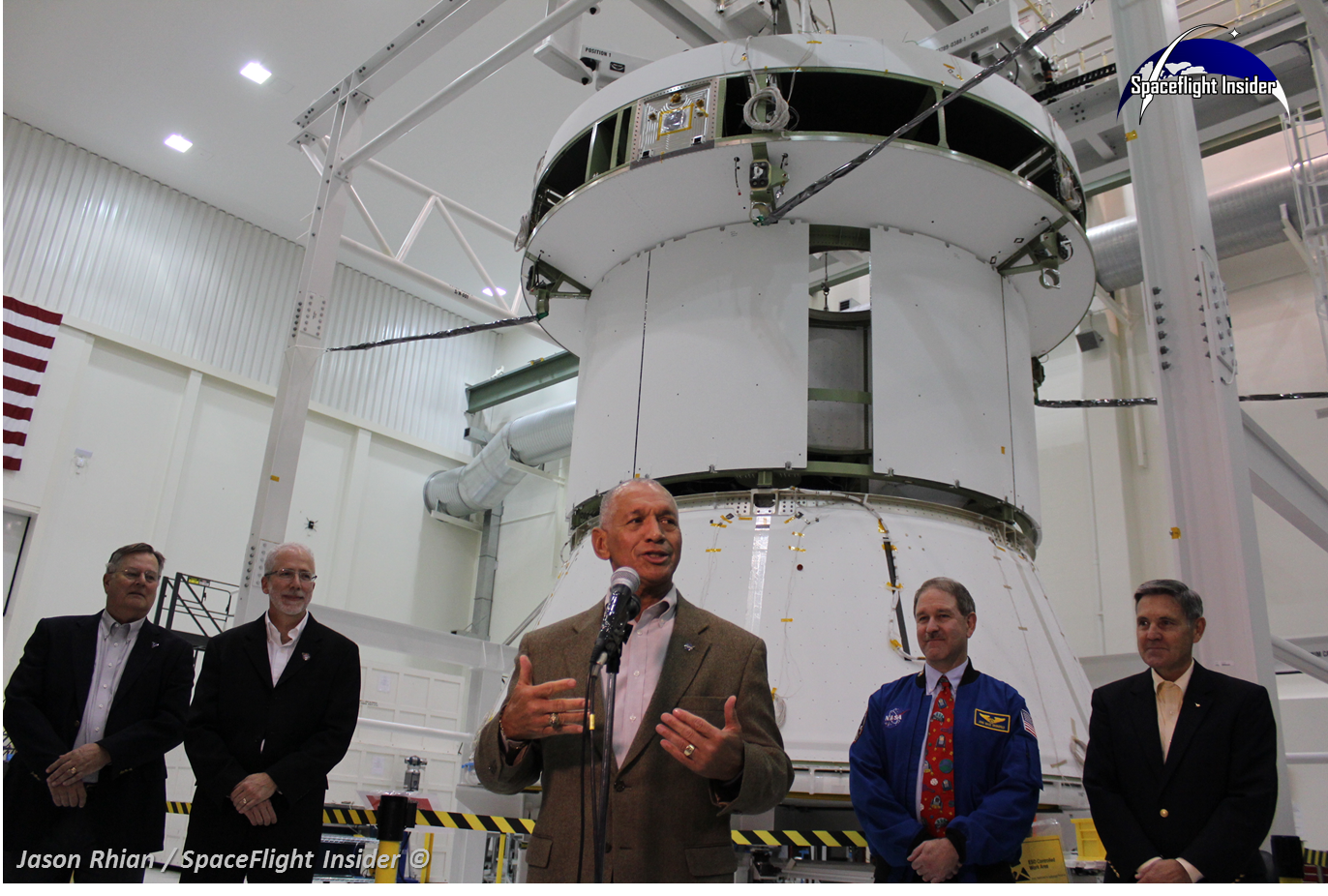 NASA Administrator Charles Bolden, flanked by an array of space agency officials addressed the media about progress that has been made on NASA's Orion spacecraft. Photo Credit: Jason Rhian / SpaceFlight Insider

CAPE CANAVERAL, Fla — NASA Administrator Charles Bolden paid a visit to NASA’s Kennedy Space Center and the adjacent Cape Canaveral Air Force Station to review both NASA’s next manned spacecraft, the Orion Multi-Purpose Crew Vehicle, as well as the space agency’s next probe to journey to the Red Planet – MAVEN. The Mars Atmosphere and Volatile EvolutioN or “MAVEN” is a $187 million spacecraft which will study the upper Martian atmosphere in an effort to better understand the processes which produced the thin Martian atmosphere we see today.

Bolden’s first stop was at the Operations and Checkout building (O&C) at Kennedy Space Center proper. Within is the flight test article of the Orion spacecraft which is currently set to launch atop a United Launch Alliance (ULA) Delta IV Heavy rocket from Cape Canaveral in September of next year. NASA and Lockheed-Martin have done extensive work on the Orion flight test article which will conduct the Exploration Flight Test 1 mission in September of 2014. Photo Credit: Jason Rhian / SpaceFlight Insider

The Orion spacecraft has obviously had some work done to it since the media was introduced to spacecraft in June 2012. Bolden was joined by two other former shuttle astronauts, Robert Cabana, who is the Kennedy Space Center director and John Grunsfeld, NASA’s Associate Administrator for the space agency’s Science Mission Directorate.

This iteration of Orion will be sent to orbit atop a ULA Delta IV Heavy rocket in the fall of 2014. The spacecraft will fly unmanned and be, in essence, very similar to the historic Apollo 4 flight. The Orion spacecraft will travel out 3,600 miles, about 14 times further out than the International Space Station currently orbits. It will conduct two orbits and then be directed to reenter Earth’s atmosphere. Bolden expressed how he viewed the spacecraft simply and succinctly stating:

“I would love to be an Orion astronaut,” he lamented that this was unlikely to happen.

Those that have had the opportunity to speak with the current NASA administrator know him as an emotional person, who expresses his feelings readily when speaking. Today’s event were no different. Bolden’s voice began to crack when he mentioned the passing of M. Scott Carpenter, one of the original Mercury astronauts. Carpenter passed away last month. Bolden mentioned that he had gone inside the Orion spacecraft he now stood in front of.

“I really can’t compare this to my experiences on shuttle. This is a spacecraft tasked with exploration and it has a different role than shuttle did,” Bolden said as he turned to his two fellow astronauts. “I think both Bob and John would also offer different views than the ones I had as Bob (Cabana) is a former test pilot and John (Grunsfeld) was inside the Hubble Space Telescope. I can say that it is an impressive vehicle and we are all very proud of it.” One of the key elements of the Orion spacecraft which will be tested out during the September 2014 flight – will be the heat shield which will protect crews from the extreme heat of reentry. Photo Credit: Jason Rhian / SpaceFlight Insider

This will be a crucial test, one of the primary ones for the EFT-1 mission, which will test out the spacecraft’s heat shield. The Orion conducting this mission will return at a blistering 20,000 miles per hour – the ultimate test of the system at the base of the craft which will protect the crew during reentry.

The next stop in Bolden’s tour was Cape Canaveral Air Force Station’s Space Launch Complex 41. This is where the United Launch Alliance Atlas V 401 rocket is poised to launch MAVEN to its Martian destination. Flanked again by Grunsfeld as well as the Vice-President of ULA’s Atlas and Delta programs, Jim Sponnick and MAVEN’s Principal Investigator Bruce Jakosky. MAVEN is currently scheduled to launch at 1:28 p.m. EST on Monday, Nov. 18. The spacecraft has a two-hour launch window in which to get off the pad and on its way. Weather conditions are the only current wild card which could delay the launch. The unpredictable Florida weather has seen a number of fronts roll in and out in recent days. Current conditions at the pad are mostly cloud-free skies and light winds.