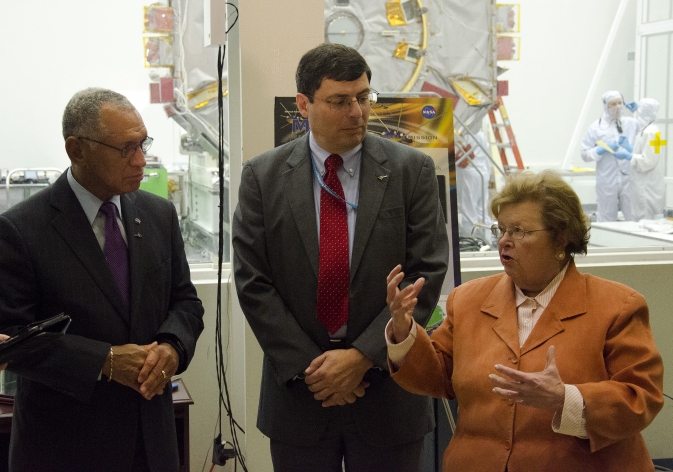 NASA Administrator Charles Bolden visited NASA Goddard Space Flight Center in Greenbelt, Maryland on Tuesday, October 22. The trip was Bolden’s first trip to a NASA field center since the end of the of the government shutdown last week. Bolden was accompanied by Sen. Barbara Mikulski of Maryland who is the chairwoman of the Senate Appropriations Committee.

During their tour, Bolden and Mikulski viewed launch preparations for the Global Precipitation Measurement (GPM) and Magnetospheric Multiscale (MMS) missions. Bolden and Mikulski, along with NASA Goddard Space Flight Center Director Chris Scolese talked to reporters outside of a clean room where the MMS spacecraft is being prepared for a planned 2015 launch.

During the government shutdown most NASA employees were furloughed and work was halted on most upcoming missions . Exceptions were granted for ongoing missions like the Mars Science Laboratory rover Curiosity, the Juno spacecraft on its way to the planet Jupiter and Mission Control which is supporting astronauts on orbit aboard the International Space Station. The Mars Mars Atmosphere and Volatile EvolutioN or “MAVEN” mission was also granted an exception to the shutdown so that preparations for a planned November 18 launch could continue.