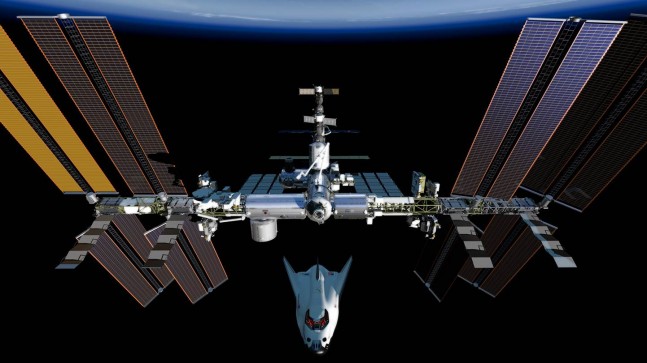 Sierra Nevada Corporation along with NASA and other partners announced the progress being made to launch its Dream Chaser space plane in November 2016. Image Credit: SNC

KENNEDY SPACE CENTER, Fla — During the lead up to the launch of NASA’s Tracking and Data Relay Satellite “L” (TDRS-L) spacecraft, the space agency as well as some of its government commercial partners highlighted the fast-approaching first launch date for Sierra Nevada Corporation’s (SNC) Dream Chaser spacecraft. Dream Chaser is one of four companies competing under NASA’s Commercial Crew transportation Capability (CCtCap) and is poised to conduct its first launch from Cape Canaveral Air Force Station’s Space Launch Complex 41 located in Florida in November 2016.

As it currently stands, NASA lacks the capacity to launch crews on its own and is dependent on the Russian Federal Space Agency’s (Roscosmos) Soyuz spacecraft to send astronauts to the International Space Station (ISS). Besides SNC, Space Exploration Technologies(SpaceX), Blue Origin and Boeing – all are producing spacecraft under CCtCap to correct this deficiency.

During the Jan. 23 press conference, SNC highlighted the successes that have come with the past year, these included the first free flight test of the spacecraft, which took place in October of last year. For NASA, this could herald a return of something long absent from Florida’s Space Coast – the sonic booms of a space plane returning from missions on orbit. NASA has been working to convert Kennedy Space Center into a multi-user spaceport. SNC is just now starting to become a part of this effort. To add its offering to the lineup of potential service providers at KSC, SNC has tapped a launch service veteran to power the stubby spacecraft to orbit. Fellow Colorado resident – United Launch Alliance’s (ULA) Atlas V rocket has been selected as Dream Chaser’s launch vehicle. SNC’s Mark Sirangelo detailed at length the progress his company, along with Lockheed-Martin and United Launch Alliance had made in making Dream Chaser ready for launch. Photo Credit: Mike Deep / SpaceFlight Insider

SNC has purchased the Atlas V which will conduct the 2016 uncrewed test flight already. The winged spacecraft is described as being capable of delivering a mixture of either crew or cargo to the International Space Station (ISS). Recently, SNC announced that NASA was not the only space agency interested in Dream Chaser. The European Space Agency (ESA) has signed an agreement with SNC to identify: “areas of collaboration with [the] European industry” to develop hardware, software and missions ideas for SNC’s Dream Chaser.

NASA has been directed on a two-pronged approach in regards to its manned space program. While commercial companies such as SNC work to deliver crew and cargo to the orbiting International Space Station, the space agency itself, in a close collaboration with the primary contractor, Lockheed-Martin – is working to prepare Orion for its first test flight later this year. While Lockheed-Martin is working on Orion, it has also been selected by SNC to work on Dream Chaser at the Operations and Checkout (O&C) building at Kennedy.

These two efforts have seen established structures, such as the O&C building be used both for Orion and for Dream Chaser. If both of these efforts continue to move forward, within the next two years, the public could see images of different spacecraft being prepared for missions  – within the same building. This multiplicity is at the heart of what NASA is working to achieve at Kennedy Space Center.

Other structures out at Kennedy, including the iconic Vehicle Assembly Building, Shuttle Landing Facility and Launch Complex 39B have been renovated to accommodate these efforts.

Dream Chaser will, in some aspects, resemble the space shuttle program with launches being carried out at Cape Canaveral’s SLC-41 and landings taking place nearby at Kennedy Space Center’s Shuttle Landing Facility (under an agreement with NASA and the State of Florida’s aerospace-development organization Space Florida).

“We are pleased to see continued growth of the State’s investment into KSC  facilities like the O&C,” said Space Florida President Frank DiBello. “It is  clear that the future of commercial space growth is happening right now in  Florida and we couldn’t be happier to work with companies like Sierra Nevada  to realize their Florida-based expansion goals.” Dream Chaser is derived from NASA’s HL-20 spacecraft, which at one point was going to serve as a “lifeboat” for the International Space Station. SNC’s Dream Chaser uses much of the lessons learned during the shuttle program. Image Credit: SNC

For one of the members working to see KSC become a multi-user spaceport, the rationale as to why Florida was selected was clear.

“The reason why we picked Florida was so as to not only benefit from the proximity to the various launch complex’s but to also benefit from the wealth of experience which the Space Coast offers, said Lockheed-Martin’s Deputy Program Manager for NASA’s Orion spacecraft, Larry Price.

Dream Chaser is not alone in using ULA’s Atlas V booster to provide a ride to orbit. Boeing’s CST-100 spacecraft, which will be processed in one of the space shuttle’s Orbiter Processing Facilities, will also use the rocket. Unlike Dream Chaser, however, the CST-100 is a capsule-based design. For Sierra Nevada’s part, the extensive history that the Atlas family of launch vehicles has, was a chief determining factor in selecting the rocket for use with the Dream Chaser. SNC’s Mark Sirangelo stated that if ULA’s Atlas booster, a descendant of which powered the first American to orbit, John Glenn, was good enough to accomplish this feat – it was good enough for Sierra Nevada’s Dream Chaser. Photo Credit: Carelton Bailie / SpaceFlight Insider