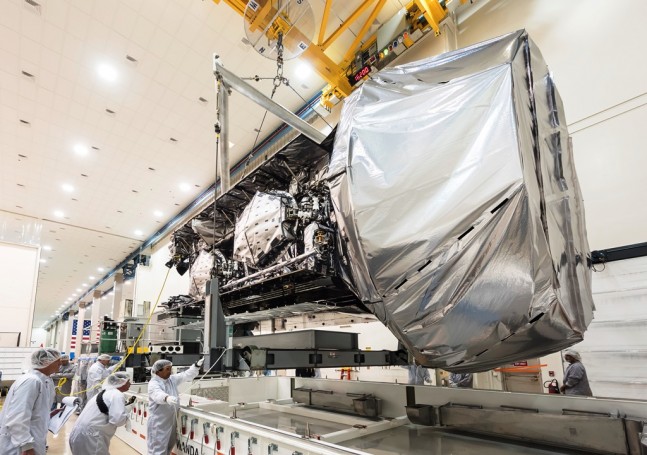 Lockheed Martin and the United States Navy delivered the fourth of the Navy’s Mobile User Objective System (MUOS ) satellites to Cape Canaveral Air Force Station in Florida on Sunday, June 28. With the arrival of MUOS-4, the next phase of the mission is for Colorado-based United Launch Alliance (ULA ) to loft the communications satellite atop an Atlas V 551 booster.

As its name implies, MUOS-4 is the fourth in a planned series of five satellites, each launched atop a ULA Atlas V 551. These spacecraft will provide communications to military forces by allowing them to have services similar to those enjoyed by private citizens.

Constructed at Lockheed Martin’s Sunnyvale, California, facility, MUOS-4 was transported to the 60th Air Mobility Wing of Travis Air Force Base where it was loaded onto a waiting C-5 Galaxy aircraft. Upon arrival in Florida, it was transported to the Astrotech Space Operations facilities located in Titusville, Florida.

MUOS will provide warfighters with beyond line-of-sight communications assets at points around the world. Providing services similar to that of a smartphone, MUOS also is comprised of four ground stations positioned at various locations around the world. The system’s manufacturer has described MUOS as providing simultaneous crystal-clear voice, and video and mission data, on a high-speed Internet Protocol-based system. “MUOS allows troops all over the world to talk, text and share mission data seamlessly while traveling, like a cellular network, without having to worry about where they are in relation to a satellite,” said Iris Bombelyn, Lockheed Martin’s vice president for narrowband communications. “MUOS-4 will complete our near global coverage, reaching further north and south toward the poles than ever before.”

Whereas older UHF (Ultra High Frequency) satellites require users to be close enough geographically for the spacecraft to communicate, MUOS can transmit data from one geographic location to others.

With the construction of the four ground stations complete, MUOS should be operational by the end of 2015. To ensure that everything is in place to get the complete fleet on orbit and operational requires a good deal of effort.

“Over the next few weeks, we will be very busy with MUOS-4 at Astrotech, where members of my team will perform power-on ‘health checks’ to confirm the satellite has suffered no ill-effects from the transport. At the same time, we’ll verify that the RF and ground links to the Naval Spacecraft Operations Center (NavSOC) are operational. NavSOC, in Pt. Mugu, CA, is where the Navy operators fly their satellite constellations from,” Bombelyn told SpaceFlight Insider. “Once this check out is complete, we begin prepping to load the propellants which will allow MUOS-4 to maneuver on orbit for the next 15 years.