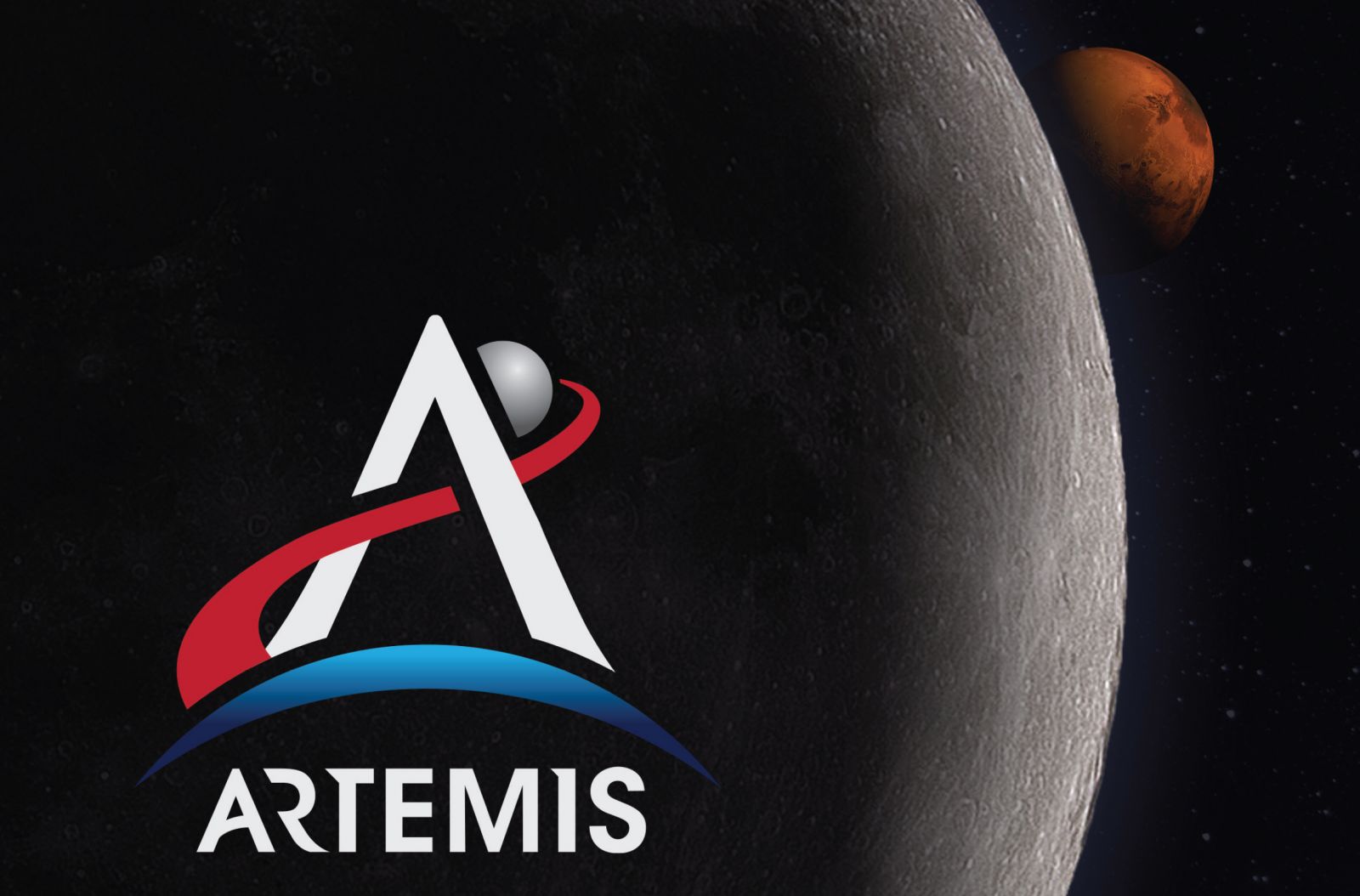 NASA is currently being prepped to send astronauts to the Moon under its “Artemis” program, which the astronauts presented today could play a big role in. Image Credit: NASA

SANDUSKY, OHIO — Testing is fully underway on the Orion spacecraft for the upcoming Artemis I test flight mission at NASA’s Plum Brook Station testing facility in Sandusky, Ohio. The Orion crew capsule, integrated with its European Service Module, is currently inside the facility’s Space Environments Complex undergoing thermal vacuum tests in the largest thermal vacuum chamber in the world.

“We got everything closed up right before Christmas and pumped down the chamber,” said Nicole Smith, Orion testing Project Manager at Plum Brook. “We are about a third of the way through the test now for thermal vacuum, and things are going very well.”

The Artemis I mission will be the second uncrewed test of the Orion spacecraft, but the first to launch the vehicle atop NASA’s Space Launch System (SLS) rocket. The launch will send Artemis I on a mission to orbit the Moon and return to Earth. The mission is currently scheduled for launch sometime in 2021.

The Artemis I Orion spacecraft left Kennedy Space Center and arrived at Mansfield Ohio’s Lahm airport aboard NASA’s Super Guppy on November 25. It was unloaded from the aircraft and transported along a 41-mile route to Plum Brook Station the following day. Officials from the NASA Glenn Research Center in Cleveland worked with the Ohio Department of Transportation and local utility companies to raise more than 700 overhead power lines along the spacecraft’s route through northeast Ohio to the Plum Brook facility.

A more than $150 million upgrade to testing facilities at Plum Brook over the last decade prepared the testing station for the arrival of Orion.

Upon its long-awaited arrival, the spacecraft was unpacked from its transportation equipment, tilted upright by a device aptly referred to as a “verticator”, and surrounded by a specially designed Heat Flux system which looks like a metal cage in the outline of the spacecraft. The Heat Flux system provides the heating portion of the thermal test, up to 300 degrees F.

“We next moved it over to the cryo floor, got everything bolted down, and moved the cryo floor over into the thermal vacuum chamber,” Smith said. “Once we were in there, there was a ton of work we had to do in hooking up all the spacecraft flight instrumentation, the ground test instrumentation, and the facility instrumentation. A ton of wiring in there. Lots of inspections between the folks at NASA, Lockheed, and ESA (European Space Agency) and Airbus, doing inspections on all the hardware.” 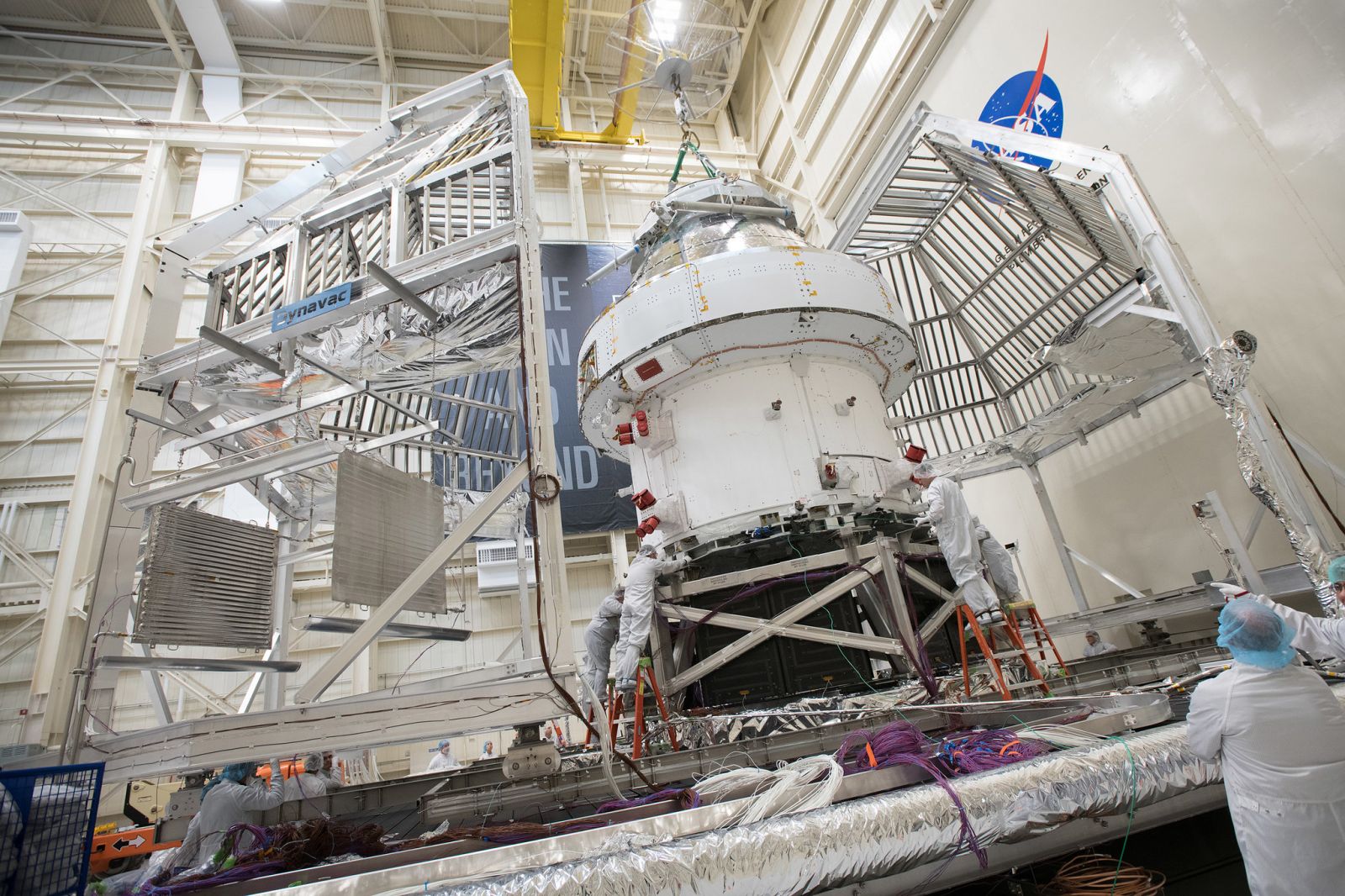 Lockheed is the prime contractor for Orion, and ESA, through contractor Airbus, is responsible for the European Service Module (ESM), which supplies electricity, propulsion, thermal control, air and water to Orion.

The spacecraft and Heat Flux system were then surrounded by a cryo shroud that would provide the cold portion of the tests, down to -250 degrees F. The vacuum chamber’s giant doors were closed, the chamber pumped down to space vacuum conditions, and the tests began.

“We have completed cold cycle #1,” Smith said. “We did the nominal chill-to-Sun configuration, when the spacecraft is turned and traveling away from the Sun, which is a pretty common position it will be in. That included depressurization of the crew module cabin down to about 1 psi. We also performed a cold stress eclipse case, and at that point we did a spacecraft performance test, and the spacecraft performed beautifully.”

The engineering teams at Plum Brook will next do a hot cycle in the chamber and do a thermal balance test, which verifies the spacecraft’s performance at temperatures with an additional margin of what is expected during flight thermal conditions. In addition, the teams will do some testing that simulates the spacecraft conditions for the crewed Artemis II mission.

“We will also do a thermal balance with Artemis II heat flows,” Smith said, “because we have a little more hardware in the spacecraft for Artemis II and you have people in there, so you’ll have more heat in the crew module that you’ll have to be able to expel. So we will practice that by putting some heat through the facility systems into the spacecraft.” 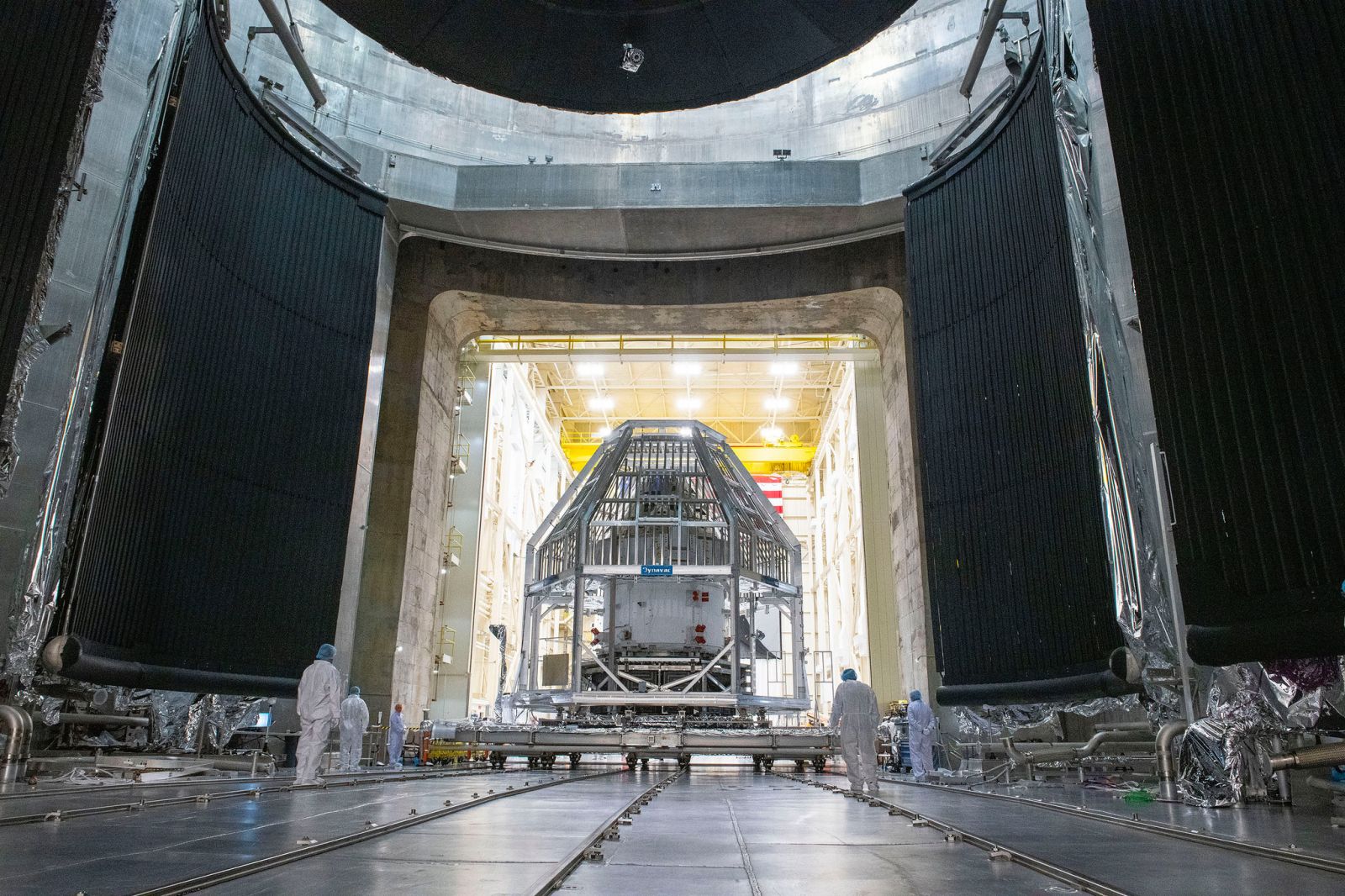 Lockheed Martin has been developing and testing Orion since 2011 with the hopes that it might, one day, be used to send astronauts beyond low-Earth orbit. Photo Credit: NASA

The testing teams are currently ramping up the chamber for a hot stress test, which will be roughly the next third of the testing campaign.

“Then we will ramp back down,” Smith said. “We will do another cold case, and at the beginning of that cold case we will repressurize the crew module cabin. And then we will do a second hot stress case and then we come back to ambient conditions.”

At each of the thermal plateaus the engineers perform a spacecraft functional test to check out all its systems to make sure they are functioning successfully under those conditions. If they are not, they will make adjustments.

“We are taking a ton of data snapshots,” Smith said. “We are doing that during the ramp ups and downs of thermal. Sometimes one an hour. The thermal team is looking at everything and how it compares to their models”.

The thermal portion of the test campaign is expected to be completed by the end of February. Next the spacecraft will be moved out of the thermal chamber and into the high bay where the Heat Flux cage and all the thermal instrumentation will be removed. The spacecraft will then be prepped for the electromagnetic interference (EMI) testing.

Orion will be moved back into the thermal chamber, though the chamber will not be pumped down. The chamber’s shape and the fact that it is made out of aluminum make it ideal for conducting the reverberant EMI testing.

“Once it is in the chamber we close the big aluminum doors and then we run the EMI equipment from just outside the chamber,” Smith said. “We do two different types of tests. One is a compatibility test. We run the vehicle’s systems in an RF quiet environment, and make sure that all of them work well together. Then we add external sources, stuff that the spacecraft would experience on the launchpad or during launch or landing.”

Those external sources would be signals like radar pings that could potentially cause the spacecraft’s electronics or avionics to have a negative reaction. The EMI testing should take about ten days to test all those systems.

“We plan to have the testing completed around the end of March,” said Jimi Russel, a spokesman for NASA Glenn. “There will be a media event at that time to mark its trip back to Kennedy.”

That return to KSC will see the spacecraft repacked on its transport equipment and trucked back the same route to Mansfield, and placed aboard the Super Guppy for the return flight.

The current tests are Plum Brook Station’s latest contributions to the Orion spacecraft and Artemis programs. Plum Brook previously tested an ESM test article in its reverberant acoustic test facility and its mechanical vibration facility in 2016. It also conducted acoustic tests on the Orion Abort Ascent 2 test capsule in 2018.

These test capabilities are solidifying Plum Brook Station’s reputation as a one-stop-shop for spacecraft environmental testing.