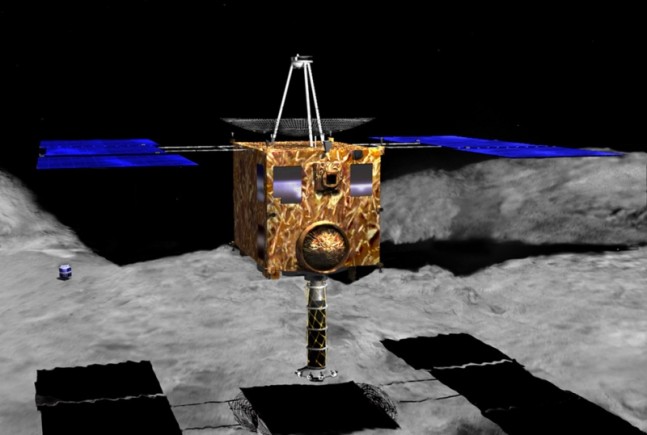 The Japan Aerospace Exploration Agency (JAXA) unveiled on Sunday a new space probe that is expected to be launched later this year on a mission to an asteroid to help unravel the mystery of how life began in our solar system. Developed at a cost of about 28.9 billion yen ($280 million), the Hayabusa 2 will collect rock samples from 1999 JU3, a nearly spherical asteroid about 900 meters in diameter with an orbit that brings it close to the Earth and Mars. “(The Hayabusa 2 project) will be a touchstone mission in our endeavor to explore space,” said Hitoshi Kuninaka, a JAXA official handling the project.

At 1.6 meters by 1 and 1.25 meters tall, the Hayabusa 2 is almost the same size as its predecessor, Hayabusa, which in 2010 became the world’s first spacecraft to return to Earth with samples from an asteroid named Itokawa. A technician standing next to the Hayabusa spacecraft helps to provide a sense of scale as to the size of the probe. Photo Credit: The Japan TImes

When its solar panels are spread, the new 600-kilogram spacecraft has a width of 6 meters.

Unlike Itokawa, 1999 JU3 is a type of asteroid that has more carbon components. This means the samples taken from it may contain organic substances and minerals with water that could provide clues to the origins of life.

Kuninaka, who was responsible for developing the ion engine that powered the original Hayabusa, was realistic about the new spacecraft’s prospects, given all the problems he dealt with during the first voyage.

“Of course, I hope things will go smoothly,” Kuninaka said about the upcoming mission. “We have had many difficulties in the process of developing the new asteroid probe. Space is never an easy place.”

This article originally appeared on Astro Watch and can be viewed here: JAXA Asteroid Hunter