Japan shows off its space ambitions with upcoming HTV flight 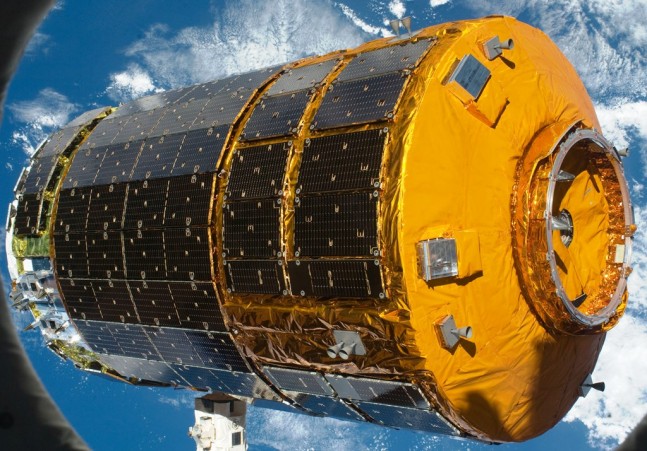 It has been a busy week for the Japan Aerospace Exploration Agency (JAXA ) as the country once again demonstrated its growing space prowess. The agency presented its core advancements in fields of cargo transportation and rocketry, and also showed off its persisting lunar aspirations via a rocket and its payload of the next HTV cargo craft bound for the International Space Station.

On July 1, JAXA unveiled its next automated HTV spacecraft, designed to deliver a payload to the Space Station. Named Kounotori-5 (HTV-5), which means “white stork” in Japanese, the freighter is being readied for its upcoming launch on Aug. 16 to resupply the ISS. If everything goes according to plan, HTV-5 will lift off from Tanegashima Space Center atop an H-IIB rocket and is expected to dock with the Space Station on Aug. 22.

The HTV-5 is 33 ft. (10 m) long and 14.4 ft. (4.4 m) in diameter, and is capable of delivering up to 6 metric tons of cargo. It will transport supplies, such as food and water, as well as the equipment and materials for experiments. Since the June 28, 2015, loss of a SpaceX Falcon 9 rocket, the Japanese HTV is one of two craft currently capable of traveling to the ISS. Photo Credit: NASA

The launch of the HTV-5 spacecraft follows the successful flights of four previous missions. The first Kounotori craft was launched on Sept. 10, 2009, with 4.5 metric tons of supplies for the orbiting laboratory. The flight prior to the upcoming one was successfully launched on Aug. 3, 2013, delivering 5.4 metric tons of cargo to the Station, and was deorbited on Sept. 7, 2013.

“We have successfully launched four previous Kounotori transport vehicles,” said Kaneaki Narita, head of the HTV Technology Center. “We hope to steadily carry out our mission, relentlessly tackling each task.”

The HTV-5’s upgrades include improved cargo capacity and modification of its solar panels.

Japan wants to continue the successful streak with at least four more missions for the soda can-shaped vessel. The next Kounotori spacecraft, HTV-6 is planned to be launched in 2016. Last week was not just important in terms of the HTV – JAXA also unveiled a new launch vehicle as well. Designated the H3, it is the successor of the H-IIA and
H-IIB launchers. The agency announced the name in coordination with the rocket’s prime contractor, Mitsubishi Heavy Industries, Ltd.

The H3 is 207 ft. tall (63 m) and has a core rocket diameter of 17 ft. (5.2 m). It differs from previous versions by using a new first stage engine LE-9, having an improved solid rocket booster, and an improved second stage engine. It will be capable of launching more than 6.5 metric tons into Geostationary Transfer Orbit (GTO).

However, that’s not the end of Japan’s plans to strengthen its position in the global space industry. As was reported by the Washington Post, a Japanese expert panel on space development at the Education, Culture, Sports, Science, and Technology Ministry released a report that includes sending an unmanned probe, known as the Smart Lander for Investigating Moon (SLIM ), into lunar orbit.

The next step will be the landing of a spacecraft at the south pole of the Moon in cooperation with the United States. The panel of experts justified the decision mentioning the possibility that frozen water could exist at the lunar south pole. If everything goes well with the SLIM mission, JAXA plans to follow up by sending a probe to the moons of the planet Mars. I’m glad the Japanese didn’t decide to abandon their cargo craft like the Europeans did.

It is good that Japan is represented as a contributing member of the International Space Station,especially, since ESA has no longer been providing ATV (HTV) support. Dragon X and Boeing, two “commercial” US business that are, also, providing ATV support are not the only fishes in the sea. It is unfortunate that all of the ATV’s are not reusable and are only a one use commodity. It would be great if the ATV’s were multi usable being able to take off and land,and reused in order to save on labor, money and material goods. They should be like drones, being able to take off to the ISS, dock, unload and depart from the ISS and land in a space port on Terra Firma.