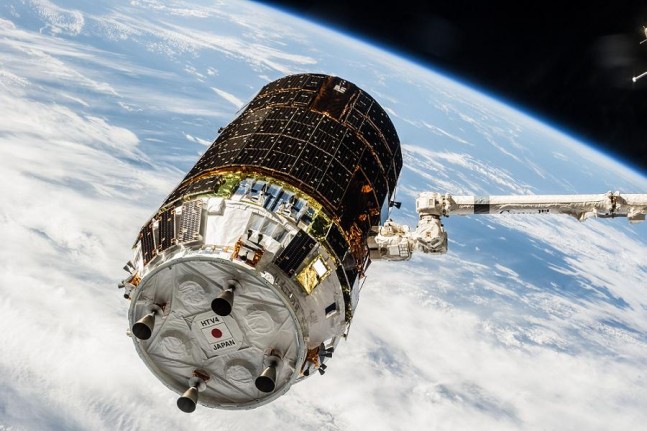 HTV-4 spacecraft being grappled by Canadarm2 attached to the ISS. Photo Credit: NASA/JAXA

The Japan Aerospace Exploration Agency, or “JAXA”, wants to upgrade its homegrown H-II Transfer Vehicle (HTV ), also known as Kounotori, an automated cargo spacecraft used to resupply the International Space Station (ISS). On Wednesday, May 20, 2015, the country’s Education, Culture, Sports, Science and Technology Ministry unveiled the plan to improve the HTV craft at a meeting of a panel of space development experts.

The ministry is looking to include relevant expenses in its budget estimate for the next fiscal year if the plan is approved by the government’s Committee on the National Space Policy.

The HTV spacecraft is 13 feet (4 meters) across and about 33 feet (10 meters) in length and an estimated mass of 10.5 tons. Manufacturing and maintenance costs will be halved from about $165 million by reducing the spacecraft’s mass by about 30 percent while maintaining its transport capacity of some 6 tons. The development period is still unknown.

HTV is designed to deliver supplies including food, clothes, and experiment devices to the ISS in orbit at an altitude of about 400 kilometers and return with spent equipment, used clothing, and other waste material. The spacecraft with waste material is incinerated when it makes a re-entry into the atmosphere.

The spacecraft consists primarily of three parts: a propulsion module installed at the rear and composed of main engines for orbit change, Reaction Control System (RCS) thrusters for position control, fuel and oxidizing reagent tanks, and high-pressure air tanks; an avionics module installed in the center part, with electronic equipment for guidance control, power supply, and telecommunications data processing; and a logistics carrier that stores supplies.

The development of the HTV is aimed at the practical use of a low-cost and highly reliable means of transport to the ISS. It is expected that the practical operation of the spacecraft will allow Japan to accumulate know-how that can serve as basic technology for its future projects on the Space Flyer Unit and on manned transportation.

Four HTV spaceships have been launched to space so far. The first craft was launched on Sept. 10, 2009. Five subsequent missions are planned—one each year for 2015–2019.

Japanese launchers aren’t famous for being cheap. They don’t even try to compete for commercial cargo, except for secondary payloads for which they have had a couple of non-Japanese customers. This looks like a part of the Jap gov’s plan to spend borrowed money on anything, regardless of its usefulness. Developing another uneconomical ISS supply vehicle won’t help space flight. There’s already a ridiculous flora of cargo transfer vehicles to LEO (HTV, ATV, Dragon, Cygnus, Progress). Space flight is expensive simply because 10 different launchers/spacecrafts are developed for every function. Costs could be cut by 90% simply by stop developing more non-competitive copies of what is already available. Multitude is good for competition, but for example JAXA does not “compete”, this is all about political decisions.

Not an unreasonable point at all but I’d still rather thy had some skin in the game, one only has to look at the recent problems that Russia is having to be grateful that there is diversity in up-mass transport.

There are no more ATV’s. Getting into space is expensive. Japan is an independent nation. They will probably keep producing the HTV’s as long as there is an ISS so they can keep up with China.