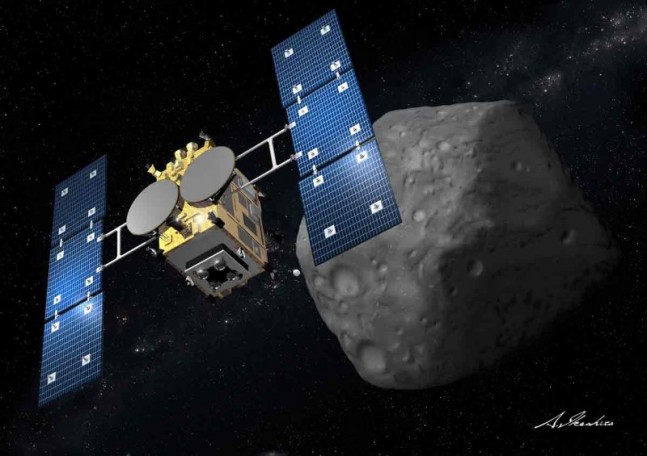 Mitsubishi Heavy Industries, Ltd. and the Japan Aerospace Exploration Agency (JAXA) have decided to launch the H-IIA Launch Vehicle No. 26 (H-IIA F26) with the Asteroid Explorer Hayabusa 2 onboard at 1:24:48 p.m. (Japan Standard Time) on Nov. 30, 2014. The launch will take place from Yoshinobu Launch Complex at the Tanegashima Space Center.

Also included in the payloads are three small satellites, including one developed by the Kyushu Institute of Technology. The Hayabusa 2 spacecraft is expected to embark on a four-year voyage to the 1999 JU3 asteroid. When it gets there, some time in 2018, it will release a powerful cannon which will fire a metal bullet at the asteroid’s barren crust, once the probe itself has scuttled to safety on the far side of the rock. It will then return to scoop up material uncovered by the cannon blast. “It serves to enhance our international presence to conduct challenging space exploration by making use of our nation’s scientific and technological power,” said Hakubun Shimomura, Japan’s minister of education, culture, sports, science and technology, at a news conference.

If all goes well, the pristine asteroid samples will be returned to Earth by the time Tokyo hosts the Olympic Games in 2020.

Asteroid Explorer Hayabusa 2 is a successor of Hayabusa (MUSES-C), which revealed several new technologies and returned to Earth in June 2010.

To learn more about the origin and evolution of the solar system, it is important to investigate typical types of asteroids, namely S-, C-, and D-type asteroids. A C-type asteroid, which is a target of Hayabusa2, is a more primordial body than Itokawa, which is an S-type asteroid, and is considered to contain more organic or hydrated minerals — although both S- and C- types have lithologic characteristics.

Minerals and seawater which form the Earth as well as materials for life are believed to be strongly connected in the primitive solar nebula in the early solar system, thus we expect to clarify the origin of life by analyzing samples acquired from a primordial celestial body such as a C-type asteroid to study organic matter and water in the solar system and how they coexist while affecting each other.

This article originally appeared on Astro Watch and can be viewed here: Hayabusa 2