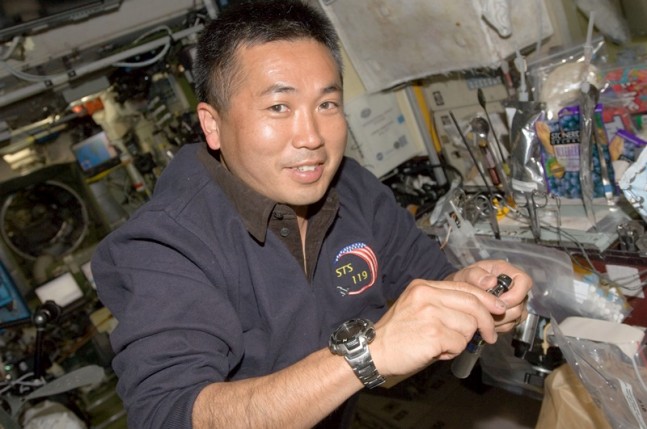 The International Space Station has it's first Japanese commander, Koichi Wakata, who took the helm at the orbiting laboratory on Sunday, March 9. Photo Credit: NASA

On Monday at 8:02 p.m. GMT, the Russian Soyuz TMA-10M spacecraft will detach from the International Space Station (ISS) and plummet toward Dzhezkazgan, Kazakhstan. The vessel’s departure will see the return of the ISS’ Expedition 38 crew to Earth. Commander Oleg Kotov joined by flight engineers Mike Hopkins and Sergei Ryazanskiy came aboard the space station back in September and have since completed one hundred sixty-six days aboard the orbiting outpost. With their departure a new era, a new first is about to take place at the laboratory – the first Japanese commander. The Expedition 38 crew launched to the International Space Station in November of 2013. Photo Credit: NASA

On Monday at 8:50 p.m. GMT, the crew of the ISS will hold an inauguration ceremony to swear in Koichi Wakata, who was flight engineer of Expedition 38 and will now assume command of Expedition 39. Wakata is the Japan Aerospace Exploration Agency’s (JAXA) first commander of ISS.

The “Change of Command” ceremony is traditional aboard the ISS. NASA Television will cover the event which will conclude with Wakata formally relieving Kotov of command.

Koichi Wakata is a 50-year-old Japanese astronaut who is serving his second term aboard the ISS. He has been on board the ISS since this past November, when he arrived aboard the Soyuz TMA-11 with NASA astronaut Rick Mastracchio and Russian Federal Space Agency cosmonaut Mikhail Tyurin. They will return home in May.

On Friday, March 7, the Expedition 38 crew boarded the Soyuz spacecraft, which is docked at the space station’s Poisk module, for a simulated run-through of their landing.

So far eight Japanese astronauts have been in space. Wakata’s assumption of command is viewed a major milestone for JAXA. As commander, Wakata’s responsibilities will include communicating with NASA and with various dignitaries, and ensuring the safety of the crew in the event of an emergency. JAXA Executive Director Yoshiyuki Hasegawa said that the United States, impressed with Wakata’s technical skills and his work as an administrator of astronauts’ schedules, confidentially contacted JAXA in the early 2000s about having Wakata serve as an ISS commander. He was officially chosen as the Expedition 39 commander in 2011 in a meeting of the space agencies of the United States, Japan, Canada, Europe, and Russia.

Mamoru Mori, the first Japanese astronaut to fly in space, said, “[Wakata’s] appointment as the ISS commander proves that Japan was finally recognized as a partner on an equal footing.” Wakata is a space flight veteran with four flights into the black under his belt. Photo Credit: NASA

Wakata holds a B.S. in aeronautical engineering and a Master’s in Applied Mechanics. He was selected in 1992 by the National Space Development Agency of Japan (JAXA’s original name) as an astronaut candidate. His first flight was as mission specialist on STS-72 aboard the space shuttle Endeavour in 1996. His second flight was STS-92 aboard Discovery in 2000. It was his first visit to the fledgling International Space Station, where he operated the robotic arm to install the Z1 truss. In 2009 Discovery took him to his first extended stay aboard the ISS as flight engineer on Expedition 18.

Expedition 39 marks Wakata’s fourth flight into space, more than any other Japanese astronaut to datet.

In addition to his space flights, Wakata has helped in the design of the ISS’s Kibo module and served as a robotics instructor. In 2006 he participated in NASA’s Extreme Environment Mission Operations (NEEMO) in the Aquarius underwater laboratory, an undersea facility off the Florida coast which simulates missions to the asteroids and Mars.

The station resides some two hundred fifty miles above the surface of the Earth and circles the planet every ninety minutes at a speed of about seventeen thousand miles an hour. Its construction began in 1998 and was completed more than a decade later in 2011. NASA recently received an extension for the orbiting facility which should see it remain on orbit through 2024.