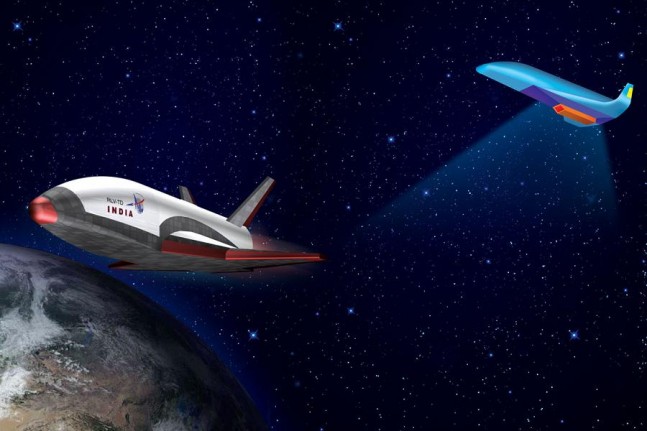 The Indian Space Research Organisation (ISRO ) is planning the first test of its homegrown fully Reusable Launch Vehicle (RLV). The RLV-TD (Technology Demonstrator) mission is currently scheduled to be sent aloft in late July or early August, according to M.C. Dathan, the Director of Vikram Sarabhai Space Centre (VSSC).

The RLV, resembling a small winged aircraft, will be launched up to an altitude of 43 miles (70 km) from atop a solid booster rocket and then released. The spacecraft will re-enter the atmosphere and travel back to Earth in a controlled descent, to be recovered from the sea.

“It will be a winged vehicle that will take off vertically like a rocket and glide back to land horizontally like a plane,” said S. Somanath, the VSSC Deputy Director.

The development of RLV is in the final stages. The spacecraft has been configured to act as a flying test bed to evaluate various technologies; namely, hypersonic flight, autonomous landing, powered cruise flight, and hypersonic flight using air-breathing propulsion.

“The first stage burns on solid fuel. Atop it is the space plane which will return to Earth after the flight,” said ISRO chief Kiran Kumar. A 2.5 mile (4 km) runway would be constructed for the RLV to make a horizontal landing in the subsequent test flights.

The RLV would be powered by an air-breathing scramjet currently under development. The first prototype of the scramjet with a 10 kg thrust is due to be tested in about one month’s time, followed by the development of a test facility for a more powerful engine.

“Development of RLV is a technical challenge and it involves development of cutting edge technologies. The magnitude of cost reduction depends on development and realization of fully reusable launch vehicle and its degree of reusability,” said Jitendra Singh, India’s Minister of State in the Prime Minister’s Office.

The test is a part of a larger plan to build a fully functional two stage to orbit (TSTO) fully re-usable vehicle.

If successful, the program would reduce the cost of space missions, making India more competitive in the launcher market.

As much I would like to see other companies besides SpaceX try out and succeed with the concept of reusability, this Indian attempt looks like going back to the SpaceShuttle days which were very unsuccesful from a cost perspective. Landing on salt water does not seem very efficient for speed of reusability. Furthermore the craft cannot fly like an airplane but uses “controlled descent”, meaning like the SpaceShuttle. So please, anyone attempting reusability, copy SpaceX’s ideas about propulsive landing on land and try to better this process. That would be real and more productive competition to SpaceX.

Unfortunately I cannot edit my previous comment, so the salt water part can be deleted, since that is only the test phase. Later they will attempt a landing on a runway. Still, landing propulsively is way more advanced and should be persued by serious competitors to SpaceX.

ISRO thinks differently, so you can’t say that it is like going back. If you know about Chandrayan, the moon mission, everyone ridiculed it that there is no point in spending lots of money and redoing what NASA has already done. And people also said what’s the big deal in going and orbiting moon when others have landed on it decades ago.. But to everyone’s surprise ISRO had different plans altogether.. the idea of not landing was to do the mineral mapping… and look what we have today as the result? Chandrayan discovered water ice using its mineral mapper.. even before NASA did!!!

Hmmm… so, According to you, Boeing’s X-37, to which this is a similar configuration, is a dead end, a shot in the dark? DreamChaser as well? also, ESA is testing lifting body designs… they are all going in the wrong direction? Space Shuttle design was not successful because it tried to do everything. Something like X-37, scaled up 2x, with a crew of six, and a separate cargo-only module, would have been a way to go – that would still fly today. And I think it IS a way to go.

Yes Mitch, these non propulive landing designs are destined to be non competitive with SpaceX’s Dragon 2 design. Just look at the benifits of propulsive landing vs unpowered gliding runway landing. You will always need a runway. Very unsave in case of calamities. Also impossible to land on Mars, Moon or asteroid without building a runway first. So from a cost, safety and usefulness perspective, these other designs are indeed not helping us forward. Sadly the money and effort spend on their development is a waste.

To Ray, I was referencing the hardware techniques/design of the rockets and spacecraft only, not commenting on the science experiments.

This Indian TSTO winged vehicle is ” Back to the Future”. it is very remininscent of Eugene Saenger’s horizontal take off/land 2-stage winged concept. The Austrian engineer was way ahead of his time in certain areas, such as scramjet technology and lifting body spacecraft. His TSTO was on the drawing board in the early 1960’s ( he died in ’64).

I always though the concept was sound. Apparently , ISRO does too. What are the Skylon people in Britain up to these days ?

RLV-TD’s final goal is to achieve the engineering required to build Avatar, which is a SSTO vehicle. That is what ISRO has in mind…

Yeah, and therein lies the problem. It NEEDS a runway. It cannot land anywhere but on a runway. So in order to land on the moon or on Mars, you first need to build a runway. For safety its a disaster. In case of calamities you cannot land if you have no runway.

@TOMARSANDBEYOND: I think you are confusing 2 things here. RLV is not supposed to land on other planets or moon. It’s a cheaper access to space – to put satellites in the orbit. And if the cost is going down by 90% as they claim then this is a HUGE landmark. In space industry, even a 2-3% price reduction is grabbed with both hands.

Secondly controlled landing requires separate propulsion module suitable for subsonic speeds – which again adds a lot of weight. Plus you usually don’t see two different propulsion systems in one vehicle. This RLV already has Scramjet, intended for hypersonic use. Let me wait to hear more about RLV before commenting further.

India Space Research Org doesn’t wish to compete with any Space Agency.
We lag far behind compared with US, European or Chinese space Agencies.
The Best that ISRO is trying for is bringing down the cost of SAT and other science mission launches to 10 % level.
ISRO is eyeing for the multi Billion $ SAT launch market, which will garner both revenue, Fund future space missions and R&D.
Another space X sat gave a fireworks display yesterday. Space X is the future but now they need to stick to basics n simplicity which they don’t.
The Second and Third World is eying for ISRO To give them space launch services at affordable prices.
With economy bleeding day after day, who knows even 1st World may look towards ISRO.
But important thing is those guys at ISS cannot last beyond 4 mths, as their supply bus evaporated.

ISRO should try to go several notches high instead of beating the old path of expendable rockets. So they should contact Prof John Searls in US and straight away develop a working flying saucer prototype developed by him.

I think many got confused with comparing with nasa space shuttle. In any launch vehicle stages get seperate and dumped In to sea. Last stage get burned up In the atmosphere reentry. What RLV think to do is to bring back the Last stage back for reuse and scramjet for reduced fuel load. The booster stage can also brought back saftly just like spaceX thus saving the entire launch vehicle for reuse. RLV is for low cost launch service not for planatery exploration. Isro has long way to go before they perfect it and they are in right direction that too with shoe string budget.

There seems to be a confusion regarding the role of this vehicle. This is NOT a space shuttle. It is a RLV, it is able to launch. So a winged first stage rocket.

Fundamentally what SpaceX is doing, but instead of using rockets to land back, it is winged !

The RLV is suppose to launch itself, cruise using scramjet, and the front protion has second stage which will detach and place the statelite in orbit.

The first stage will glide back to earth !

@NIT
So am I right in presuming it needs a runway to land on? So it is not capable of landing on other planets or moons or asteroids? Can it land on Mars without a runway? And what are the emergency safety capabilities if the astronauts are not on top of the vehicle?

This test was not going back to the Space Shuttle days. The RLV – TD was a suborbital re-entry flight test, not a low-speed approach and landing test; that is why it landed in the sea (like the U.S.’s ASSET and X-23A [SV-5D] PRIME lifting body re-entry test vehicles). Later RLV – TD test vehicles will conduct low-speed flight and approach and landing tests, including runway landings; ISRO’s people know what they’re doing.