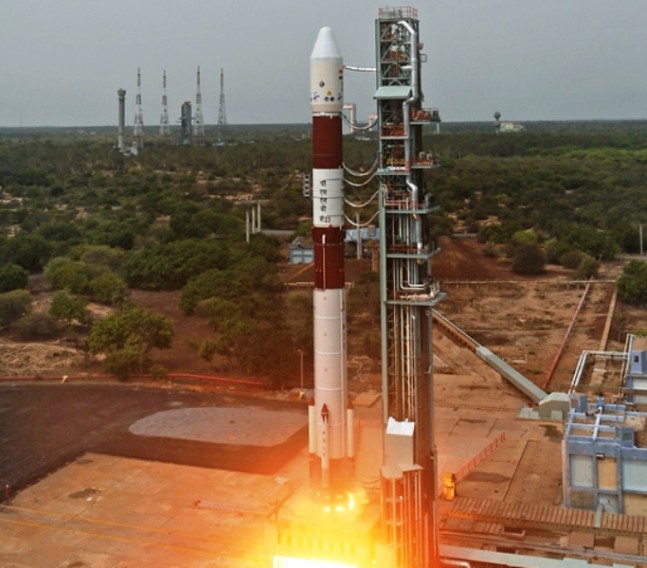 The Indian Space Research Organization or “ISRO” successfully launched five satellites to orbit including the French Earth Observation Satellite Spot 7 as well as four other co-passenger satellites from SDSC SHAR, Sriharikota. Liftoff took place at 12:22 a.m. EDT (0422 GMT) from the Satish Dhawan Space Center. The ISRO utilized the PSLV-C23 launch vehicle to carry out the task of sending the five spacecraft aloft. SPOT-7, will join an identically-designed satellite on orbit in providing high-resolution imagery of objects as small as just 10 or so feet in length. The satellite weighs in at more than 1,500 lbs. The spacecraft is expected to have an operational life of about a decade.

This launch was an international affair. Joining Spot-7 are the co-passenger satellites AISat (Germany) NLS7.1 the Canadian spacecraft (Can-X4) and NLS7.2 (Can-X5) each weighing 33 lbs (15 kg), and VELOX-1 from Singapore, which weighed 7 lbs (15 kg). The five spacecraft were launched thanks to an agreement with the aerospace organization Antrix.

Spot 7 will eventually be placed some 180 degrees from its sister spacecraft, SPOT 6. These spacecraft will be used to image a variety of targets from points around the world.

AISat is dedicated to maritime safety. The German nano-satellite has been fitted with an array of antennas so as to receive transponder signals during sea rescue operations.

The Can-X4 and 5 spacecraft are being flown so that Canada can develop research into whether-or-not satellites can be accomplished with sub-meter tracking error accuracy.

VELOX-I is described as Singapore’s first nanosatellite that will operate in Low Earth’s Orbit (LEO). The tiny spacecraft is part of the Nanyang Technological University’s Undergraduate Satellite Program. The project is designed to provide students with real-world aerospace experience.

It only took some 19 minutes before the spacecraft were on orbit with the ISRO declaring the flight a success shortly thereafter.

The five satellites were integrated with the launch vehicle and tested out about 10 days ago. Shortly thereafter, the Readiness Review (MRR) Committee and the Launch Authorization Board (LAB) met and provided the green light for the launch to move ahead. The official countdown actually began more than two days prior to liftoff – on June 28. The five satellites were carried through Earth’s atmosphere within the PSLV’s payload fairing. Photo Credit: ISRO

The Polar Satellite Launch Vehicle (PSLV) has proven itself to be an asset for the ISRO, having successfully carried out 23 successful missions in a row out of a total of 27 flights according to a report appearing on SpaceFlight Now by Stephen Clark. The rocket has four stages and stands some 144 feet tall (44 meters) and has the capability of sending payloads weighing as much as 7,000 lbs (3,250 kilograms) into orbit. It has been used to launch the Chandrayaan-1 lunar probe as well as India’s first mission to Mars, the Mars Orbiter Mission (MOM).

“India’s space program driven by a vision of service to humanity,” said Indian Prime Minister Shri Narendra Modi who noted the ISRO’s lunar mission. “…we have pushed beyond mediocrity to achieve excellence.”